"They have created their era, let me be Hardik Pandya. Let's stop comparing me with anyone. I will be happy if you don't," he said. 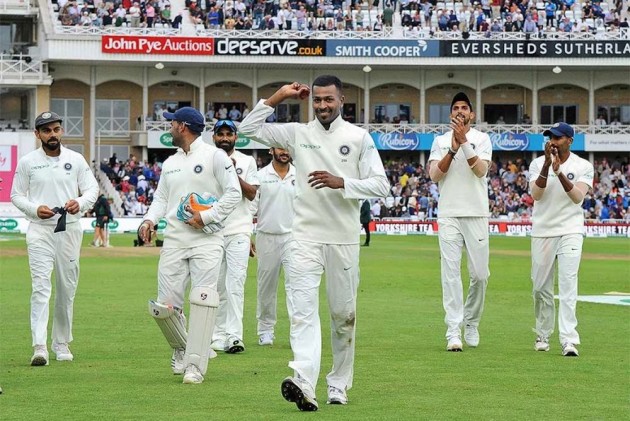 After taking his career-best figures of 5-28 playing against England, Indian all-rounder Hardik Pandya has slammed his critics and said comparisons with Indian legend Kapil Dev are unwarranted.

Pandya’s magical spell helped India bundle England out for 161 in reply to India's 329 in the first innings of the Third Test. The visitors finished day two on 124-2, thus taking an overall 292-run lead.

"They have created their era, let me be Hardik Pandya. Let's stop comparing me with anyone. I will be happy if you don't," he said on Sunday after a game-changing performance.

In a recent interview to ESPNcricinfo, former West Indies fast bowler Michael Holding had said Pandya was not ready to take the all-rounder's position in India's Test team and that he was not effective as a batsman and lacked control and consistency with the ball.

"The (Indian) attack has not been the right balance…Apparently they are playing Hardik Pandya as an all-rounder to help out with the bowling. When he bowls he isn't as effective as he should be. If he was a good batsman, if he was getting runs - 60s, 70s, not even regular hundreds - at the number at which he bats and then he bowls and gets two or three wickets, happy, hallelujah. Happy with that. But he is not getting the amount of runs that can then allow him to get a wicket or two in the Test match. That doesn't work."

On Comparing to Kapil Dev, Holding said: “I heard a mention, when I was working in South Africa: 'he is the next Kapil Dev'. I ain't going to tell anybody he's not going to be the next Kapil Dev, but he is nowhere near there yet. And they need to find someone who can contribute a lot more to this team right now."

Pandya ran through the England line-up after Mohammed Shami and Jasprit Bumrah were unable to hit the right lengths.

"I don't play for them (critics). They are getting paid for saying things which I don't even want to know or care. I play for my country. I am doing the right thing. My team is happy with me, nothing else matters," he said, aiming his guns at the recent criticism that has come after defeats in Birmingham and Lord's.

He said that nothing had changed from the previous matches, whilst also commended the efforts of Ishant Sharma who took 2-32 and revealed that he shares a great chemistry with the seasoned pacer.

"We were bowling the same length that we were bowling in the other games as well. It's just that we were getting enough swing and obviously the situation was such if they played a bad shot it would be India on the up again. So we had the cushion of having runs under the belt," he said.

"If you see the other two games I have done the same thing (bring variations in wrist and grip position). It's just that today I got the wickets, that’s it. I feel that with my bowling style it is important to it because they will get used to it if I come and bowl with the same length.

"I don't swing both ways that much, and my outswing is my main ball so that's why I keep on using. It makes difficult for them to get it exactly where I am bowling," he added.

Talking about Sharma's influence, Pandya said, "Ishant and I, we keep talking about the game because I love to improve no matter how. So as bowlers we keep on taking. Captain has lots of things under his belt here, so as a bowling unit we need to step up and think in our way as well. We are going to make life difficult for the batsmen and Ishant was telling me the same thing – don't go for the wickets.

"If you keep bowling at the rights areas, you have the talent to get them. That's the same thing I tell him and same thing that we tell other bowlers too. Keep it tight, let's see what they do, let's check their patience and once again we saw the result what happens."

Last year in Sri Lanka, Pandya had scored his maiden Test hundred at Pallekele. He said that the five-wicket haul gave him more pleasure.

"I am happier with taking a five-wicket haul than scoring a hundred. I have taken very few five wicket hauls. I think this is the second of my life, and it has come at a very important place/juncture so I am very happy,” said the all-rounder.

"Yes England have a few important players. If you get them out, they get into trouble. But cricket is a very funny game. If you see the Lord's Test, the game was equal and all of a sudden (Chris) Woakes came and scored a hundred.

"So, all are capable, and that's why they are playing for England. I always believe that till we don't get eleven (wickets), we should not be relaxed. They have problems but we will like to take them as many times as we get," he added.

Last but not the least, he praised youngster Rishabh Pant who became the first Indian wicketkeeper to take five catches in his first Test.

"Rishabh Pant is an amazing player. The confidence he has – when I was new in the team, I was same like that. I get that feeling when I see him and it hasn't been too many years for me either. Looking at the confidence in him, he will play for long. He is a horse for the long race. He will do well and he is not afraid of anything. If in this field, if someone plays as freely, success will come," said Pandya.

"Even yesterday when he came in, the way he batted was amazing. He was saying 'I am nervous'. I looked at the board and said 'I have played 55 balls and scored 18, you are already 18 in some 23 balls'.

"We were making fun as well and he is amazing behind the stumps, KL (Rahul) as well – when you know someone is catching so well, you know as a bowler if you create a chance they will grab it," he signed off.