A shooting incident in Jama Masjid area in Delhi sets off alarm bells in security circles, as an Indian Mujahideen connection is explored 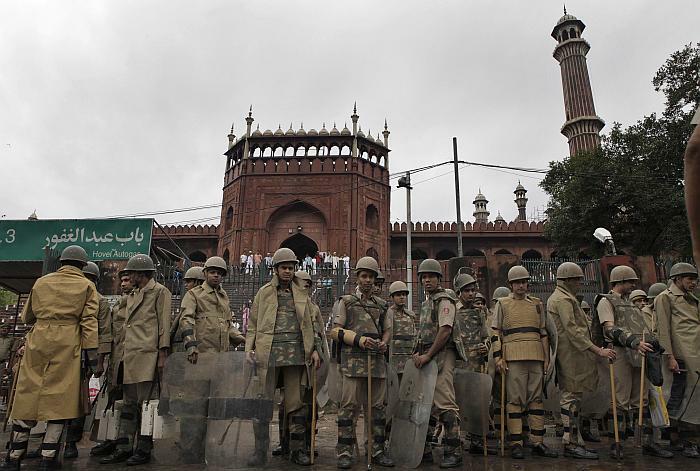 Two Taiwanese tourists are reported to have been injured outside the Jama Masjid in New Delhi on September 19, 2010, when they were attacked with a hand-held gun by two unidentified persons on a motor-cycle.

The British Broadcasting Corporation has quoted an eye-witness as stating as follows: "The two terrorists came on a motorcycle and the man riding pillion first fired randomly at the mosque and then fired in the air and at the people, and then he fired on the bus in which the tourists had come.After emptying his gun, the terrorist replaced the magazine and began firing again."

The assailants then got away. It has been reported that the assailants dropped their gun on the road before fleeing.

A news channel is reported to have received an e-mail purporting to be from the Indian Mujahideen (IM) claiming responsibility for the attack. The mail had reportedly been sent from the address al-arbi999123@gmail.com .The word al-arbi had figured in the e-mail sent by the IM on July 26, 2008, after the terrorist attacks in Ahmedabad.

The attack on the Taiwanese tourists took place on the second anniversary of an incident in which two suspects of the IM were killed in an exchange of fire during a raid by the Delhi police at a hide-out of the IM. A Police Inspector too died as a result of injuries sustained during the exchange of fire.

While the authenticity of the e-mail is still to be established, some of these details would lend credence to the possibility of  some still absconding members of the IM having been involved in the incident. However, the past incidents organised by the IM involved the use of improvised explosive devices (IED) against soft targets and not hand-held weapons. In the 26/11 terrorist strikes in Mumbai, the LET had used explosives as well as hand-held weapons.

The modus operandi (MO) of two assailants approaching a target on a motor-cycle, with the man in the pillion seat opening fire is often followed by the anti-Shia Lashkar-e-Jhangvi (LEJ) of Pakistan and by jihadi terrorists in Southern Thailand. Some Khalistani terrorists in Punjab  had used this MO in the 1980s. In Pakistan, there is a ban on pillion riding because of the use of this MO by the LEJ.

The LEJ is close to Ilyas Kashmiri of the so-called 313 Brigade based in North Waziristan in Pakistan, who had issued a threat earlier this year to disrupt the CWG (Commonwealth Games). According to the media, the e-mail warned the Government not to hold the Games and added: "We know the preparations are on in full swing. Be prepared, we are preparing a shocking event and those participating in the games will hold themselves responsible for the consequences."

The incident and the e-mail message should not be dismissed lightly until the assailants are arrested and interrogated. One should avoid over-confidence regarding the security arrangements and minutely re-visit the security drill to identify and remove any deficiencies. While there is no need for any panic, any casual approach to the incident would be unwise.