Hardik Pandya and KL Rahul have been suspended pending an inquiry for their sexist comments on a TV chat show and the matter is pending in the Supreme Court. 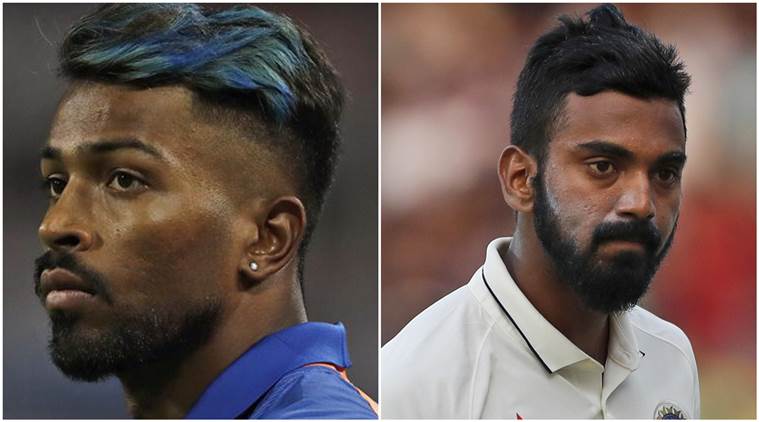 Days ahead of the start of India's limited-overs series in New Zealand, acting president of the Board of Control for Cricket in India (BCCI) C K Khanna on Saturday defended Hardik Pandya and K L Rahul, asking the all-powerful Committee of Administrators (CoA) to consider reinstating the suspended cricketers into the national team while the inquiry is on.

Pandya and Rahul, who made much-criticised sexist remarks on popular TV chat show 'Koffee With Karan', have been suspended pending an inquiry and the matter is pending in the Supreme Court.

In a strongly worded letter to the CoA, Khanna said that the cricketers made a mistake but treating them as lawbreakers is wrong.  He also said that calling the Special General Meeting (SGM) to appoint an ombudsman to investigate the two players' conduct, as demanded by Board officials, wouldn't be right as the Supreme Court is due to take up the issue next week.

"They made a mistake, and they have already been suspended and called back from the series against Australia. They have also submitted an unconditional apology," Khanna wrote in the letter.

"I suggest that pending inquiry we reinstate both the cricketers into the Indian squad immediately and allow them to join the team in New Zealand at the earliest," he added.

The CoA wants the Supreme Court to appoint an ombudsman to decide the fate of the two players, who have already missed the ODI series against Australia and are set to sit out of the tour of New Zealand as well.

They have also been thoroughly lambasted for their comments on hooking up with multiple women and joking about it on the show.

Around 14 state units, mainly former BCCI president N Srinivasan's loyalists, had requested Khanna to convene an emergent SGM, which needs to be called in 10 days. But he is unlikely to attend the meet.

BCCI Treasurer Anirudh Chaudhry also wrote to Khanna requesting for an early SGM, so that board members can take a call on the appointment of the ombudsman.

"As per constitution of the BCCI, an ombudsman can be appointed at the Annual General Meeting (AGM). And moreover, the matter (appointment of ombudsman) is already sub-judice," Khanna replied to Chaudhry.

"Why would Khanna or Amitabh sign the notice for convening Special General Meeting when the matter is in Supreme Court. There would be a risk of Contempt of Court," a senior BCCI official privy to the development told PTI on conditions of anonymity.

However, the official agreed that CoA chief Vinod Rai should have vetoed co-member Diana Edulji's demand for provisional suspension and taken a call on the quantum of suspension for the two suspended cricketers.

"As per protocol, Mr Rai sought Diana's suggestion but he could easily overrule her view of getting a legal opinion, which started this mess. He (Rai) could have easily done what he did in the women's coach selection case," the official observed.

The acting president urged the CoA and BCCI office-bearers to resolve the matter as soon as possible.

"What Mr Hardik Pandya said and Mr K.L. Rahul acted as a bystander to is inappropriate and absolutely wrong, but in my personal opinion, to treat them like lawbreakers is wrong too," he wrote.

"Both these cricketers need game time before the World Cup which starts in four months time. We should give these growing cricketers chance to correct themselves morally," he signed off.

India will play five ODIs and three T20Is in New Zealand against the Black Caps. The first ODI is scheduled for January 23 at Napier. The tour completes on February 10 with the third and final T20I at Hamilton.