Draupadi Is In Rajya Sabha, But Where's Ram?

There are reasons to believe that Draupadi will sizzle in the Rajya Sabha and perform much better than most other nominated members. But why has the BJP left out Ram? 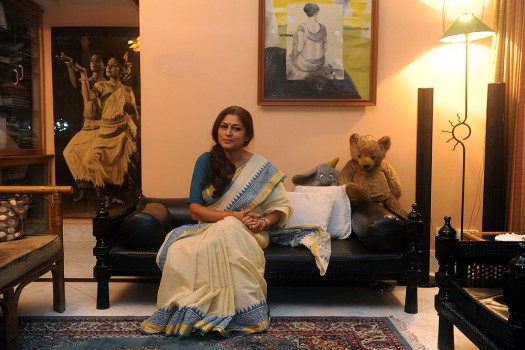 Draupadi  is the flavour of the season.

A play based on late Mahasveta Devi’s  short story ‘Draupadi’  staged last month at the Central University of Haryana was dubbed ‘anti-national’  for  a scene depicting a uniformed  soldier raping the protagonist.  And now comes the nomination of Roopa Ganguly,  who heads BJP’s Mahila Morcha in Bengal, to the Rajya Sabha.

Now that Draupadi ( Roopa Ganguly)  has followed  Ravana (Arvind Trivedi), Sita (Deepika), Hanuman (Dara Singh) and Krishna (Nitish Bharadwaj)  to Parliament, one is left wondering why Rama (Arun Govil) has been left out.

While reports indicated that Govil was interested in joining the BJP or at least campaign for the party, the reel-life Rama does not appear to have found much favour with the party. Perhaps he is far too mild for the party or the image of ‘Rama’ is not aggressive enough for the hurly burly of today’s politics.

Roopa Ganguly (49), like Dara Singh earlier, has been nominated by the President to the Rajya Sabha. The other actors from the TV serial ‘Mahabharata’ and ‘Ramayana’ contested elections and got into the Lok Sabha.

Like Smriti Irani who lost two consecutive Lok Sabha elections, Roopa also lost when she contested in the assembly election in West Bengal earlier this year, coming third in Howrah North constituency where Trinamool Congress candidate and cricketer Laxmi Ratan Shukla came first. But like Irani, electoral defeat has not come in the way of Ganguly’s meteoric rise in politics.

The announcement appears to have caught BJP leaders in Bengal by surprise.

Soon after the announcement,  some of them began quipping that Rupa (meaning ‘silver’ in Bangla) has been conferred with the gold, suggesting that she somehow did not deserve the seat.

There was also surprise among BJP leaders in the national capital, where for the past several weeks the buzz was that actor Anupam Kher or TV personality and the PM’s old friend Rajat Sharma were frontrunners to occupy the seat vacated by cricketer-commentator-turned-stand-up-comic  Navjot Singh Sidhu.

The feisty actor has had a turbulent personal life.  In an interview before she got into politics, Ganguly had spoken at length about her traumatic marriage and how she tried committing suicide not once but thrice. And decided to leave her husband and son to live with a singer 12 years younger to her. They live in more liberal Mumbai even as she shuttles between the two metros to fulfil her political and social commitments.

In Bengal she runs an NGO which partnered with Johns Hopkins University in the US to facilitate innovative healthcare.

While she as a nominated member of the Rajya Sabha has the option to remain unattached, she is expected to formally add to BJP’s seat strength and fire power in the upper house.  And if her past performance is any indication, she is going to be far more effective than Sidhu, if only because she is known to prepare for her part.

Who, for example, would  imagine Sidhu confessing his weaknesses in public ?  But Ganguly was candid when she was asked about her relative inexperience. “ I am not much aware of history,” she had disarmingly declared before adding, “ I also may fall short as far as political knowledge is concerned.”  But she pledged to work hard enough to overcome the deficiencies.

For this or other reasons, she became the BJP leaders’ favourite in Bengal right from day one.  And while Ganguly does appear to have put off several local leaders and, by some accounts, splurged considerable amounts of the party’s money on her political activities, it is undeniable that she provided much-needed visibility to the BJP in a state where it simply did not exist.

Like Smriti Irani, Ganguly is aggressive and is not afraid of a fight.  During the last Assembly election in Bengal she got into the headlines after cameras caught her slapping a woman supporter of Trinamul Congress. Soon thereafter ruling party supporters attacked her convoy  in which she sustained head injuries. It may have reminded BJP leaders of Mamata Banerjee who herself rose from being a street fighter to be the chief minister of the state. Banerjee too had been at the receiving end of Left Front supporters and the police and bore her injuries as a badge of honour.

It does not therefore come as a surprise that BJP leaders like Kailash Vijayvargiya and Nitin Gadkari, with both of whom she is said to be close, pushed her case.  Ganguly,  a Brahmin like Banerjee of course, is now more than likely to  be the face of BJP’s electoral campaign in the next general election and thereafter in the assembly election. She has age on her side and may just end up in the union council of ministers in the months ahead.

She may well be too glamorous to strike a rapport with the masses or may lack the ability to match the somewhat incoherent oratory of Mamata Banerjee,  but in a state without charismatic leaders, she certainly appears to be a better bet than singer and union minister Babul Supriyo, media personality and Rajya Sabha member Swapan Dasgupta or other local BJP leaders like Rahul Sinha or Dilip Ghosh.

But I wonder what Ganguly’s reaction  as an MP would be to the controversy over ‘Draupadi’, the play in Haryana.