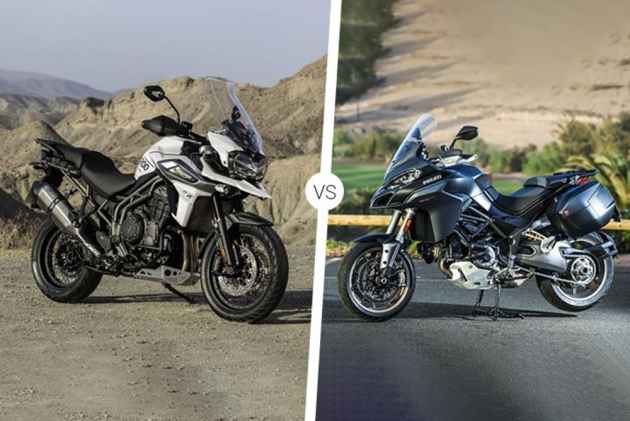 Each year, the adventure tourer segment witnesses phenomenal growth in the Indian two-wheeler market. This growth can be credited to bike manufacturers such as Triumph and Ducati who brought adventure tourers such as the Triumph Tiger 1200 and the Ducati Multistrada 1260 to our shores. Now, both bike makers are gearing up to introduce the latest versions of their popular offerings. Hence, we stack them up against each other to find out who emerges on top. Both motorcycles use a completely different approach when it comes to the powertrain. While both are built to offer better low and mid-range performance, the Italian goes for a twin-cylinder layout while the British bike sticks to its triple-cylinder layout. At the heart of the new Ducati Multistrada 1260S lies the same 1262cc engine that we’ve seen on the Ducati XDiavel. This liquid-cooled, 90-degree L-twin is mated to a 6-speed transmission and produces 158PS of power at 9500rpm and 129.5Nm of torque at 7500rpm. Sure you get six additional ponies than before, but the real surprise comes in the form of a slug of torque which is made available at much lower revs. You now get 85 per cent of torque at just 3500 rpm, to be precise! This helps the bike in negotiating the steepest of climbs without breaking a sweat. In our review we found this motor to be very responsive in low to mid-range while offering a punchy nature that helps you cruise effortlessly on the highway. However, we found the exhaust note to be on the mellow side. The Tiger 1200 XRt is also the most powerful shaft-driven bike in the segment. The Ducati Multistrada 1260S gets LED headlamps with LED DRLs and an all-new TFT instrument cluster. It also gets an updated software which makes navigating through the menus, which include electronic rider aids and damping characteristics of the suspension, a breeze. You can also manage the traction control level, riding modes, cornering ABS, Ducati wheelie control, cornering light and other safety features using the display. In addition to this, Ducati has also developed an app which allows the riders to save the bikes settings on their phones. Everytime the phone is paired with the bike, the settings will be updated automatically. This app will be available from April 2018. As this is an adventure-tourer at heart, Ducati has made sure that they load the Multistrada 1260S with tons of features. Other than keyless ignition, which can sense the key even if it's few feet away from the bike, you also get heated grips to combat cold terrains, ride-by-wire throttle, a bi-directional quickshifter for more seamless gearshifts, a tyre-pressure monitor system and cruise control. The Triumph Tiger 1200 XRt is no chump when it comes to features either. The XRt comes equipped with LED headlights and LED DRLs that now run across the lamp for a unique look. Along with it, you also get adaptive cornering light and a highly customisable, full-colour TFT console that we’ve seen on the Triumph Street Triple RS. The display is controlled by a backlit five-way joystick through which you can control five different riding modes and other settings. Hop on to the saddle and you'll notice Triumph has equipped the Tiger 1200 with heated seats for the rider and pillion along with heated grips. In addition to this, you also get hill hold control, cornering traction control, keyless ignition and a 12V USB power socket so that your smartphone never runs out of juice while on the go. The Tiger also comes with ride-by-wire technology for an enhanced throttle response, a bi-directional quickshifter, hill hold control, Triumph shift assist and an updated cruise control system. The Triumph also benefits from electrically adjustable windscreen as opposed to the manual unit found on the Ducati. The Ducati Multistrada 1260S is held together by a tubular steel trellis frame. Suspension duties here are handled by Sachs 48mm forks with adjustable spring preload travel at the front and Sach rear shock absorbers with adjustable spring preload with 170mm travel on both sides. Ducati has equipped the new machine with Brembo M50 330mm twin discs at the front, Brembo 265mm two-piston calipers at the rear and ABS as standard. Thanks to a 48mm longer swingarm, the wheelbase has gone up by 56mm when compared to its predecessor (1529mm). Ducati has made sure you can crunch a good number of miles on the saddle with a 20-litre fuel tank. Speaking of the saddle, the seat height can be adjusted between 825mm and 845mm. The Ducati Multistrada 1260S tips the scale at 235kg (kerb). The Pirelli Scorpion Trail II tyres (front - 120/70 R17 and rear -190/50 R17) and cornering ABS make sure everything is kept in check . The 2018 Triumph Tiger 1200 XRt also utilises a tubular steel trellis frame. Suspension duties are handled by WP 48mm USD forks with 190mm of wheel travel and WP monoshock with rebound damping adjustment and 193mm of wheel travel. Braking duties are taken care of by twin 305mm floating discs at front and a single 282mm disc at the rear. It gets cornering ABS too. When compared to the Ducati, the Triumph has a smaller wheelbase at 1520mm. At 20-litres, the fuel tank capacity is similar to that of the Ducati Multistrada 1260S. The saddle sits between 835mm-855mm off the ground and there is even a low seat height option which further drops it to 790mm to 810mm. The bike tips the scale at 242kg (kerb). The front 120/70 R19 and rear 170/60 R17 wheels are shod with Metzeler tyres. We expecting the new Multistrada to arrive in India by the first half of 2018. It is expected to be priced in the range of Rs 18 - 19 lakh (ex-showroom Delhi). The 2018 Triumph Tiger 1200 XRt is also expected to be launched sometime next year. It could come with a price tag that’s closer to Rs 20 lakh (ex-showroom).