After a gap of three years, Durand Cup finally returned with Mohun Bagan taking on Mohammedan Sporting in the tournament opener at Salt Lake Stadium (Kolkata), on August 2 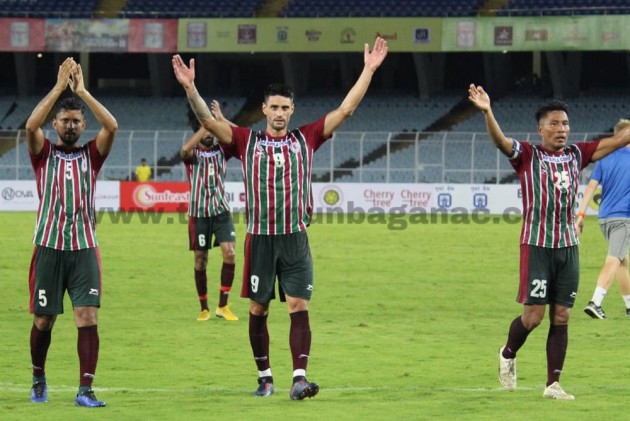 A Spanish-flavoured Mohun Bagan dazzled with a brace by Salvo Chamorro as the Mariners kick-started the 129th Durand Cup with a 2-0 win over Mohammedan Sporting at Kolkata on Friday.

Just a minute after West Bengal Chief Minister Mamata Banerjee inaugurated the oldest tournament of Asia amid a heavy downpour, the former Barcelona B and Villarreal B forward clinically headed one home from a free-kick by his compatriot Joseba Beitia.

20 minutes later, Chamorro virtually killed the contest with another brilliant header from a through ball by Ashutosh Mehta, giving their Spanish coach Kibu Vicuna a perfect debut.

Vicuna tested all his four Spanish recruits with Chamorro spearheading the attack along with fellow mates Beitia, while Fran Morante held the backline.

In the 59th minute, Francisco Gonzalez replaced Morante as they held on to the scoreline to give the 16-time champions three points from their group B opener.

The Subrata Bhattacharya-coached Mohammedan Sporting pressed hard for a comeback and their best chance came at the stroke of half time, but Shilton Paul came out with a brilliant save to deny Ivorian forward Arthur Kouassi.

In the 82nd minute, there was a misunderstanding between Tirthankar Sarkar and Kouassi, as Mohammedan Sporting failed to covert another opportunity.