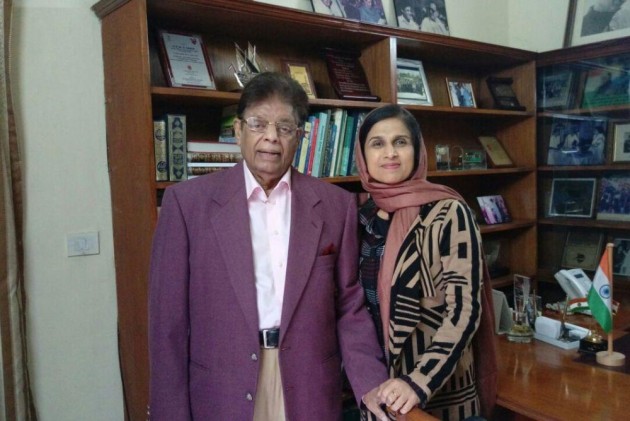 On January 31 night, when Delhi’s RML hospital was accused of delaying`the death news of former Minister and sitting MP E Ahamed for political gains, it was an unlikely face clad in hijab that was taking on the hospital -- Ahmed’s daughter Fouzia Shersad.

With her fierce fighting spirit desmotrated during the days that followed, Fouzia has emerged as the new icon of the Muslim women in Muslim-dominated Malabar region of north Kerala. Many workers of Ahamed's party, Indian Union Muslim League (IUML) of which he was the national president, have urged her to contest the by-poll necessitated due to his death.

Independent observers see her as a ‘hope’ in her father’s party, which is otherwise known for its patriarchal and misogynist policies . IUML had refused to give a single ticket for women candidates in the past two assembly elections in the state. Recently a top leader of the IUML invited public ire after he denied permission to the state president of his party’s women’s wing to speak on a public platform saying there’s no history in the party of a woman addressing a gathering of men. IUML was in news earlier for a video that went viral on social media where party workers were seen insulting a defeated woman candidate by making obscene gestures at a man dressed like a woman in burqa, which was widely seen as an attack on the women coming out in political mainstream.

A source close to Ahamed's family has admitted that some party leaders, in their personal capacity have urged the late leader’s children to take their father’s legacy forward. The person told Outlook that Ahamed’s children- Fouzia and her two brothers- have not thought about entering politics. The person, however, added that they understand politics better than anyone as they are born to a father who had one of the longest legislative careers in the state- five terms in the Kerala assembly and seven terms in parliament.

The party circle is abuzz with rumours that much-besmirched former state industries minister PK  Kunhalikutty is keen to contest in the by-election. However, the decision is taken by the powerful Panakkad family who are the political and spiritual leaders of IUML. The party, which is the second most important constituent of the Congress-led United Democratic Front (UDF) in Kerala, is also worried about Kunhalikutty moving to Delhi as he is the party’s backbone in state politics.

IUML feels that it won’t be an easy task to find a successor for Ahamed who was its face in the national politics. Ahamed enjoyed intimacy with the Gandhi family and had represented India ten times in the United Nations and was considered India’s ambassador in the gulf countries, a region which is crucial for his constituents in terms of employment and economy.

Fouzia graduated from Thiruvananthapuram Medical College in the 1980s when many Musilm women in the state did not pursue education beyond 10th standard, one of her family members told Outlook. Fouzia is currently the Director at the Institutional Effectiveness Unit of the Dubai Medical College. “She believes in women’s empowerment and takes much pride in the girls’ school founded by her father in Kannur.”

Fouzia has been invited to speak at the condolence meetings organised by the party units. It was Fouzia and her husband Babu Shersad, both medical practitioners, who blew the lid off the RML’s alleged conspiracy to delay the announcement of Ahamed’s death. She was not only a strong voice who vociferously spoke up against the hospital’s ‘misconduct’ but also revealed herself as the most compassionate and caring daughter. A medical practitioner and teacher, she championed the ethics and dignity of the medical profession while she point-by-point questioned the hospital’s “assault” on her father.

“I was pained a lot. I couldn’t sleep. But, I no longer feel sad. Now I feel that I have a duty because I am a medical practitioner and a teacher,” said Fouzia, adding, “My specialisation is in medical ethics and professionalism. Every day I teach my students how to treat their patients, what’s right and what’s wrong. RML has done the cruelest thing to my father. The whole community of medical professionals in the country will hang their head in shame if they come to know about it.  So, I have to ask RML why they did it. I need an answer from them so that it won’t happen to any other person in future.”

Even though the state doesn't normally endorse dynasty politics, political observers feel that if not for Fouzia, IUML, which has the largest support base among Kerala’s Muslims, cannot hope for a woman leader in the near future.