'Easy To Become CM Than Get Cash From ATM', Twitteraties React To Sasikala Becoming CM

As Sasikala Natrajan prepares to take power as the next Chief Minister of Tamil Nadu and gets elected as the legislature party leader, Twitteraties (Obviously!) share their thoughts. 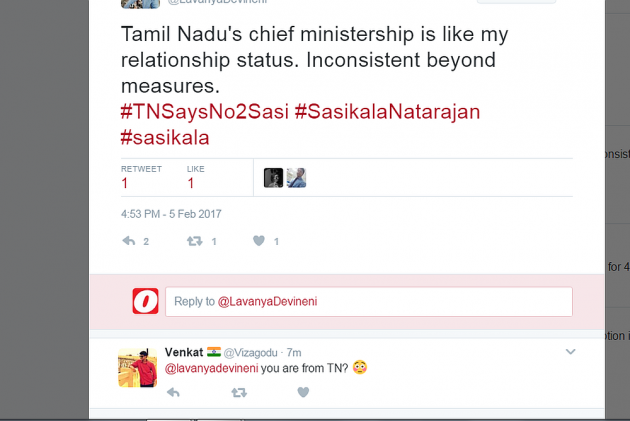 As Sasikala Natrajan prepares to take power as the next Chief Minister of Tamil Nadu and gets elected as the legislature party leader, Twitteraties  (Obviously!) had their own reactions.

#TNSaysNo2Sasi Will the name of "Jaya TV" gets changed to "Sasi TV" ? Why you guys left that also. Adhaiyum pannunga da #SasikalaNatarajan

O. Panneerselvam has been CM thrice
For 6 months, 7 months, 2 months.
Feel bad for him.
He's the Night Watchman of CMs.#SasikalaNatarajan

#TNSaysNo2Sasi #SasikalaNatarajan Sasikala's make up shows that she went to beauty parlour before announcing as the next CM.