Lower GST Rates Comes Into Effect From Today, Eating Out Gets Cheaper 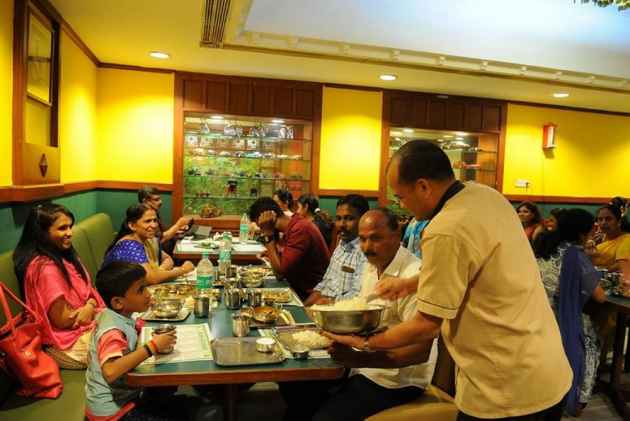 Eating out and mass consumption products have become cheaper as the lower GST rates on over 200 items come into effect from today.

Large retail outlets have also started advertising the downward revised prices of FMCG items like Shampoo, detergent and beauty products on account of reduction in Goods and Services Tax (GST).

The GST Council, chaired by Finance Minister Arun Jaitley and comprising state counterparts, had last week cut rates on these items to provide relief to consumers and businesses amid economic slowdown.

The new tax rates were to come into effect from November 15.

As many as 178 items of daily use were shifted from the top tax bracket of 28 per cent to 18 per cent, while a uniform 5 per cent tax was prescribed for all restaurants, both air- conditioned and non-AC.

Earlier AC restaurants attracted 18 per cent GST, while non-AC ones levied 12 per cent.

Restaurants in starred-hotels that charge Rs 7,500 or more per day room tariff will be levied 18 per cent GST but input tax credit (ITC) is allowed for them.

Those restaurants in hotels charging less than Rs 7,500 room tariff will charge 5 per cent GST but will not get ITC.

GST Council pruned the list of items in the top 28 per cent Goods and Services Tax slab to just 50 from 228.

So, only luxury and sins goods are now only in highest tax bracket and items of daily use are shifted to 18 per cent.

Also, tax on wet grinders and armoured vehicles was cut from 28 per cent to 12 per cent.

Items on which tax rate has been cut from 28 per cent to 18 per cent include wire and cables, furniture, mattress, trunk, suitcase, detergents, shampoos, hair cream, hair dyes, make up, fans, lamp, rubber tubes and microscope.

That on puffed rice chikki, flour of potatoes, chutney powder, fly sulphur recovered in refining crude and fly ash to 5 per cent from 18 per cent.

Tax on idli dosa batter, finished leather, coir, fishing net, worn clothing and desiccated coconut has been cut to 5 per cent from 12 per cent.