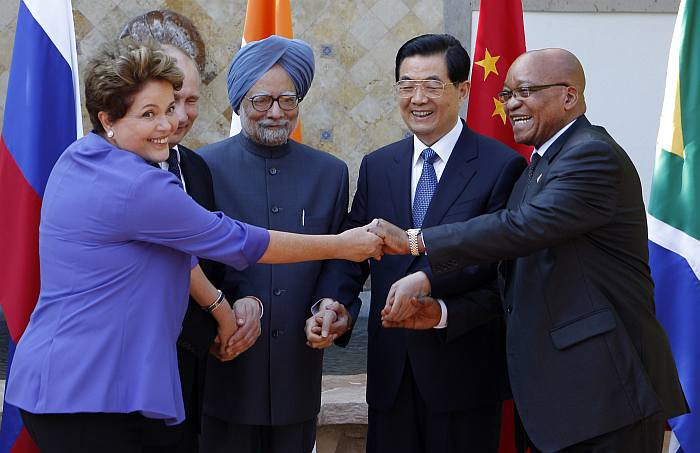 With China’s President Xi Jinping planning to make his first foray into international diplomacy since his election at the BRICS annual summit in Durban and his singer wife slated to perform, the organization will hit the headlines. Again, there will be talk about this loose grouping of Brazil, Russia, India, China and South Africa filling the emerging void left by the troubled US and European Union. But yet another summit and ritual show of unity won’t hide the emptiness at the core of BRICS. The strong display of China’s newfound power by its president will only underline the organization’s lopsided nature and lack of actual clout.

Representing around 40 percent of the world’s population and nearly a quarter of its economic output, BRICS does offer promise of clout. The economic profile of the five nations, especially that of China, has continued to grow with suggestions that BRICS collectively could become bigger than the US by 2018 and by 2050 even surpass the combined economies of G7 states.

Yet a major challenge for ongoing influence from BRICS is China’s dominance over the other four members. For all its promise, BRICS has remained a talk shop aspiring for greatness.

The first formal summit meeting was held in Russia in June 2009 with South Africa joining the group in December 2010, changing the nomenclature from BRIC to BRICS. The Yekaterinburg summit called for “a more democratic and just multipolar world order based on the rule of international law, equality, mutual respect, cooperation, coordinated action and collective decision-making of all states.” Since then the joint statements of the various BRICS summits have repeatedly underscored need for a realignment of the post–World War II global order based on the untrammelled supremacy of the US. As the US is preoccupied with internal troubles and the eurozone is mired in a debilitating debt crisis, a vacuum is increasingly being felt in the international system. This presents an opportunity for the BRICS to emerge as major global players. Plans are underway for some joint projects. The New Delhi summit resulted in a proposal to create a joint BRICS development bank that would finance investments in developing nations, and this year’s summit is expected to conclude negotiations for setting up this bank. 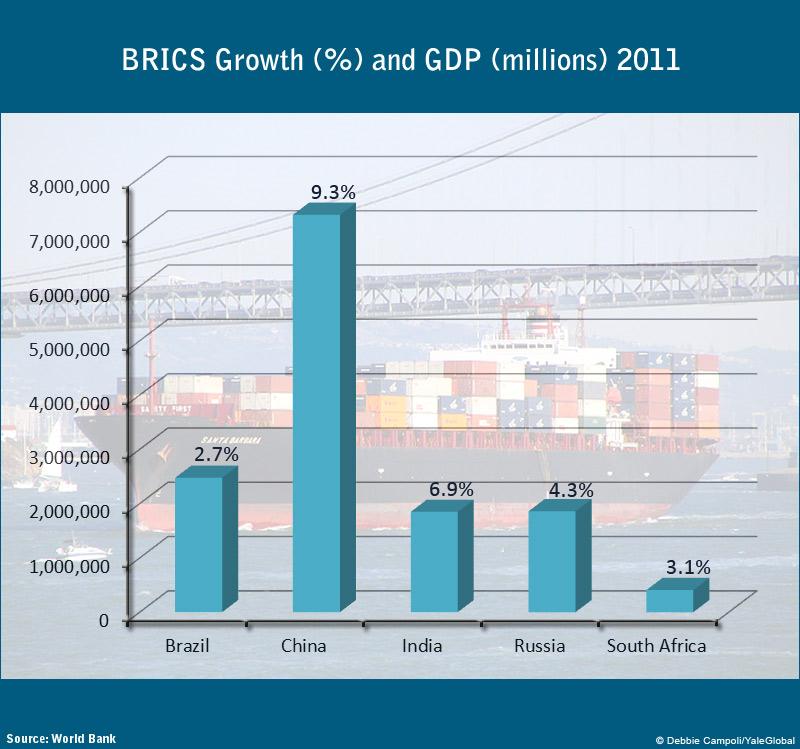 But overall momentum for BRICS, a much-hyped initiative, seems to be flagging. Growth-rate estimates for all the BRICS are steadily declining. Fluctuating economic trends, however, are not the leading reason behind the unworkability of the BRICS idea, but rather the structural disparity at the heart of the grouping.

China’s rise has been so fast and so spectacular that others are still trying to catch up. The Chinese economy is not only the second largest in the world but also larger than the economies of the other four members combined. China’s power makes the other members nervous, leading them to hedge bets by investing in alternative alliances and partnerships even as China’s rapid accretion of economic and political power adds to its own challenges to make friends. Given the leverage that China enjoys in BRICS, it should come as no surprise that Beijing has suggested that IBSA – the grouping of democracies India, Brazil and South Africa – be shut down in favour of BRICS.

China’s manipulation of its currency has resulted in significant problems for manufacturing sectors of other emerging powers. India, Brazil and South Africa all have expressed disenchantment with Beijing’s economic policies at various times. New Delhi has even imposed anti-dumping duties on a range of Chinese goods. China’s dominance of the intra-South trade remains overwhelming with other emerging powers struggling to get a share of the pie. Central bankers from Brazil and India spoke against the undervalued yuan in 2009 and 2010 to little effect.

Russia and China are united in their aversion to a US-led global political order, but elite distrust of each other remains. Though they coordinate in trying to scuttle western policies, as has been the case on Iran and Syria recently, the partnership is one of convenience. Russia’s failure to develop its Far East has allowed China to gain a toehold in this strategic region and allowed Beijing to define the Asian security landscape. And though China is the largest buyer of Russian conventional weaponry, many in Russia see this as counterproductive: China could emerge as the greatest potential security threat to Russia.

Likewise, Sino-India ties have witnessed a steady deterioration over the last few years on a variety of issues – from land border to maritime disputes. Despite the public pronouncements by the two sides, New Delhi remains sceptical of China’s intentions. Beijing’s refusal to acknowledge India’s rise and a lack of sensitivity on core security interests are leading to pushback. With overall bilateral trade worth $55 billion, India’s trade deficit with China rose to $23 billion in 2012.

South Africa’s relations with China are also not as wrinkle-free as so often made out in the popular media. Concerns have been rising that China’s economic power is strangling South African manufacturing while locking up vital resources for years, as the flood of Chinese finished goods to Africa has created a large trade imbalance. Textile mills in South Africa have closed down under the onslaught of inexpensive Chinese imports, leading to public protests. In a somewhat surprising outburst, former South African President Thabo Mbeki had warned that Africa risked becoming an economic colony of China if the growing trade imbalance between the two was not rectified. Though China has its share of supporters in South Africa, its extractive economic policy is leading to growing calls for a more equitable economic relationship.

The fascination with BRICS is partly an offshoot of the discussion on the emerging so-called post-American world. Many commentators argue multipolarity is likely to be the norm. Yet while BRICS may have growing economies, it’s not clear this can translate into power at the global level. Even if the BRICS get their economic act together, the grouping will find it difficult to turn that strength into a unified political force. China’s dominance makes most of the goals articulated by the BRICS states wobbly. The point of this coalition was always to show that the balance of power is shifting toward emerging countries, away from the West’s historical dominance. But a multipolar world isn’t the same as China just trying to tilt the balance of power toward itself.

The narrative surrounding the rise of BRICS is as exaggerated as that of decline for the US. The tectonic plates of global politics are certainly shifting, but their movements are unpredictable. BRICS will remain an artificial construct, merely an acronym coined by an investment banking analyst, for some time to come.