Asif Khan Pathan was 29-years old when the Gujarat riots broke out. They taught him the importance of what he calls the three Es 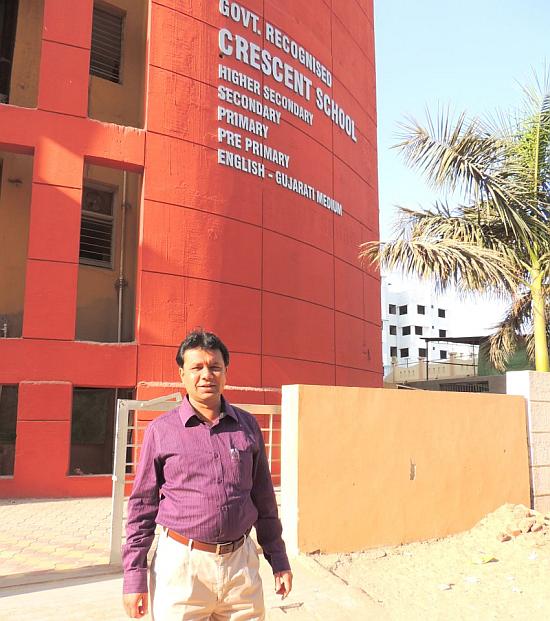 “In elections everyone is promising us lollipops,” Asif Khan Pathan, the director of the Crescent School tells me as he stands on the unpaved road in front of his school in Juhapura. “But we just want a road.”

Once a mixed area of Hindus and Muslims in the 1970s, today Juhapura is the largest locality of Muslims in Gujarat, with an estimated population of 400,000. After the 1985 riots, many Hindus felt uncomfortable and fled. Muslims, some from the old city of Ahmedabad, started moving to the area after they faced months of curfew and violence. Asif’s parents came to Juhapura in 1988 and purchased their home from a Hindu family.

Asif was reluctant to move. He grew up in mixed localities where Hindus always lived nearby, if not directly next door and Asif insisted to his father, a retired district judge, that they should remain in Paldi, an upscale mixed Hindu Muslim area in central Ahmedabad.

“Then my dad told me about 1985. He said in a riot, you only have ten minutes to leave and in Paldi we would not be safe. He was right because the building we once stayed in was eventually burned down.”

Asif always had a passion for education and began offering tuition classes in Juhapura. When I first met Asif in 2011, I made the mistake of asking him if he was affected in the 2002 riots.

“Do not ask who was affected. If we were not affected physically then we were affected financially. And all of us were affected emotionally. It hurt us all and we cannot forget.”

Asif was 29-years old when the riots broke out. The riots taught Asif about the importance of what he calls the three Es: education, employment, empowerment.

In 2008, his father and a few other partners procured a large piece of land just off the Sarkhej Highway in Juhapura. The land was large enough to build a multi-unit apartment building, which could have made Asif, his family, and their investors wealthy. But instead they pooled together their money, along with three other trustees, and created a school to cater to Juhapura’s middle class. 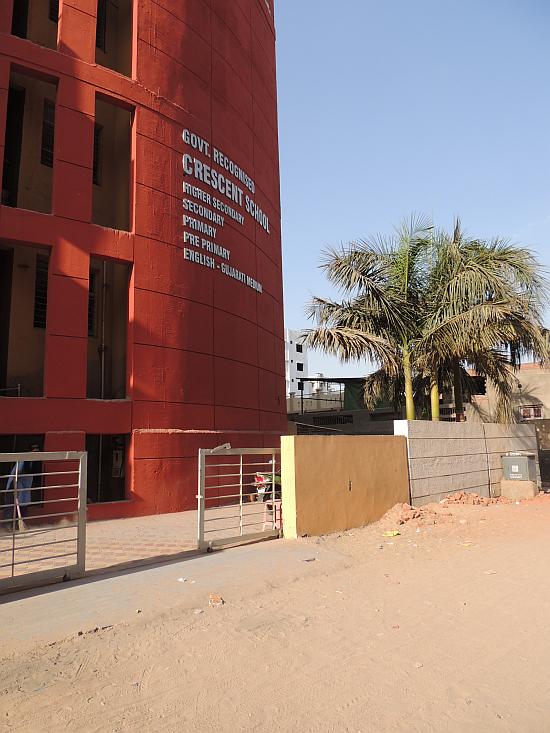 The Crescent School, perhaps the most highly regarded and respected school in Juhapura, is a mustard coloured multistory building tucked behind the Amber Tower and has been profiled in the Indian Express, CNN-IBN, and NDTV. Asif is equally likely to talk about what the school has as well as what it lacks.

“We pay the 30% water tax but yet we do not get any water. You can say this is wrong.” He pulls out his most recent tax bill: his common tax bill was Rs 63,019 of which 18,906 was for water. But the government did not charge for sewage, since there is no gutter line at his school.

He laughs. “So where is all the water going?”

This is a criticism he often hears: Juhapura residents do not pay taxes and that all the construction is illegal.

“Most of us pay taxes. And if the government made it easy for us to build here, we would. But look how difficult everything has become in Juhapura.” He says other areas of Ahmedabad also have high rates of illegal construction and yet the city is willing to turn a blind eye and provide civic amenities to them. Asif currently lives in one of the most posh housing societies in Juhapura with his parents, his wife, and his two young children and yet there is no paved road outside his house.

Can you think of a comparable upper middle class society in Ahmedabad that does not have a paved road?”

Part of what motivated Asif and his partners to start the school was that they saw the middle class getting squeezed out. NGOs will often provide assistance to the poorest residents in Juhapura and the rich will always find a way to succeed, Asif says.

.“Everyone forgets about the people in the middle.” 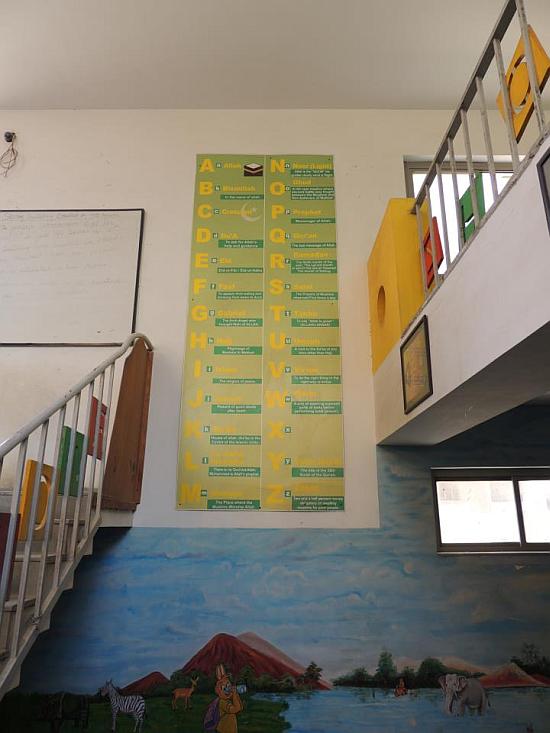 Asif takes me for a tour of his school, which features paintings of animals, a fish tank, sign boards with facts about science, pictures of musical instruments, and portraits of India’s leaders like Mahatma Gandhi, BR Ambedkar, and Abdul Kalam.

Asif stops at a large wall hanging that features each letter of the English alphabet where some letters, like “Z,” stand for Islamic words like “zakat” (charity).

“People take pictures of that and forget everything else about the school. I liked this because it is creative and because the students hear these words at home. Everywhere in India we see pictures of devotees but we do not make a big deal of it.”

There are no religious classes at his school but Asif does have a class on universal ethics. At his annual function recently, students danced in front of a large audience to the latest Bollywood dance numbers. For Asif the reason is simple.

“From the time children start to when they finish, we want to make them confident. This is why 78% of our children participate in these programs. We do not want to create one leader. We want them to all be leaders. This is why we put them all on stage from a young age.”

Still he knows the perception of Juhapura is that it is filled with madrasas.

“People who say this do not know about Juhapura or about madrasas,” he says.

According to his calculation, there are 24 primary schools in Juhapura, , six high schools, two higher secondary schools, and four madrasas. Each year there are 6,000 children in Juhapura who are ready to start school but only space for 2,000 children. Dropout rates are high too, he says.

There are other educational challenges in Juhapura. “There is no public library, no college, only one science school, no hostels for girls or boys, and when students finish school, it is difficult for them to get a job.”

The Crescent School charges 900 rupees each month per child and pays teachers above what they would receive in a government school. The school offers two mediums—Gujarati and English—and Asif tells me that these days English medium  is far more popular.

But he cautions people who think studying in English will guarantee success. “I tell parents that what will bring your child success is smart work and passion, not the medium.”

As we meet in his office, there is a flyer on his desk for a school in rural Gujarat that is celebrating a large contribution from an overseas Gujarati. Asif does not accept donations as he prefers self-reliance.

“No, we do not want to be turned into beggars. This is the problem—we all expect hand outs and we do not do things on our own.”

He fears Muslims are lagging behind and wants to push Muslims forward and make them aware. But this does not mean he talks to his students about the riots.

“This is the number one question journalists ask. But what kind of question is this? We are running a school. How is this part of the curriculum? We want to make the students feel good. They do not need to hear such things.”

After construction finishes on the the fourth floor, the Crescent School plans to expand to include up to the 12th standard and will cap enrollment at 1500 students.

Today Asif feels optimistic. He points out that of the 80 teachers, a few are Hindu from the neighbouring areas. He pulls me aside one day and tells me that he pays the Hindu teachers slightly more each month.

“They have to travel farther,” he tells me. “So it is only fair. But do not tell the other teachers.”

Recently Asif was approached by a few Hindu families from a neighbouring Hindu area who wanted to enrol their children in their school. He was so happy about this that he called me to his school on a Saturday afternoon, after school hours, just to tell me the news.

“It makes us feel good, that the divide is lessening.”

Asif already has his eyes set on his next project—a boys and girls hostel for Muslims. He has seen how difficult it is for Muslims to find housing in Gujarat and he wants to create a safe space for students in Gujarat.

“There is so much more we need to do to uplift ourselves,” he says. “But right now we need to concentrate on education. We have started running towards education but we are still far behind. We need to accelerate our speed.”