Empowering Story Of A Woman Who Followed Her Dream

From a homemaker to a ‘master trainer’; today she encourages dozens of women to adopt agroecological practices. 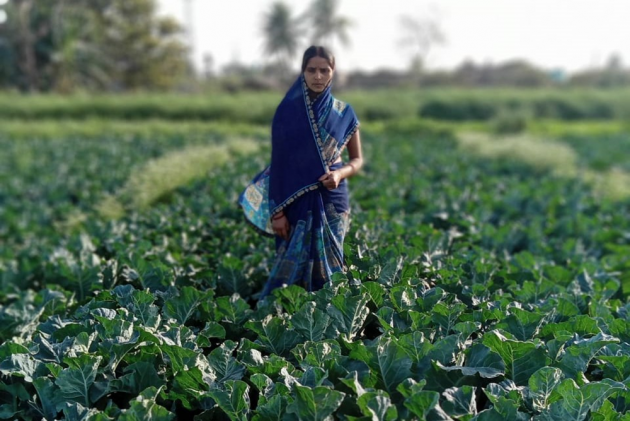 Woman farmer Manju Devi is from a simple family in a Bihar village. But she had a dream, which she achieved through hard work and grit.

From a homemaker to a ‘master trainer’; today she encourages dozens of women to adopt agroecological practices.

In four years, her landholding has increased from 4 to 10 kattha – growing vegetables, and an additional 2 kattha – producing paddy. Her annual profit is between Rs.60,000 and Rs.80,000.

Manju is from the Mudheri village of Haveli Kharagpur block in Munger district of Bihar. She has four children.

Her husband is a farmer and owns a small general store in the village. She was married off at an early age. However, she wanted to study and become a teacher.

After marriage, she was busy with her family chores – cooking, farming, animal rearing, and taking care of her children. There was no time for herself or for pursuing her dreams.

One day she heard a group outside her home discussing a project on socio-economic empowerment of women farmers implemented by Oxfam India in association with SEWA Bharat. It was on agriculture and new techniques in farming.

"I was in my house. Facing a dilemma in stepping out, I peeped out to see what the visitors were discussing with other community members," she says.

A woman member from the team introduced herself and called Manju outside. She joined the group and listened intently. It was about forming a women farmer's producer group. It will teach new agricultural practices to women farmers and train them in obtaining the best produce with limited resources.

It took some persuasion for her husband to allow her to join the group.

She grew tomato on about 4 kattha of land following the ‘raised bed nursery’ method and earned Rs.15,000 the same year.

This time, encouraged by her husband, Manju got involved with the farmer producer group and attended all meetings and skill development programmes on agriculture techniques.

She began motivating other women in her community and made several groups in her village.

She soon became a Community Mobiliser in Jeevika (State Rural Livelihood Mission) project in her village.

With a stable income, the family could now buy another piece of land for which she contributed Rs.50,000.

As the family’s fortune started turning, Manju got more involved in group projects, often travelling to other blocks, even districts.

In time, she became president of Karnbhoomi Farmer Producer Company. She advised farmers on seed selection, variety, etc. Her intervention helped community members purchase seeds at a better rate from dealers and vendors.

She still remembers the day she was supposed to visit Bangladesh for a project. Manju’s son called from the hostel and shared his friends’ admiration for her work.

“That day I felt that I have achieved something. I had become a role model! It was a memorable moment. They seemed so happy and that made me happy too,” she reminiscences.