The Indian policy has swung from one extreme to another — from supporting the pro-democracy forces led by Suu Kyi to the other extreme, alarmed by the Chinese inroads into Myanmar, of total support to the military Junta 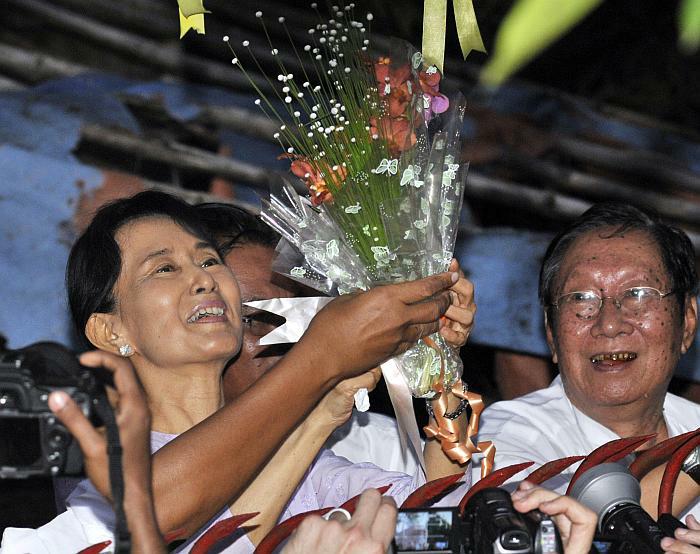 In her speeches, statements and interviews since her release from house arrest by the military Junta , Aung San Suu Kyi, the Myanmar pro-democracy leader, has already given some indication of her programme of action in the days and months to come—rejuvenation of the National League For Democracy (NLD), her party, unification of the opposition forces, a campaign for the release of political prisoners, a campaign against the fraudulent practices during the recent elections organized by the Junta, a non-violent struggle for achieving democracy without humiliating the Army and an initiative for national reconciliation.

Talking to a group of diplomats at Yangon on November 15, 2010, she is reported to have paid tributes to the countries that had steadfastly supported her and added that "she hoped that India would be more pro-active in future". She and her supporters in Myanmar and abroad attach considerable importance to India’s support to their struggle for the establishment of democracy in Myanmar. India’s support will have considerable moral weight. It is their expectation that despite the availability of Chinese support and assistance, the Junta will not like to deprive itself of Indian support since it would feel uncomfortable in the total embrace of China. It needs Indian support in order to avoid too close a dependence on China.

Those familiar with the ruthless manner in which the Myanmar Army crushed the insurgencies of the pro-Beijing Communist Party of Burma (White Flag) and pro-China ethnic minority groups such as the Kachin Independence Army (KIA) will know that though the Army has accepted considerable assistance from China, it will not like Myanmar to become a client-state of China. For this, it requires Indian support and assistance and Indian blessing for its rule. There is goodwill for India in sections of the Army even though it will be difficult to quantify it.

Will this enable India to play a pro-active role in supporting the pro-democracy movement in that country? If so, how should India play this role?

Unfortunately, the Indian policy in Myanmar has swung from one extreme to another. Initially, India supported the pro-democracy forces led by Aung San Suu Kyi. Subsequently, alarmed by the Chinese inroads into Myanmar, India swung to the other extreme of total support to the military Junta. This meant maintaining a silence on the Junta’s suppression of the pro-democracy forces and its arrest and detention of Suu Kyi and its machinations to ensure that she can never come to power.

We may claim that though we were silent in public, we were taking up these issues in private with the Junta, but the pro-democracy forces do not believe us. Even if it is true that we were taking up these issues discreetly with the Junta, it did not have any impact on the Junta. It chose to ignore our private soundings just as it ignored the public reprimands and pressure of the West.

The time has come for India to adopt a more nuanced political approach while continuing the present policy of economic support to the regime. The objective of the nuanced political approach should be to nudge the Junta to respond positively to Suu Kyi’s moves for a national reconciliation and enter into a dialogue with the pro-democracy forces. Another objective should be to persuade the pro-democracy forces to avoid a confrontational situation which could add to the fears of the Junta regarding internal security and stability. The Junta’s determination to maintain internal security and stability at any cost has to be understood by the pro-democracy forces. Any confrontational situation could lead to further suppression by the Junta and fresh restrictions on her and even her re-arrest. This will not be desirable.

There is a need for Aung San Suu Kyi to rid herself of the image that she is an icon of the West and not of the developing world. Her reliance on Western support to project her cause adds to the nervousness and fears of the Junta. It is important for her to distance herself from the Western elements, which flock to her cause, and to move closer to the developing world. Without the support of the developing world, her pro-democracy movement will remain weak. She should interact more intensely with the developing world and persuade the West to tone down its unrelenting demonisation of the Junta and gradually relax the economic sanctions. She should appeal to the West for the immediate lifting of all sanctions which tend to affect the economy and the common people. She should also appeal for lifting the travel restrictions on the members of the Junta. Such gestures by her could facilitate the reconciliation process desired by her.

Aung San Suu Kyi has told the BBC in an interview that she did not want the Junta to fall but to change and serve the country better.

She also said she hoped for a non-violent end to military rule. That is the right approach. This should be combined with gestures such as those mentioned above to convince the Junta of her goodwill. The Army has always been a part of the political life in Myanmar. It cannot be ended in the near and medium term future. It can be diluted and re-shaped. That should be her objective.