England came away from their tour of India empty-handed, losing series in all three formats, but Jos Buttler remained positive. 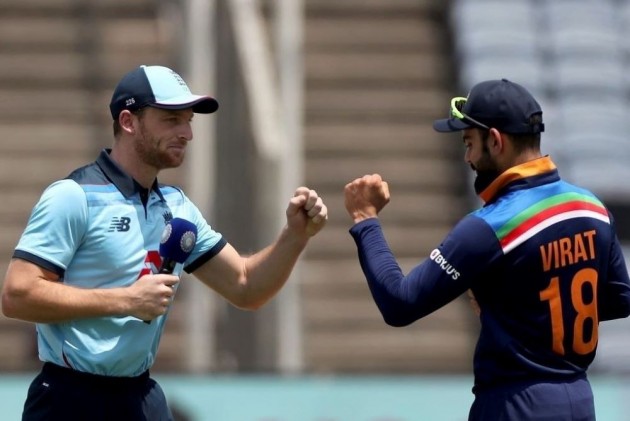 England won the Test opener but went down 3-1 over four matches, while they twice led a five-match T20 series before a 3-2 loss.

The tourists were always chasing in the ODIs, both across the series – after India's opening win – and in all three matches, as they bowled first on each occasion.

Jonny Bairstow and Ben Stokes led a superb victory in the second ODI, but Sunday's decider saw India edge to a seven-run victory despite the best efforts of Sam Curran, who equalled the highest score for a batsman coming in at eight in an ODI with an unbeaten 95.

Defeat meant England have still only won one multi-game bilateral ODI series in India, losing the past six in a row.

The world champions have also been beaten in back-to-back series for the first time since a run of three in 2014 (two against Sri Lanka and one versus India).

But stand-in captain Buttler, who was defeated for just the third time as skipper in ODIs, maintained a positive outlook going forward.

"We've been a brilliant side for a long period of time now," he said. "I think we lost those two series [the T20s and ODIs], but that's two losses in our last 11 series.

"So, we're still a very good side, expanding that talent pool. There's been a few guys obviously missing from this side and guys coming in to have opportunities, which is fantastic.

A fantastic tour full of world-class and exciting cricket

See you in our summer! pic.twitter.com/UDvYqaoQwS

"And that's been a big part of us getting better and better as a side. We never want to put limitations on what we're capable of. We'll continue to try to push the boundaries and strive to do that.

"And I think the exposure of players coming in and continuing to play in that fashion that we expect is great.

"Expanding that talent pool and pushing each other from within and building the strength in the squad, and the competition for places in the XI, is only going to continue to improve our side.

"So of course, it's again a long cycle looking ahead to a World Cup, but we always want to learn, and you want to win at the same time. We're of course disappointed when we don't do that.

"But of course, there are big pictures moving forward and we'll continue to be a very good side.

"There's more and more experience in guys, a lot of guys, in and around 100 caps as well. So, the experience in the squad is huge, and the exposure for other guys coming in is vital as well.

"I think we're in a really good place as a side."

#INDvENG Player of the Series

England have a packed schedule this year before heading back to India in October for the World Twenty20, a tournament in which they were beaten in the final in dramatic fashion five years ago.

Buttler added: "We came here wanting to win. We play the game to win matches and to win series.

"And in the must-win games at the end of these T20 or one-dayers, we haven't quite managed to do that. So of course, we were disappointed with that.

"But there'll be some great learnings taken from the tour, some great exposure to players playing in this part of the world for the first time.

"I think once again expanding the talent pool available to us in one-day cricket, building ahead to the T20 World Cup in a few months' time and of course the 2023 World Cup later on down the line here as well.

"So, any time we expand that player pool, that creates competition, that creates better performance and that's the upward trajectory that we're always after as a side, that continuous improvement."