5 Iconic Comedy Shows To Watch This Weekend On OTT Platforms

After the absorbing weekdays, it is a perfect time to feast your eyes with some of the best rated comedy series available on the OTT platforms. Here is a sorted list to get started! 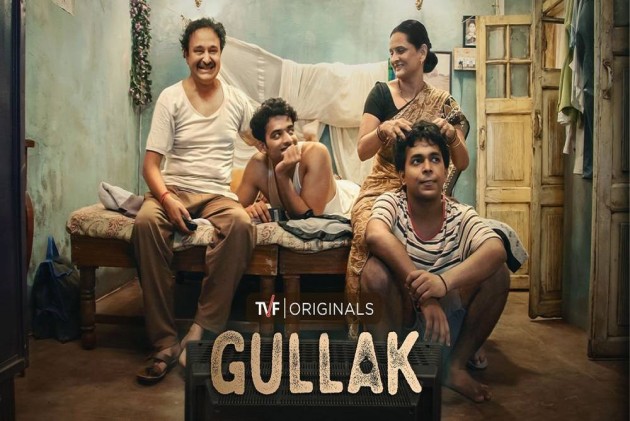 The blooming and capricious industry of entertainment showcases thousands of web series and movies. With so many popular online streaming platforms serving a miscellaneous collection of genres, it is an exhausting task to choose shows with good ratings. Hence, we’ve a sorted list to ease your selection tizzy!

The Viral Fever’s (TVF) web series – Gullak offers a gentle humour with a thought-provoking plot streaming on Sony LIV. It is directed by Amrit Raj Gupta and unfolds the life of a bickering family living in a small town in North India. Gullak is a series of anecdotes showcasing the real struggles of the middle class families. It revolves around the life of Mishras – An emotional yet strong mother, a cool-headed dad who is an employee at an electricity division, older son who is jobless and currently preparing for exams and a younger mischievous school going son. The opening scene depicts an ongoing debate on whether the house needs renovation or not. They quarrel, they yell, they face hardships but Mishras have an unshakable foundation. It is an extraordinary tale of the ordinary middle class Indian families. From one liner witty dialogues to cherishable moments of life – Gullak is a promising web series focusing on weighing issues like financial crisis faced by families and how they collect penny by penny in the life’s gullak with souvenirs of happiness.

Don't we all love it when a series ends with a question? Yes, Pushpavalli will be premiering its third season in 2021 and I bet you'll be waiting for it just as we are!

Sumukhi Suresh’s character Pushpavalli emerged as a winner breaking the wall of stereotypical Indian female leads. This enthralling comedy drama series is an original series of Amazon Prime, from which you can't turn your heads away. The series revolves around Pushpavalli, the main protagonist who is an obsessive stalker and her sole aim is to date Nikhil, who doesn't even know she exists until she changes cities for him and lands in Nikhil's hometown, Bangalore. Pushpavalli is a compulsive liar who hid her flaws with  sharp wit. Her life's a mess – No career plans, constant pressure from her mother to get married and obesity concerns. However, everything changes when she meets Nikhil and her aim becomes chasing Nikhil. Will she confront her love to Nikhil? Or marry Vidyut, her mother's choice? Will she start afresh? For all these answers, you'll have to binge watch this dark humour series.

This is a cult classic Indian sitcom which is currently streaming on Disney+Hotstar. Written by Aatish Kapadia, Sarabhai vs Sarabhai is widely acclaimed as the greatest Indian comedy shows of all time.

The plot unfolds story of an upper-class Gujrati family – The Sarabhais who accommodates a luxurious life as in South Mumbai. Their family consists of Indravan Sarabhai and his wife Maya, who lives in an apartment with their unmarried son, Rosesh. The older son Sahil lives with his middle-class wife Manisha across the hallways.

The ingenious scripting and perfect comic timing adds emotional depth to the show. For instance, Rosesh’s funny poetry criticized by his father and the hypocrite mother-in-law who constantly snobs her daughter-in-law for belonging to a middle-class family. The crooked twists and turns will hook you to the screen for hours.

Ten seasons – six epic characters – 236 episodes and 26 years, F.R.I.E.N.D.S. is a forever hit romantic comedy sitcom. The show grabbed a decent rank in the list of 50 greatest TV shows of all time. At present, it is streaming on Netflix and is firmly holding the rank of top 10 shows watched in India. The plot-driven script, convincing characters, humorous dialogues finds a place in everyone’s hearts. It is an evergreen show that portrays friendship, love, sarcasm in a single frame. This light-hearted sitcom is a stress buster which conveys the message about loyalty in friendship. Joey, Monica, Rachel, Ross, Chandler, phoebe, each character ingrains a distinct quality, but one thing which is common is ‘valuing friendship.’ So, in the world full of scams, find someone whom you can call a real gem (off course just like friends)

Sometimes it's good to blow away the cobwebs of misery and relive small moments of life. Schitts Creek is a light-hearted sitcom with 6 seasons (making it perfect for binge watching weekend). The mismatched yet perfect group everyone wishes for- Schitts Creek revolves around the lives of filthy-rich Ross family who suddenly becomes bankrupt and go to a ramshackle motel in a town they once bought as a joke. The characters chemistry or the seamless dialogue delivery holds you till the last of every episode. All the 6 seasons are available on Netflix.

This sitcom may not be trending right now but it is a legendary show where you literally sit back and enjoy watching it with a bowl of popcorns.