7 Most Powerful Woman Characters On OTT In 2021

From Raveena Tandon as a strong determined female cop from a small town in ‘Aranyak’ to Sushmita Sen’s outstanding portrayal in ‘Aarya 2’, here’s a look at 7 of the most power woman characters on OTT this year. 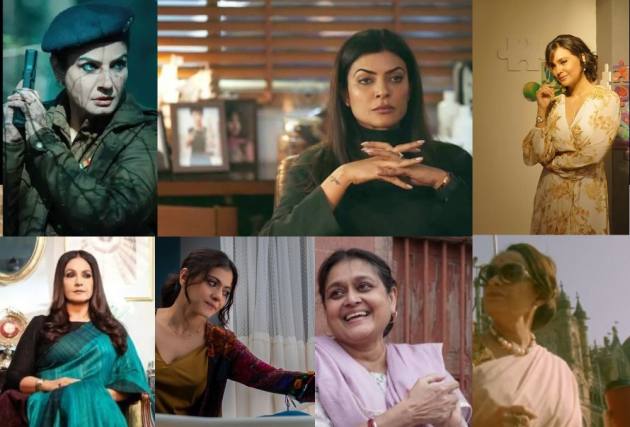 Time has changed and the audience's love for their favourite actors does not revolve around the age of the character they play but around how they play it and the impact of their performance. There is a paradigm shift towards playing age-appropriate roles, especially female actors, which is being accepted with grace by them and the audiences of streaming services.

From Raveena Tandon as a strong determined female cop from a small town in ‘Aranyak’ to Sushmita Sen’s outstanding portrayal in ‘Aarya 2’, here’s a look at 7 of the most power woman characters on OTT this year.

Pooja Bhatt came back on screen with 'Bombay Begums' as Rani, the CEO of a top bank in Mumbai. Chasing her way to the top, Rani faced many hurdles that made her who she is today. Pooja’s role was not just appreciated by critics but the audience who related with the kind of challenges she displayed with much ease, making this a very relatable central character.

Unlike ever seen before, Raveena Tandon made her digital debut with Netflix with 'Aranyak', a murder mystery set in some of the most picturesque locations in India leaving us with questions at the end of every episode. Raveena was not only called out for her great performance as a cop but also the display of her maternal instincts and the wife of any Indian household who juggles multiple things simultaneously

Soni Razdan came to Netflix with not just one, but two projects in 2021. Starting off with the sensitive mother who always looks out for her family in 2021 to the well experienced agent in 'Call My Agent: Bollywood' who everyone goes to for advice and eventually solves the crisis!

Apart from these we also saw the evergreen Kajol entertaining you with 'Tribhanga' where she broke the character of a stereotypical mother in Indian cinema with her genre-breaking performance.

With her recently released film 'Bell Bottom', the actress has dared to do what few actors have ventured into. She plays a woman much older than she is in real life with much grace. Lara Dutta's portrayal of late Indira Gandhi in the film won her acclaim from audiences all over the world.

Sushmita Sen bought her power packed performance in the crime thriller 'Arya 2' and charmed the audience with her Bawse-ness while essaying the role of Aarya Sareen.

2021 was the year with power packed performances from veteran actress Supriya Pathak. With her stellar and diverse performances in 'Mimi', 'Rashmi Rocket', 'Toofan' and 'The Big Bull', the actress amassed praises throught the year.