Aayush Sharma On Fighting With Salman Khan In 'Antim': I Got Palpitations

The actor was speaking at the launch of the second track 'Bhai Ka Birthday' from their film 'Antim: The Final Truth'. 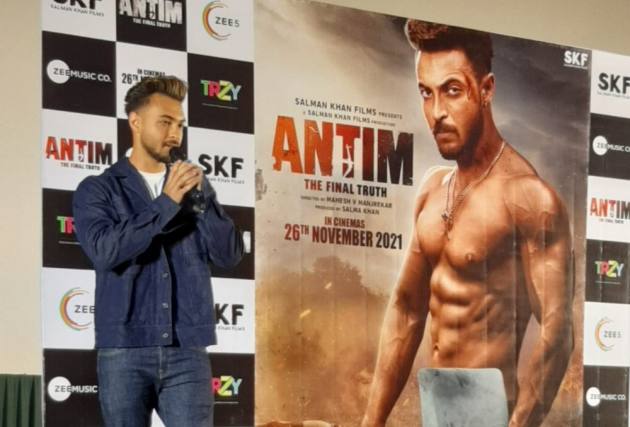 Actor Aayush Sharma attended an event on Monday in the country's biggest single screen theatre Raj Mandir in Jaipur. The event was held to launch the second track of his upcoming film 'Antim: The Final Truth', which stars superstar Salman Khan in the lead.

The track,'Bhai Ka Birthday' has been composed by Hitesh Modak and sung by Sajid Khan.

In the movie, Khan and Sharma's characters are seen at loggerheads as the former plays a brave police officer and the other one is seen as a goon gaining power. While there are plenty of action sequences in the film, Sharma revealed how it felt to fight with 'Bhai' Salman Khan.

(He is very sweet in real life but when you see him on a film set, that’s when you realise that you are standing in front of Salman Khan and you have to punch him. I started getting palpitations).

The actor also interacted with fans who will be celebrating their birthday in the month of November and got pictures clicked with them.

Directed by Mahesh Manjarekar, 'Antim: The Final Truth', also stars Mahima Makwana. The film is produced by Salma Khan and presented by Salman Khan Films and will release on November 26.