Abhishek Bachchan and Vivek Oberoi crossed paths at a recent event where Badminton Champion PV Sindhu was being honoured. The two actors did the unthinkable as they hugged each other at the red carpet. 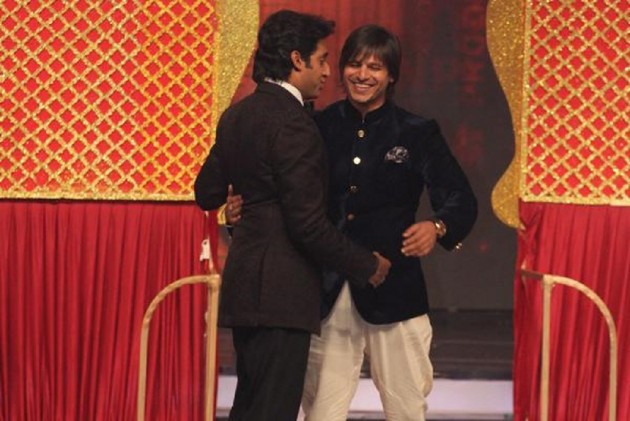 Often Bollywood stars who might have had some sour history with each other cross paths at public events. At times, they might not acknowledge each other but in Vivek Oberoi and Abhishek Bachchan’s case, that doesn’t seem to be the scenario. At a recent event where World Badminton Championship gold medalist, PV Sindhu was being felicitated, Amitabh Bachchan was present with Abhishek Bachchan. At the same ceremony, Suresh Oberoi and actor Vivek Oberoi also was there with his wife, Priyanka Oberoi.

At the red carpet, Abhishek and Vivek crossed each other’s paths and displayed a sense of maturity as they smiled at each other and then hugged it out. The two actors exchanged a few words and later Abhishek also hugged Vivek’s father Suresh Oberoi. It surely seemed that Abhishek and Vivek let bygones be bygones and decided to hug it out. Abhishek even met Priyanka Oberoi as he walked further. The Manmarziyaan actor was all smiles he met the Oberoi family with Big B.

A few months back, Vivek had attracted a lot of negative attention after he shared a meme related to Aishwarya Rai Bachchan, Abhishek Bachchan and Salman Khan. Post that, Vivek received massive backlash on social media for the joke and later he deleted the post. The actor had even apologised for the same on Twitter. Back in the days, Vivek was dating his Kyun Ho Geya Na co-star Aishwarya Rai but things didn’t work out. Years later, Aishwarya and Abhishek fell in love and got hitched in a lavish wedding in Mumbai.