Actor Vishak Nair got engaged to Jayapriya Nair and he introduced his ladylove officially on social media. 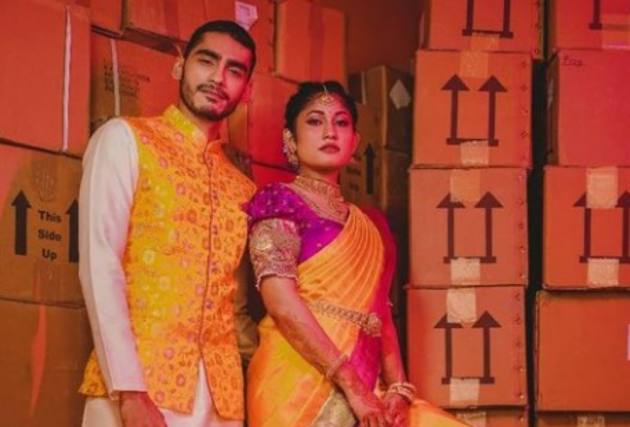 Vishak Nair, a Malayalam actor, recently got engaged to his ladylove Jayapria Nair. According to reports, the couple became involved in traditional Hindu traditions. Vishak wore a cream Kurta pyjama with a yellow waistcoat, which matched his fiancee's pattu yellow saree.

Vishak Nair and Jayapria Nair also hosted a party, which was well attended by friends and family. They dressed the party in classic black and let the mood take over. The party was attended by Anna Ben and others. In matching black outfits, the couple looked stunning.

Vishak Nair shared multiple happy snippets of them dancing. The couple celebrated the joyous occasion with the company of their friends and food.

On October 21, the fifth anniversary of his film 'Aanandam', Vishak Nair officially announced his relationship with Janapriya Nair. He made it official with a cute photo and a note of love introducing his lady love, Jayapria Nair. Vishak Nair shared a series of them in black and white, writing,  "But then I met the young lady in the pictures above and just like that...those fears dissipated and I was able to see the pot of gold at the end of the rainbow. For I had found what I didn't even know I was looking for...the missing piece of the puzzle. So it's with a heart full of hope, joy, excitement and everything in between that I introduce to you my soon to be fiance Ms. Jayapria Nair (sic)."