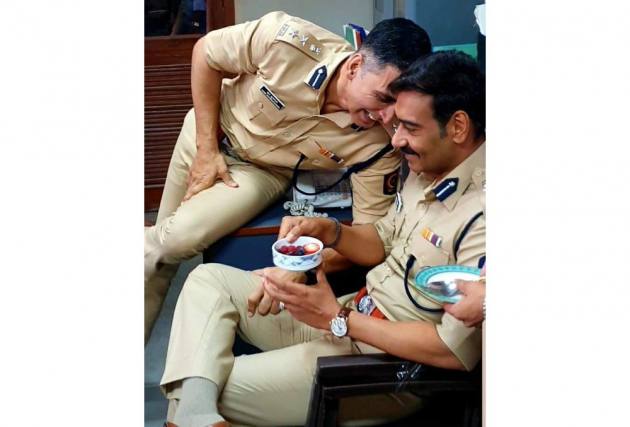 Actor Ajay Devgn completed 30 years in the Hindi film industry on Monday (November 22). With films like 'Singham', 'Drishyam', 'Dilwale', and others, he has managed to win the hearts of millions. The actor's debut film 'Phool Aur Kante', co-starring actress Madhoo was a hit amongst movie goers. It was directed by  Kuku Kohli.

Fans have been heaping love and appreciation on the actor for accomplishing this milestone on this particular day. Akshay Kumar even sent Devgn his heartfelt congratulations.

Devgn's wife, Kajol wrote a heartfelt note for him on completing this milestone.

Kumar was appointed to the position and reflected on their days as 'newbies' with Devgn. He recalled how he and Ajay had trained in martial arts alongside Devgn's father Veeru Devgan, an action choreographer. The Ram Setu star wished Ajay and penned a letter to him.

“Thanks Akki, we’ve shared a long innings. And, I’m happy & grateful for your presence alongside" commented Devgn.

Several others took to social media as well to congratulate the actor on the achievement. One of them being Amitabh Bachchan. Bachchan took to Twitter to express himself and congratulate Devgn on the feat.

T 4103 - #AjayDevgn , completes 30 years in the Film Industry , on 22nd Nov , when his film 'Phool aur Kante' released. Soft spoken, non interfering, yet filled with passion. My congratulations Ajay, may you continue for another 70. âÂÂÂÂÂ¤ï¸ÂÂÂÂÂâÂÂÂÂÂ¤ï¸ÂÂÂÂÂðÂÂÂÂÂÂÂÂÂÂ¹ðÂÂÂÂÂÂÂÂÂÂ¹

Congratulations @ajaydevgn sir for completing 30 years in the film industry. Your dedication and passion towards cinema are unmatchable. Wishing you many more successes in the years to come..:)

It was a pleasure to be associated with you for #Makkhi and to have you in #RRRMovie. pic.twitter.com/G34H8wf3Uy

Was there to wish you on your premiere night…saw your close up and your eyes as soon as I entered the auditorium and I just knew he’s a star ðÂÂÂÂÂÂ congratulations on 30 years @ajaydevgn https://t.co/Hz1MvtjEU3

Congratulations on completing
30 fantastic years in our film industry.
I am so glad i have had the absolute pleasure of working with you @madhoo69
& working with you AJ @ajaydevgn
in more than 7 films together & now back with you in #Rudra .
To many many more glorious years ! pic.twitter.com/ahWSGrLw96