Alia posts Preamble On Insta As Solidarity Towards Students

After Sonakshi Sinha and Ishan Khatter, Alia Bhatt became the latest Bollywood star to post a picture of the Preamble to the Constitution of India, as a mark of solidarity 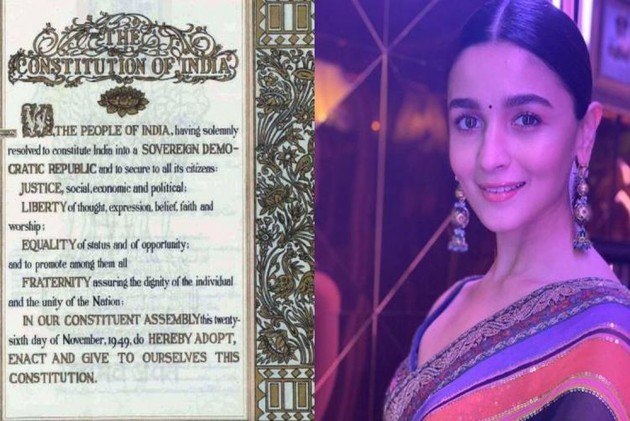 After Sonakshi Sinha and Ishan Khatter, Alia Bhatt became the latest Bollywood star to post a picture of the Preamble to the Constitution of India, as a mark of solidarity towards nationwide students protesting against the Citizenship Amendment Act (CAA).

Alia posted a photo of the Preamble on Instagram with a caption that went: "Learn from the students."

Earlier, Sonakshi took to Twitter to upload a picture of the Preamble with the message: "This is what we were, what we are and what we MUST remain! #neverforget."

Ishaan also posted a photo of the Preamble. He wrote: "I was raised to believe in and take pride in the fact that we are the greatest secular nation in the world. I want it to remain that way. I stand by anybody who exercises their rights peacefully and I pray for the unison and well being of all my fellow people."