Angelina Jolie also briefly made an appearance at the White House press briefing room as she spoke with reporters about the need for the reauthorization of the legislation. 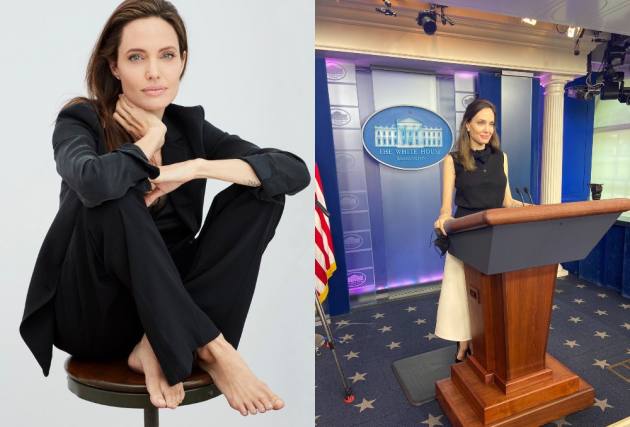 Hollywood star Angelina Jolie visited the White House in Washington DC  to meet officials to discuss reauthorizing the Violence Against Women Act on Wednesday. She was later spotted at the Capitol Hill where she met US gymnasts who were testifying to discuss the improper investigation in the Larry Nassar case.

The Oscar award-winning actress also briefly made an appearance at the White House press briefing room as she spoke with reporters about the need for the reauthorization of the legislation.

“I feel like I walked into a press conference. I've had good bipartisan meetings, so that's encouraging. It feels just like it should feel, feels very serious,” she told the reporters.

Jolie rep informed that the actress was to have a discussion with Senate and Department of Justice officials, regarding the rights of women and children and health in families.

"UNHCR Special Envoy is in D.C. for a second day meeting with senior White House and Department of Justice officials, and senators to continue to advocate for the rights of women and children and health in families. In her meetings, she will talk about the importance of VAWA reauthorization, FBI reforms, judicial training, and health equity including non-biased forensic evidence collection", Jolie’s spokesperson said in a statement.

Jolie also met with White House press secretary Jen Psaki, who tweeted about their meeting and called the actress "tireless and committed" when it comes to advocating for the rights of women and children. Psaki mentioned how Angelina discussed the importance of the renewal of the Violence Against Women Act during their brief meet.