On Tuesday, Ankita Lokhande released a slew of photos from her lavish wedding to Vicky Jain. 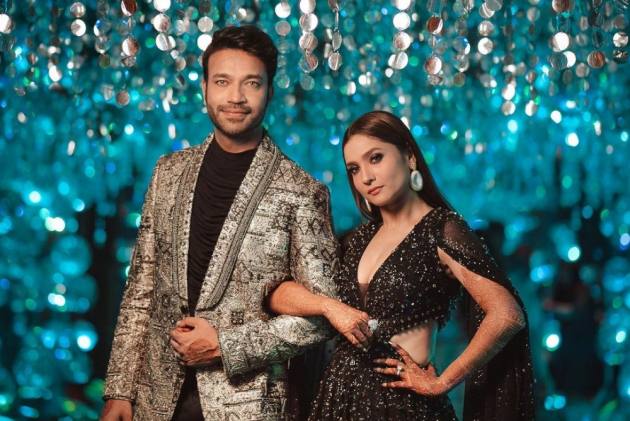 On Tuesday, Ankita Lokhande and Vicky Jain married. The couple married in an extravagant wedding ceremony, which was followed by a banquet.

Lokhande announced her marriage on Instagram by sharing several stunning pictures from the wedding. She wrote, "Love is patient but we’re not. Surprise! We’re now officially Mr and Mrs Jain!"

Lokhande came down the aisle wearing a golden Manish Malhotra lehenga and a lengthy veil. Vicky Jain matched her in a white and gold sherwani. The photographs capture the couple's intimate moments as they do pheras in a temple-like mandap.

Lokhande wore a red saree with heavy jewellery to the post-wedding reception, while Vicky wore a black sherwani. The bride and groom interact with the guests at the wedding reception.

It was a star-studded celebration, with some of Lokhande's television colleagues and friends in attendance. Mrunal Thakur, Shraddha Arya, Arti Singh, Srishty Rode, Asha Negi, Eijaz Khan, and Pavitra Punia were among those who attended the wedding at the Grand Hyatt in Mumbai.

Jain had come to the event in the evening with the band baaja baaraat. As the baaraat proceeded ahead, he was in a vintage automobile. As part of the groom's brigade, the guys donned flowered blue turbans.

The wedding celebrations began on Saturday with a formal mehendi ceremony, followed by haldi, cocktail, and sangeet. Lokhande and Jain have been together for almost three years.

On Monday, Lokhande's Manikarnika co-star Kangana Ranaut also joined her at the sangeet. She was in a purple lehenga and shared quite a few pictures on her Instagram Stories from her ‘yaar ki shaadi’. The actor also mentioned Lokhande's ‘planet-sized ring’.