Baahubali - The Beginning, the only non-English film was screened at the Royal Albert Hall in London ever since its inauguration 148 years ago. Yes, the Baahubali team witnessed a proud moment as they received a standing ovation post the screening. 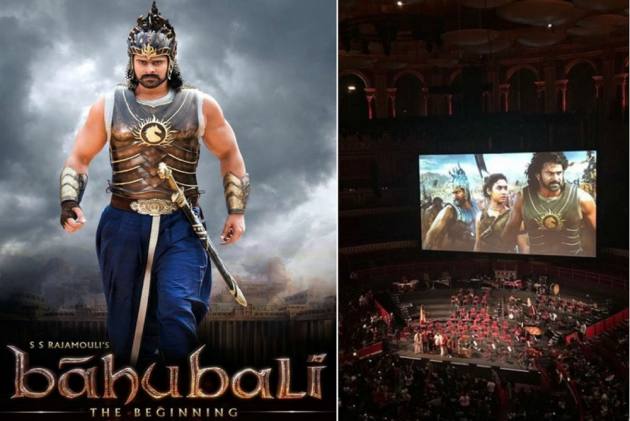 Director SS Rajamouli has put Indian and regional cinema to the global level with India's biggest box office smash-hit Baahubali – The Beginning and Baahubali: The Conclusion. The Baahubali team, including actors Prabhas, Anushka Shetty, Rana Daggubati and director SS Rajamouli united in London for a grand event. Baahubali - The Beginning, the only non-English film was screened at the Royal Albert Hall in London ever since its inauguration 148 years ago. Yes, the Baahubali team witnessed a proud moment as they received a standing ovation post the film's screening.

The official Baahubali Twitter shared a video of Prabhas, Anushka Shetty and others witnessing the huge moment. The tweet read, “Standing ovation at the @RoyalAlbertHall HUGE applause to whoever came to #ReliveTheEpic.. Thank you LONDON... We will cherish this event forever...Saahore @MMKeeravaani..& the entire team of BAAHUBALI...” Before the event, Rana Daggubati, Prabhas received a grand welcome from their international fans who patiently waited for their arrival outside the hotel. Check out the videos and photos as the audience relived the epic and historical film of Indian Cinema.

The biggest film of the Indian Cinema, Baahubali: The Beginning was screened at the prestigious Royal Albert Theatre in London on October 19. Composer MM Keeravani's background score was also performed by the Royal Philarmonic Orchestra.