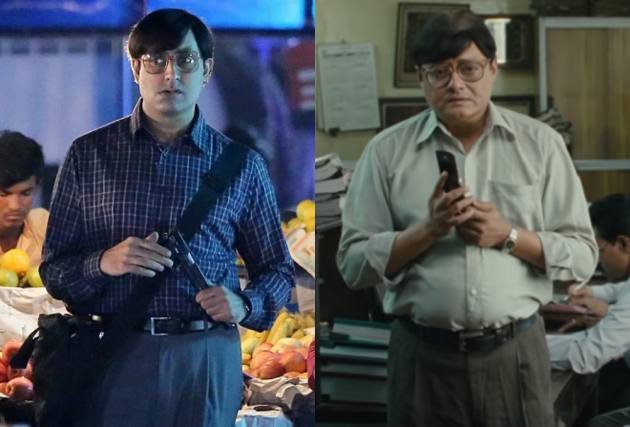 This is probably the blandest of phrases that people from all over the country keep saying throughout the day quite a number of times. Whether you’re a Hindi speaker, a Bengali speaker, Tamil speaker or any of the numerous Indian languages, you would be uttering this phrase innocuously several times in a day. It could be for the most simplest of things – asking people for directions on the road, your wife asks you for a glass of water, your mom calls you up from work to have dinner, you call up someone and their assistant picks up and asks you to wait, and so many million other things, which you must be replying to or getting replied with this ‘Ek Minit…’.

However, when Saswata Chatterjee entered the hearts of Hindi-speaking audiences as ‘Bob Biswas’ in ‘Kahaani’, this term suddenly got a new identity – something that was spine-chilling. Hiding behind prosthetics and heavy glasses, mumbling in a Bengali-accented Hindi, pulling out a revolver from a simple sling bag – Chatterjee just made this character come from the films to our real lives. It is probably one of the very few fictional characters from Indian movies which have gone ahead to attain cult status – and he didn’t even have to be a superhero to do it!

The character went on to become so massively popular that despite the presence of stellar actors like Vidya Balan, Nawazuddin Siddiqui, Parambrata Chatterjee in ‘Kahaani’s lead cast, it is Saswata Chatterjee’s portrayal of ‘Bob Biswas’ which gave birth to a spin-off just for that character. The solo film, which releases tomorrow on Zee5 will be headlined by Abhishek Bachchan playing ‘Bob Biswas’ with actors like Chitrangda Singh, Tina Desai and many others being a part of the film.

So Who Was ‘Bob Biswas’?

‘Bob Biswas’ was the source of our nightmares. While he used to be the usual mundane insurance agent in the day, but during the nights, he was a ruthless contract killer, a murderer who was constantly lurking behind the garb of a regular day-to-day guy on the street. He is presented to the audience as a middle-aged man who not only has a quiet demeanour but also isn't especially effective as an insurance agent. Whenever we get to see him in his office, we see that he is either being yelled at or being punished for being on the phone by his boss. Behind that unflinching man, when his flip phone pings, he turns himself into something which we couldn’t imagine at the very first outset. A message which contains an image, but as an audience, we have no idea what it implies, and why it was sent to a boring insurance agent like ‘Bob Biswas’.

‘Bob Biswas’ shoots Agnes D'mello first and that’s when the audiences who were probably turning away from him are hooked back to the screens thinking ‘OMG what did I just miss!’ It was Agnes D’mello who would have probably led Vidya Balan’s character Vidya Bagchi to Milan Damji, whom she was searching throughout the film. ‘Bob Biswas’ rings her doorbell, confirms Agnes D’mello’s identity and then shoots her at point-blank range. He isn't one of those 'cool' assassins which we have all seen a million times in Hollywood and even in Bollywood movies. The ones who dress in all-blacks, carry sniper rifles on their shoulders and have a small pistol hidden in their socks, and can shoot anyone from a couple of rooftops away and also walk away from the crime scene making everyone in the audience believe it’s just so slick and uber cool. ‘Bob Biswas’ is completely opposite to this. He is a man with a belly and wears some of the most uncool clothes. He is someone who gets exhausted and tired when he runs too fast, probably behind the person he is about to kill. He needs to halt to catch his breath, making him the type of assassin who can get away with murder by just getting mixed up in the crowds.

How can you forget the most terrifying scenes of ‘Kahaani’ where ‘Bob Biswas’ pushes and pulls back a pregnant Vidya Bagchi, in front of an incoming metro train? The scene is so horrifying that even to date I don’t feel like standing close to the edge of the metro platforms whenever I am in Kolkata. To add to what ‘Bob Biswas’ does to Vidya Bagchi, he manages to keep a horrific smile on his face while Vidya Bagchi is in utter shock, howling and screaming from the inside for her life. He pursues her all through the metro station and eventually tells her to return to London and forget about the entire case of her missing husband.

‘Bob Biswas’s tale in ‘Kahaani’ concludes with the insinuation that he was killed in a road accident. While running after Vidya Bagchi to assassinate her it is seen that he is struck by a vehicle on the road. However, we don't see the death of ‘Bob Biswas’.

It could be that the new Abhishek Bachchan-starrer picks up after that road accident. We see in the trailer that 8-years have passed by and all this while ‘Bob Biswas’ was in a coma, and finally he is back to health, but he doesn’t remember anything of his past life. It’s unsure, however, that whether the makers of the film have decided to interlink it that way to 'Kahaani' or is it a completely new story. This connection has to be seen to be believed.