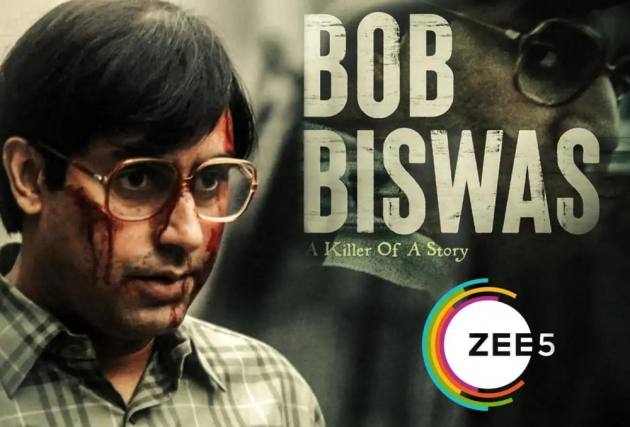 ‘Bob Biswas’ is set prior to the events of ‘Kahaani’, with actor Abhishek Bachchan stepping into the role's full-fledged extension. He is seen coming out from an eight-year coma with no memories of his past life, the family imposed upon him, or the shady figures hounding him to remind him of his deadly past. The plot centres around ‘Bob Biswas’, a regular insurance agent. While he shares a home with his wife and children, one day, two mysterious individuals visit him and inform him that he must return to work as a hitman. What happens to his life after that? Does he remember his past? Does he manage to become the cold-blooded assassin whom we saw in ‘Kahaani’? Well, that’s what the film is all about.

Chitrangda Singh as ‘Bob Biswas’s wife steals the show. Obviously, she has a lesser screen space than the protagonist of the film, but she manages to win your heart with her simplicity and oozing sensuality. The entire supporting cast is exceptionally good. Leading from the front is Paran Bandopadhyay, who just steals the scenes whenever he is onscreen. Samara Tijori, Ronith Arora and Tina Desai are also decent in their parts. Coming to Abhishek Bachchan as ‘Bob Biswas’, this is without a doubt one of his top three best performances in his career. He isn’t trying to recreate what Saswata Chatterjee did in ‘Kahaani’, but has managed to build the character from ground zero. He is a much more subdued version of what the character was in ‘Kahaani’. Possibly what happens to ‘Bob Biswas’ at the end of this film makes him the unflinching and unhinged contract killer which was shown in ‘Kahaani’. Overall, Bachchan did a great job.

Diya Annapurna Ghosh is good as a debutante director. There are some scenes directed with such conviction that a usual newbie director wouldn’t have had taken that route. Nevertheless, Ghosh has a long way to go.

While the direction is good, the story by Sujoy Ghosh could have been way better. There are certain instances where you’re left questioning as to why this was shown. (Spoilers Ahead) For instance, the backstory of why ‘Bob Biswas’ went into a coma for 8 years, or why was Chitrangda Singh’s first husband killed, how did she end up getting hitched to ‘Bob Biswas’, or the entire ‘Blue’ drugs angle – none of it got a logical ending.

The cinematography by Gairik Sarkar could have showcased the locales of Kolkata a bit better. Some more scenes could have been shot just probably as an interlude to showcase that the entire thing was happening in Kolkata. Also, I did miss the iconic metro platform scene of ‘Kahaani’ with ‘Bob Biswas’ and Vidya Balan. I wish some scene could have been shot in a similar location, just to give the audience a similar chill down the spine.

The editing by Yasha Ramchandani could have been a bit taut towards the middle of the movie where it slightly lags, and you’re just feeling like checking out your messages on your phone – not a good sign for a mystery thriller.

The music and background score by Clinton Cerejo, Bianca Gomes, Vishal–Shekhar and Anupam Roy doesn’t create that impact. For instance, even to date, people recall Amitabh Bachchan’s deep baritone voice singing the Rabindra Sangeet, ‘Ekla Chalo Re’ in ‘Kahaani’. That impact of the music and background score is absolutely missing in ‘Bob Biswas’. None of the songs are that memorable to keep you hooked.

Lastly, the film suffers because the character of ‘Bob Biswas’ played by Saswata Chatterjee for probably 8-9 minutes in ‘Kahaani’ is too iconic that you can’t let go of the comparisons. While Abhishek Bachchan has done a phenomenal job, as an audience you keep on missing that vicious look of a dreaded assassin, which was brought out so fantastically by Saswata Chatterjee. Abhishek Bachchan manages to get that deadliness out once when he kills a rabbit with his bare hands, but this sudden spurt just vanishes in thin air pretty soon.

To sum it all up, ‘Bob Biswas’ is engaging with some great performances. However, it’s not as taut, as mysterious and as thrilling in the end as ‘Kahaani’ was. It’s indeed a ONE-TIME WATCH. I am going with 2.5 stars.