Not just ‘Prithviraj’, there are numerous other upcoming projects which delve into the varied Indian mythological characters. Also, quite a few period dramas are also being made. 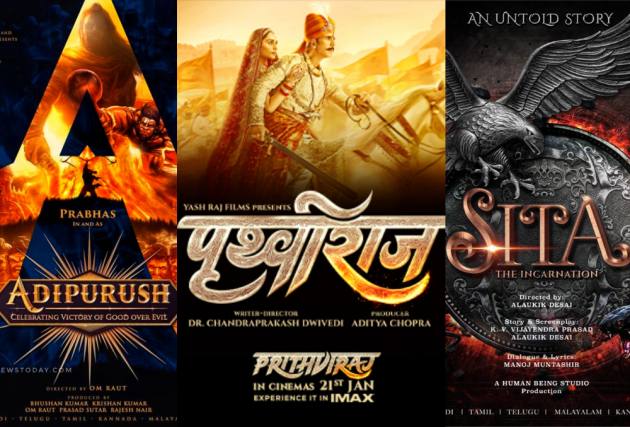 There are phases in Bollywood’s history when the industry suddenly gets obsessed with a certain idea and filmmakers then go ahead to keep churning out films back-to-back on that topic. Just in these last 21 years of this century, it has happened with the Bhagat Singh films, the films on the Indian army, the films on rock bands, and then there was the time when every other film announced was a biopic of someone or the other. The new fad is of picking up mythological topics.

Yes, you read that right! Ever since the massive success of the reruns of ‘Ramayan’ and ‘Mahabharat’ during the initial days of the pandemic, filmmakers have started greenlighting scripts with anything related to mythology. Even period dramas are getting a lot of attention. Riding on this wave is also actor Akshay Kumar’s ‘Prithviraj’, which delves into the life of Prithviraj Chauhan. It will also mark the Bollywood debut of the former Miss World Manushi Chhillar.

Not just ‘Prithviraj’, here are a few more films on Indian mythology and period drams that are set to release in the coming few months:

After the massive success of the two ‘Baahubali’ films, actor Prabhas has become a pan-India star. One of the numerous projects that he has in the pipeline is ‘Adipurush’. According to reports, the film is based on Ramayana. It assumedly features Prabhas as Lord Ram, Kriti Sanon as Goddess Sita and Saif Ali Khan as Lankesh.

On Diwali last year, Akshay Kumar had shared two posters of his next project ‘Ram Setu’. The film reportedly revolves around the ideals of Lord Ram. In the posters, Kumar was seen clad in a casual shirt, cargo pants, carrying a sling bag and saffron colour scarf wrapped around his neck. The first look of the film in the posters did surely intrigue the curiosity of the audiences. Director Abhishek Sharma is helming the project and it is being produced under the banner of Akshay Kumar’s Cape Of Good Films.

Nitesh Tiwari, who gave Bollywood its biggest money-spinner to date in the form of ‘Dangal’, is reportedly going to make a trilogy on the Hindu mythological epic ‘Ramayana’. As per reports the film is going to be made at an estimated budget of Rs 500 crore and will be shot in 3D and released in Hindi, Tamil and Telugu at the same time.

Actress Deepika Padukone is said to be a part of a multi-part series based on the Mahabharat but said from the point of view of Draupadi. Mahabharat is popularly known for influencing people and giving life lessons but from the perspective of the male gaze most often. ‘Draupadi’ will bring in a fresh new perspective and give in a lot more significance to make of the happenings of the iconic tale.

Actress Kangana Ranaut also announced playing the character of Sita from Ramayana, however with a reincarnated avatar. The film will be helmed by filmmaker Alaukik Desai and the story has been written by veteran screenwriter KV Vijayendra Prasad, who earlier wrote the ‘Baahubali’ series.

Actor Vicky Kaushal will be joining hands once again with his ‘Uri’ director Aditya Dhar for ‘The Immortal Ashwatthama’. It is being billed as a modern-day retelling of the mythological character from Mahabharat, Ashwatthama – the son of Dronacharya. From the unversed Ashwatthama was given the boon of immortality.

Starring actor Ranbir Kapoor and actress Alia Bhatt, the project is said to be based on the mighty weapon named on Lord Brahma which was used in Mahabharat. Directed by filmmaker Ayan Mukerji, the first film in this 3-part series has been in the making for quite a long time. It also stars actor Amitabh Bachchan, actress Mouni Roy and actor Nagarjuna.

Besides these mythological films, there are also films like ‘Chanakya’ coming up which delves into the life of the popular teacher, philosopher and economist of the Mauryan Empire. Actor Ajay Devgn is said to be playing the lead role in the same, which will be directed by filmmaker Neeraj Pandey.

There are numerous such period shows coming up even on OTT platforms. The recent blockbuster hit came from Disney+ Hotstar in ‘The Empire’ which showed the life of the first Mughal emperor in India, Babar. Despite the project getting a little bit of backlash for glorifying Babar, the show went on to become a massive success and a well-appreciated one by critics all over.

If you look at television, there are such period dramas and mythological shows coming up on every other channel.

There are numerous more being made in different regional languages. However, it somehow feels that all of these projects are somehow or the other trying to work only on the Hindu mythology. Hardly are there films or shows talking about or showing other religious myths. There is no doubt that this genre has immense potential, and these films are just the tip of the iceberg, which has lots more to explore and lot many other religions to showcase.