Muslim fundamentalists chopped off Prof T J Joseph's hand on charges of blasphemy in 2010. In this excerpt, he recounts how the Church too let him down. 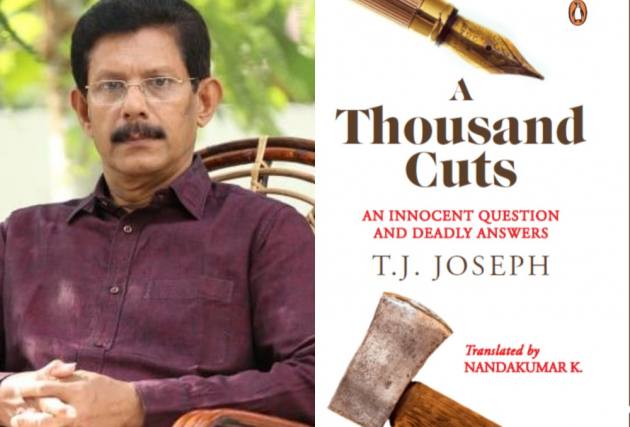 I greeted the bishop with my palms together. I kissed his ring when he extended his hand to me, genuflected and then touched his feet.

‘Please rise,’ said the bishop. As I stood up, a tear fell to the ground from my welling eyes.

He asked me to sit down and then spoke to me for about ten minutes. At the time the trouble broke out in Thodupuzha, he was attending an event in Vazhakulam. When the news reached him, he hurried back to Bishop House. Police protection had been arranged here as well. Finally, he granted me leave to go.

I also met Monsignor Francis Alappatt, the corporate educational secretary, Father Kuriakose Kodakallil and Father Koyithanathu and explained to them my non-culpability in the question-paper matter. I felt like a heavy burden had been lifted off my shoulders when I started back for home.

During the initial days, none of our neighbours or acquaintances visited us and they kept their gazes averted every time they passed by our house. One day, the doorbell rang, and the sight of two strangers in our yard made me nervous.

‘I am Ravi Muvattupuzha.’

Both were rationalists from the Muvattupuzha area. They had come to offer any help that they could provide. I assumed that they had taken me for a fellow-rationalist, who had been charged with blasphemy.

‘I am not a rationalist.’

Ravi said, ‘It doesn’t matter to us whether you are a believer, or an atheist, or a rationalist. We only see you as a human being who is being hounded by religion, the media, and the government. It’s only our humanity that has made us look you up.’

I liked that sentiment; they were also the first people who had approached me offering help. They left their phone numbers with me. A few teachers from Newman College and Nirmala College close to me also visited me. I learnt from them about the steps taken by the college authorities in my absence.

While things were being explained to the protestors on March 26, the decision came from the higher-ups in the management to give up all defence and throw me to the wolves. A press release that I had been suspended was issued. The college principal, Dr T.M. Joseph, held a press conference in which he apologized to the Muslim community for wounding their religious sensibilities. That was tantamount to pouring oil on the fire—protestors turned into rioters.

If the college authorities had been steadfast and honest enough, the controversy would have died down in a day or so. However, they joined the protestors, became their mouthpiece, and showed remarkable alacrity to abuse me. They used their political clout to file the case solely in my name and worked to create evidence against me. The handwritten copy of the question paper was retrieved from the wastepaper basket of the Malayalam department and handed over to the police by Father Raju Jacob Pichalakkat, my ex-student, colleague, and the college bursar. The next day, in his speech in the college church, Father Pichalakkat also announced that finding that paper had saved his skin.

I had always been on good terms with the college management. The manager used to interact with me like a friend. On the first day after this issue flared up, he had advised me to stay away from home on the basis of that friendship.

However, as soon as the management decided to adopt Caiaphas’s justice, he was ready to tell even outright lies. In his statement to the police, he declared that I was unhappy with the management and that was why I had tried to cause them problems by setting such a controversial question.

I had believed that my ex-student and colleague, Father Pichalakkat, would be my sturdiest defender in my absence, holding up my honesty of purpose. However, he proclaimed everywhere that my question did hurt Muslim sentiments.

To my utter surprise and consternation, the following categorical statement was made by Reverend Dr Thomas Periyapuram, in the college’s managing board meeting following the controversy:

T.J. Joseph has insulted not only Islam and Prophet Mohammad with his controversial question. He has done that to our Holy Trinity as well. The poser ‘how many pieces will there be if a mackerel is sliced up’ and its answer as three pieces was written down on purpose to blaspheme the Holy Trinity comprising the Father, the Son and the Holy Spirit.1

We need to take into account that the reverend is a doctorate-holder in Malayalam language and literature, a guide to research students, ex-principal of Nirmala College and the Vicar of the Kothamangalam Cathedral. It was amazing how, in his pursuit of the impetus for the controversial question, his research instincts smashed through the bounds of literature and landed in the hallowed precincts of Christian theology.

This éminence grise and maven conveniently overlooked the documented fact that the dialogue was in P.T. Kunju Muhammed’s article just so he, the reverend, could stir dissension and animus in the hearts of Catholic board members.

While I was in jail, in a contrived op-ed piece on secularism in the Deepika daily, the revered Archbishop Mar Joseph Powathil wrote:

This deed of a teacher should have never come from a Christian name-bearer.

When I read that piece, I lamented that the light from the pellucid Biblical proscription ‘Judge not, and you shall not be judged,’ had not touched the reverend’s heart. Monsignor Thomas Malekudi was the chairman of Deepika, owned by the Catholic Church. I had no idea at that time that this op-ed piece was part of the intrigue to ostracize me.