'The Midway Battle: Modi's Roller-Coaster Second Term', by Gautam Chintamani, a new book released by Bloomsbury India, sheds light on some of the historic moments. 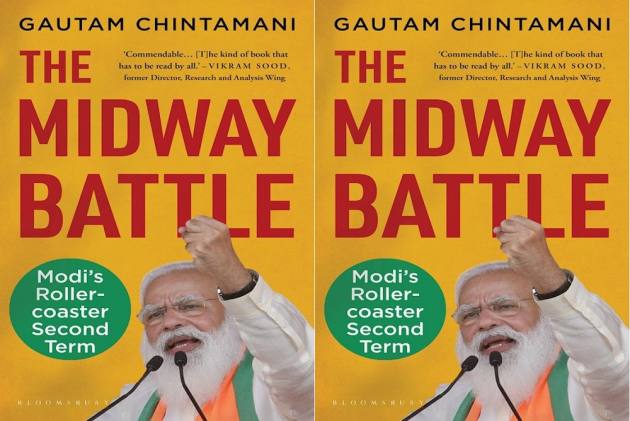 The BJP returned to power in 2019 after winning one of the most significant electoral mandates in recent years. The Narendra Modi government has had a turbulent few years, during which it has implemented far-reaching legislative reforms such as the Jammu and Kashmir Reorganisation Act, triple talaq, the Citizenship (Amendment) Act, and the three farm laws. When these regulations were put into effect, they sparked widespread demonstrations and sparked unrest across the country. The Midway Battle: Modi's Roller-Coaster Second Term, by Gautam Chintamani, a new book released by Bloomsbury India, sheds light on some of these historic moments.

The book is divided into three sections: the run-up to the 2019 Lok Sabha elections, the BJP's win and the involvement of the opposition, and numerous events that occurred between 2019 and 2021, culminating in the second wave of the Covid-19 pandemic.â¯ However, in the prologue, author the author focuses on the impact of the farmer demonstrations since September 2020, and offers some background about agricultural reforms in India.

Gautam Chintamani mentions the establishment of the National Commission of Farmers (NCF) under the Vajpayee government as an example of the failed attempts by the UPA to enact transformation through agricultural legislation. The new book analysing the Prime Minister Narendra Modi government’s second term has argued that every government has promised to transform agricultural laws and give more power to farmers, but each attempt has faced major opposition.

Other topics discussed in the book include the 2019-20 Citizenship Amendment Act (CAA) demonstrations and India's reaction to the Covid-19 epidemic under Prime Minister Modi. Despite the impact that the demonstrations had on India's image abroad and given the consequences of the continuing Covid-19, Chintamani contends that India is now a "major participant" on the world scene. Author Gautam Chintamani takes a broad look at the challenges and triumphs of the Narendra Modi-led government in its second term - from farmer protests to the CAA, India's Covid response to the challenges posed by the pandemic, from India's skirmishes with China to the Balakot strikes.

While the country grappled with internal strife, it also faced challenges from its neighbours. In May last year India was engaged in one of the most intense military stand-offs in decades after an unprovoked attack by China's People's Liberation Army at Galwan. Then there was the devastating Covid-19 pandemic. While Modi government took swift steps to limit the spread of the pandemic in 2020, the second wave of COVID-19 in early 2021 hit the country harder, claiming thousands of lives. But in the process of writing, Chintamani has decoded the man and has tracked down the very arduous journey of Modi in 'The Midway Battle'.

“India is well on its way to establishing its new place in the world, despite obstacles, criticism, and hostility from both within and beyond the country," he writes.

He further writes in the book -

“Between 2014 and 2019, India under Modi re-invented itself on the world diplomacy map. A perceptible difference between the Modi-led NDA government and UPA-I and UPA-II under Manmohan Singh was the manner in which India enhanced its clout as a major player in nearly every sphere as opposed to constricting itself. It had also created strategic alliances across the spectrum, and for the first time in decades, India struck a fine balance in keeping countries on its side. While negotiating with the outside world, the mantra was simple — this ‘new’ India was not going to be second to anyone. The best showcase of this new approach was most visible in the way India began dealing with oil imports. Through ‘oil diplomacy’ efforts focused on Russia, Latin America and Africa between 2014–18, India renegotiated supply contracts with countries that it bought oil from – it increased its investments in Russia to US$10 billion by buying oil fields in addition to its older investment in Sakhalin, it bought a 100 per cent stake in Abu Dhabi’s Onshore Block 1 Concession with plans to invest US$170 million, it furthered its investment in South Sudan and Mozambique, it engaged with both the US and Russia as part of its agenda to diversify from acute dependence on OPEC (Organization of Petroleum Exporting Countries) for energy sources.”

Author Gautam Chintamani seeks to persuade his readers that the country is at a crossroads in terms of both socio-cultural difficulties in India and worldwide issues, such as the COVID epidemic. He seeks to that these difficulties have forced India to compete with world leaders on the world stage.

Prime Minister Narendra Modi was supposed to lead India toward a more capitalist-oriented future and he has succeeded in certain ways. The Midway Battle, which provides a well-researched and nuanced understanding of Modi's second term, sheds light on the socio-political issues confronting India as it continues its struggle against enemies both known and unknown.

Chintamani sheds light on how India, under the leadership of Prime Minister Modi, transformed India’s global image, in sections such as this -

“In his 2019 address to the UNGA, Modi reiterated that the ‘lack of unanimity’ among nations of the world on the issue of terrorism dented the principles that were the basis for the creation of the UN.23 Modi was creating an environment that allowed India to remould its foreign policy as well as the state of affairs with other countries. When Modi addressed a packed Madison Square Garden in New York in September 2014, the event made headline news in the US; Modi made it known to all that ‘India’ was ready to play a significant role across the world. He made the Indian diaspora an important and an almost indispensable part of his foreign policy by integrating them in the future development plans of not only the country they were based in but also India. Modi connected with them through planned outreach programmes as well as urged them to use their political presence in their countries to build stronger relations with India.”

The book's title was inspired by World Conflict II, as a single war may transform history, and the current scenario plainly supports the term, "The Midway." At this point, when India celebrates its 75 years of Independence, Modi has no one else but his own self to compete with. The book covers all the salient features of the government, including Modi’s governance, administration etc. Drawing from his in-depth research and incisive interviews, Gautam Chintamani's engaging narrative reveals so much about where this this government stands right now and which direction it is headed towards.

(Reviewed by Ashutosh Kumar Thakur, a Bangalore-based management consultant, literary critic and co-director of Kalinga Literary Festival. He can be reached out at ashutoshbthakur@gmail.com)