Deepika Padukone, Alia Bhatt And Anushka Sharma And Other Bollywood Celebrities Wish Vicky-Katrina On Their Wedding

As the ceremony concluded, several celebrities took to social media to congratulate the newlyweds. 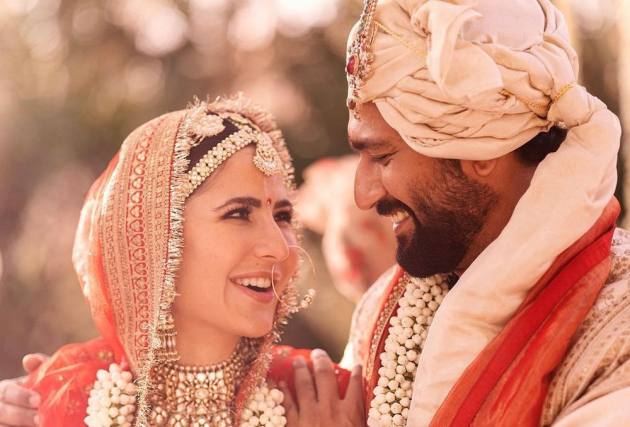 Several Bollywood celebrities including Alia Bhatt, Anushka Sharma and Deepika Padukone were amongst many others who wished actors Vicky Kaushal and Katrina Kaif after the couple tied the knot on December 9 in Rajasthan amidst tight security.

Anushka Sharma's message for the newlyweds revealed that they are indeed moving into the same building as hers. She penned a heartfelt message on her Instagram story. 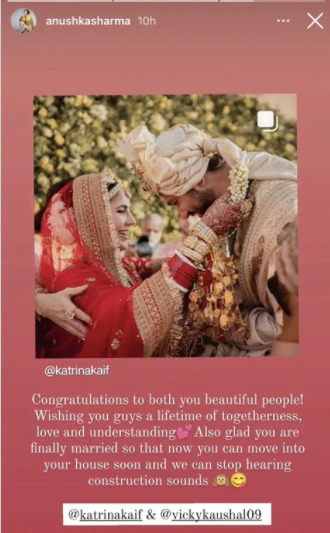 Karan Johar also joined the bandwagon and shared a picture of the newlyweds from the wedding ceremony. Fans quickly took to the comments section of his post to call him the 'matchmaker' between the couple. 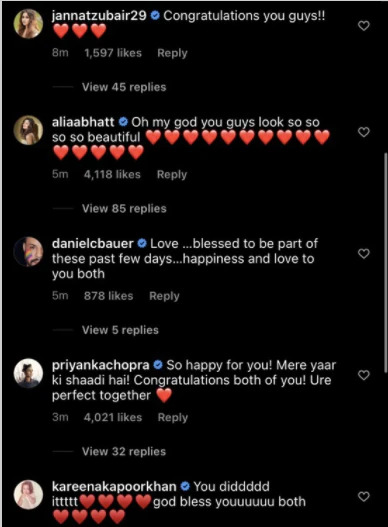 However, Salman Khan's sister Arpita Khan's heartfelt wish for friend Katrina Kaif stands out. Arpita Khan and her brother were not seen at the wedding, but she took to Instagram stories to wish Kaif through a warm message. 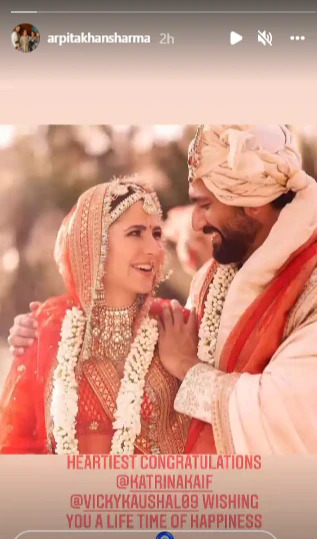 On December 9, actors Vicky Kaushal and Katrina Kaif married at the Six Senses Fort Barwara in Rajasthan, amid tight security. The first photos from their wedding have been released. He donned a sherwani and she wore a pink lehenga. Celebrities like Neha Dhupia, Angad Bedi, Gurdas Maan, Malavika Mohanan, Sharvari Wagh, Radhika Madan, Kabir Khan, Mini Mathur, and others were among those who attended. Salman Khan, Katrina's close friend, and his family, however, did not attend the wedding. For the 'Da-Bangg' tour, he flew to Riyadh.