The movie which features Ayushmann Khurrana and Vaani Kapoor, 'Chandigarh Kare Aashiqui' has received praise for its adept handling of a sensitive topic.

'Chandigarh Kare Aashiqui' is a romantic comedy starring actors Ayushmann Khurrana and Vaani Kapoor. The film is now playing in theatres and has received positive reviews from critics and audiences alike. Several Bollywood actors took to social media to applaud the film's brave handling of a bold subject which relates to something along the beliefs of what a queer collective would stand for. The film subtly addresses issues faced by transgenders according to netizens in their approach to this sensitive topic. Actor Arjun Kapoor applauded the film on Instagram, tagging Ayushmann Khurrana and Vaani Kapoor, describing it as a "fantastic little gem." 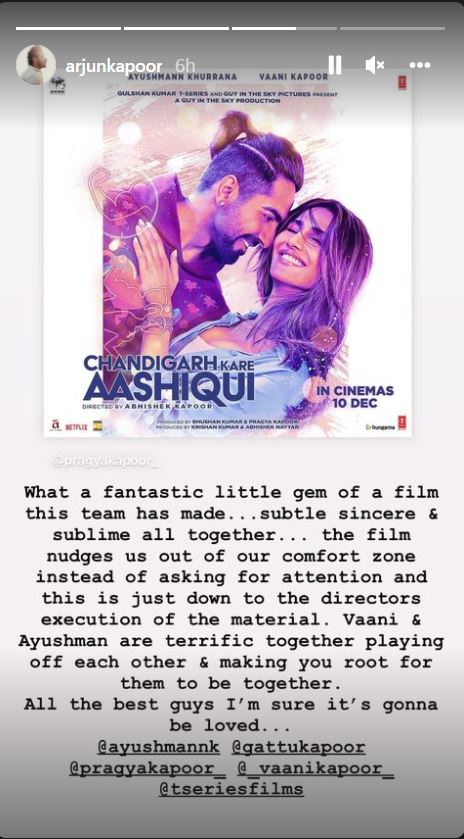 Genelia Deshmukh, an actress, also tweeted in support of the film.

Taran Adarsh, a film trade expert and critic, lauded Vaani Kapoor for taking on such a bold portrayal.

The Abhishek Kapoor-directed film follows Ayushmann Khurrana and Vaani Kapoor's characters through a "progressive love story." Khurrana said in an interview with PTI that he was ecstatic that his film, which had a unique script, was getting a theatrical release.

He said, “This is very special for me because it’s happening after two years. It feels like this is my first film, my first launch. I’m getting those butterflies. I’d like to thank Abhishek sir for his vision and Vaani Kapoor for being a revelation in the film. It’s an extremely unique script that we have. I’d like to thank the audience for supporting the theatres."

Vaani Kapoor also spoke about her experience on shooting the movie and said, “I’m extremely happy and grateful that I got this film… We were all just like a mini family shooting the film in Chandigarh."