The majority of the film is peppered with deliberate attempts at creating shadowy moments devoted to arguments between the various characters. Once it becomes a routine, it quickly becomes awfully tedious. 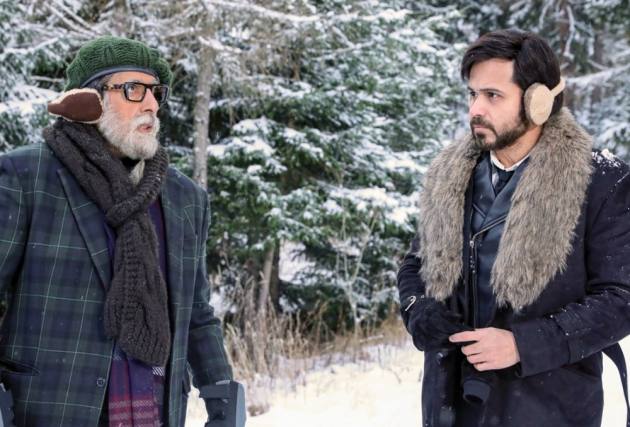 For any actor who has had a long innings doing lead roles, acting his or her age doesn’t come easy.  Most often, for many of them, it can be very challenging to continue to enact main characters, or at least, play one of them, and still leave their mark.  If only writers wrote out-of-the-box characters for veteran stars, and filmmakers dared to cast senior stars in roles that did justice to their age and talent, we would have had many from among the list of thespians in far more interesting films.

Big B who continues to enjoy a special  status in Hindi cinema is at that stage of his career where even if he isn’t playing the hero, he hogs all the prominent scenes by delivering dialoguebaazi, and precious little else. In nearly all his films, he plays the all-knowing patriarch/lawyer/ leader who cannot go wrong, but in terms of the length and impact, is given the meatiest part to play. As expected, he reprises his oft-repeated performance in every film. Sadly, the result is invariably predictable with little thought that goes into his characterisation to allow any variation. He is not an actor who doesn’t go against his persona as a chameleon actor who can play a variety of unrelated roles adding verisimilitude to stories.

Chehre directed by Rumy Jafry, and written jointly by Ranjit Kapoor and Jafry, is a film about rights and wrongs. A group of reclusive and rather eccentric friends - Lateef Zaidi (Bachchan), Justice Jagdish Acharya (Dhritiman Chatterjee), Paramjeet Singh Bhuller (Anu Kapoor) and Hariya Jatav (Raghubir Yadav) - lead retired lives in a hill station. They love playing a real-life game that involves getting a stranger into their house, putting him in the dock and then conducting a mock trial. What always follows is the stranger falling into a trap, giving in to the cross questioning and willy-nilly revealing a concealed and veiled past that makes him spill the beans and let the cat of the bag.

One evening as poor weather conditions, frozen raindrops and ice pellets block roads, a CEO of an advertising firm Sameer Mehra (Emraan Hashmi) while driving back to Delhi, gets stuck when a tree falls on the way and prevents him from moving further. He is offered help by a stranger Bhullar who presents a hopeless picture of the place. With no hope for any possible help and not a soul in sight, Sameer agrees to accompany Bhullar to his friend’s place nearby. Once they reach a beautifully decorated wooden house in the middle of the storm, he gets to meet Acharya, Jatav and later Zaidi. Soon he finds out that the four have a penchant for playing a game that involves a stranger getting subjected to intense scrutiny. The four friends insist on Sameer participating in a sadistic game of cat and mouse in which they are the hunters and he is the prey. Mehra plays along taking the entire idea as an innocuously fun-filled exercise that would do no harm at a time when given the turbulent evening, he couldn’t have reached his destination. He decides to play along jokingly. But when the trial begins, what seemed like a mere game turns sombre, and finally spins into a deadly game divulging secrets and exposing a side that Sameer could never imagine would be out. And so, Justice Acharya sits in judgement, Bhullar agrees to be his defence counsel and Zaidi the public prosecutor, Jatav the executioner, while Sameer is placed in the dock on a fictitious murder trial.  At first, he displays casual approach and indifference, but as the game progresses he begins to crack under pressure, and shares his crime of cheating on his wife and having an affair with his boss’s wife Natasha Oswal (Krystle D'Souza).

The four firmly believe that justice must be served during the course of the game, and during interrogation, have no qualms about delving deeply into Sameer’s personal life that gets unmasked and lays wide open some of the mysteries that surround him.

One of the common ways to introduce a villain is to equate him as much as possible with the hero of the role, and gradually peel off layers to uncover more truth. As the fake trial begins both Bachchan and Hashmi decide to apply their character’s ideology in a completely opposite manner. It doesn’t help for the audience to look for any excitement since it takes far too long to get to the much anticipated twist that we all see coming from the first ten minutes, but unravels only towards the end. That obviously leaves the poor viewers to forcibly sit through more of a predestined drama rather than a thriller. Soon after introducing an element of mystery into the story, the writers weave subplots into the thin narrative that quickly devolves into an absolutely endless piece of work rife with underdeveloped elements and one-dimensional characters.

Once Bachchan – who, by the way, has a “special appearance” as per the credits - emerges, all others begin to play subsidiary roles. As everyone looks on, he even delivers a nearly ten-minute monologue in the climax scene that looks more like summing up of the director’s determined objective about his reasons to choose a subject that differentiates between “kanoon” (law) and “insaaf” (Justice). Chatterjee, Kapoor and Yadav are all competent performers who deserve more than what Bollywood’s staple recipe for casting big names in less important roles has been. They do their best to stay within their limitations of the screenplay allowing both Hashmi and Bachchan to remain on centerstage. Hashmi playing his image of a debonair hotshot executive with elan, tries to rise above the weak script.

With brilliant camerawork by Binod Pradhan, the majority of the 138 minute film is peppered with deliberate attempts at creating shadowy moments devoted to arguments between the various characters. Once it becomes a routine, it quickly becomes awfully tedious. Jafry’s refusal to give us a reason to care about any of these characters ultimately sinks the film and, worse, makes it an uncommonly interminable experience!