The Janhvi Kapoor-starrer 'Gunjan Saxena' falls short of expectations, largely because of Bollywood’s all-too-familiar proclivity to use the ‘cinematic licence’ to make a mess of an inspiring real life story. 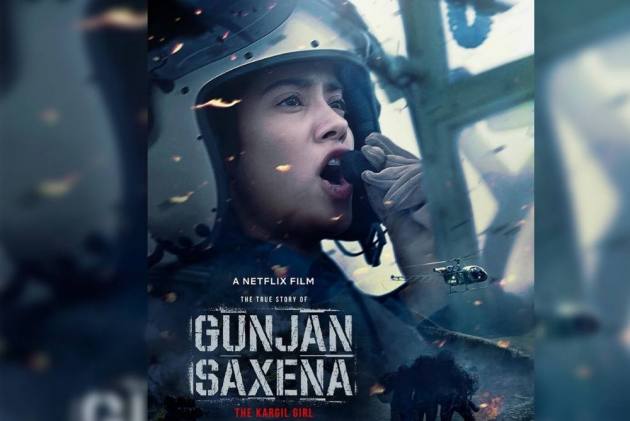 Rating: Two stars (out of five)

Everything else in Gunjan Saxena seems otherwise alright – an inspiring story of a young girl chasing a seemingly impossible dream, an endearing father-daughter relationship to warm the cockles of your heart, and creditable performances by the star cast. But why has it tarred the Indian Air Force to be a highly misogynistic place on the pretext of cinematic liberties?

Ideally, Karan Johar's Gunjan Saxena should have been a great feel-good film, a riveting work of cinematic art based on an extraordinary story of a gritty woman who breaks the glass ceiling to be able to live her childhood dream on a turf traditionally overrun by men.

After all, it is -- or at least it is deemed to be -- a biopic of a former flight lieutenant Gunjan Saxena, the first woman combat pilot of the Indian Air Force whose heroic sorties made her a hero during the 1999 Kargil war against Pakistan. But the film falls short of expectations, largely because of Bollywood’s all-too-familiar proclivity to use the ‘cinematic licence’ to make a mess of an inspiring real life story.

A Lucknow girl Gunjan Saxena, played by Janhvi Kapoor, aspires to become a commercial pilot for the sheer joy of flying an aircraft, not for any patriotic emotions. Encouraged by her father, portrayed by a brilliant Pankaj Tripathi, she chases her dream until she makes it to the Indian Air Force despite facing all odds in a patriarchal society. Her army man brother (Angad Bedi) tries to talk her out of joining a service “not safe for women” but she sticks her neck out.

The narrative progresses well till Gunjan reaches the air base for her training. That is where Bollywood’s hoary predilection for stereotypes with cardboard characters comes into full or foul play. That is not surprising, though. Barring an occasional Chetan Anand‘s Haqeeqat (1964) or J.P. Dutta’s Border (1997), Hindi cinema has rarely done justice to the movies based on the armed forces so far as accurate presentation is concerned. In this film, too, the director Sharan Sharma and the writers Nikhil Malhotra and Sharran Kumar) seem to have conveniently forgotten the contribution of the Indian Air Force in shaping the destiny of Gunjan and in helping her reach where no other woman had gone before. If one goes by the film’s version, the IAF had found her promising enough to let go of the vital eligibility criterion of height so as to facilitate her entry in the force.

And yet, the Air Force base has been depicted in the film as if it were a boys-only school hostel where teenagers ogle at Pamela Anderson’s posters, sway to the beats of Choli ke peeche kya hai, crack sexist jokes and want only men who can arm-wrestle with one another, or, in their words, “only those who can shed blood, not tears” to join their ranks Worse, there is no toilet and a change room for the women at the air base. And they are talking here about the late 1990s!

The problem with Bollywood is that it wants to have the best of both worlds. They want to cash in on the popularity of a popular figure by making a biopic but also interpolate fictional masala to make it a  commercially overcooked project. That leaves the audience in a fix when it comes to distinguishing the fact from the fiction in such films. Going by what is shown in Gunjan Saxena, the audience has every reason to believe that the poor lady pilot had no place to change her uniform in the sprawling air base, where all her male colleagues looked on at her predicament with misogynistic glee on their faces. Come on, Bollywood, IAF deserves better than this Gunjan Saxena!