I find it stupid that people are doing such acts just to get some publicity, says Richa Chadha on death threats over her film Madam Chief Minister. 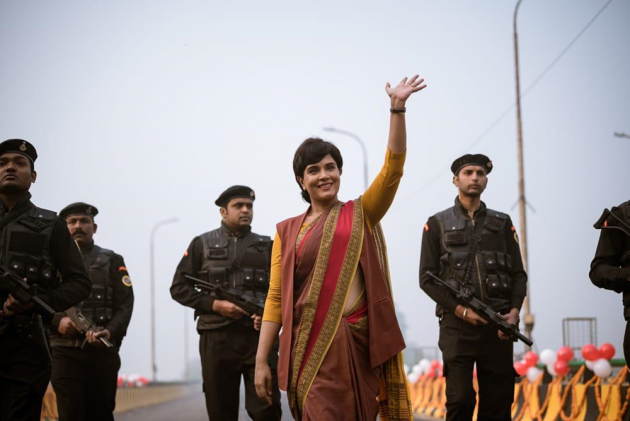 Playing a Dalit leader in Subhash Kapoor’s movie, “Madam Chief Minister” came with pitfalls for Richa Chadha. First, the first look of the film got into trouble for allegedly stereotyping Dalits and then came the death threat from a politician. She talks about her film and how hard she had to work to play the role of the Dalit girl Tara. Excerpts:

I am not even paying attention to it. I find it stupid that people are doing such acts just to get some publicity. I don’t want to amplify the situation.

Getting the role of Tara in ‘Madam Chief Minister’…

I got a call from the director of the film, Subhash Kapoor and I met him. He had a very different image of me in mind, he thought that I was loud and crass. He was surprised that I wasn’t like that and I had an academic background. He asked if I would be able to do the role because the character is so rough and aggressive. Since I like taking challenges and doing roles like this, I agreed to it and we were on for this project.

Preparing for the role in terms of diction, mannerism and research…

Diction and mannerism weren’t the difficult bit. In fact, in all my films, for example, in the “Bholi Punjaban” character, it is based out of western Delhi, so I used the Rajouri Garden-type of language. In “Ram Leela”, I used the Gujarati diction and in “Love Sonia”, I used the Maharashtrian diction. So, I love working on different dictions and when other actors don’t do it accurately, I judge them very harshly and it annoys me too.

For this role, I used a western UP diction. I took my driver’s help because he is from that belt. I sat with him and worked on the body language as well. I worked on the clothes that I would wear so that it suits the role. Usually, in Hindi films when we talk about a tomboy, she is generally seen in some sporty clothes like Kajol from “Kuch Kuch Hota Hai”. But that’s not the case here. The character that I am playing is different. The girl is a tomboy because of her reactionary logic. Two of her sisters get murdered, so in her case, it is a survival thing and not just about appearance. So, I worked on playing the character accordingly.

You have played very unconventional roles and each role is very different from the other. You stayed away from the typical Bollywood films also, are you choosy about the roles that you get or is it that this kind of roles comes to you…

It’s both. I choose these parts. And what also happened and you rightly pointed out, if you start with a film like the “Gangs of Wasseypur”, people know your interest and they know that this is the kind of cinema that you want to be a part of. But that doesn’t mean that I say yes to everything that comes my way. Sometimes I say yes, sometimes I say no.

How was the film a learning experience for you?

The role that I play of Tara in “Madam Chief Minister” is that of a fighter and she doesn’t give up in spite of the threat of the lives of her loved ones. The main thing that I learnt from Tara is how to be a survivor. The character that I play had to face both gender and caste discrimination and I felt that there is a lot to learn from someone like Tara.

Is the character close to any particular political personality?

The character was made by taking bits from many politicians, both men and women. When you watch the film, you might feel that some part of it will remind you of Karunanidhi, some part of it will remind you of Benazir Bhutto’s life. So, it’s not based on any particular person or place. But as usual, people like to connect a certain film character with some real-life personality. Subhash Kapoor is a political journalist, so a lot of inspiration has come from his personal experience when he interacted with politicians.

How much research you did for this role?

I anyway do a lot of research because that is the way I like to prepare myself. My director gave me a lot of books to read which were political biographies. Apart from reading on political biographies, I also read up on the role of caste in Indian politics. So that way also the film has been a learning experience because I feel no one is perfect. There are so many things we feel that we know like when we are in school, we are taught that Dr B.R. Ambedkar is the father of the Indian Constitution and that was all that one would know about him, but when I started working on this film, I learnt so much more about him. I understood what Ambedkar meant to the Dalits of the country and what he was fighting for in his whole life and why he chose to convert.

I am currently in the hills of Uttarakhand shooting for a show. I will come back to Mumbai and work on “Fukrey 3”. I am doing another show which is a crime thriller. All the work that none of us could do last year has all piled up.