From Karan Johar to singer Adnan Sami, here is what the Bollywood celebs have to say on being conferred Padma Shri. 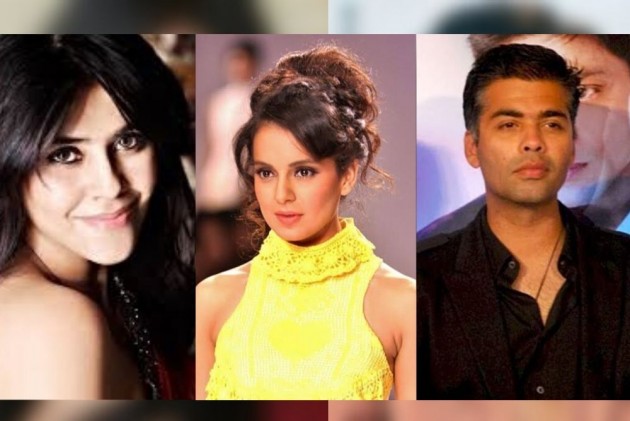 While people from different walks of life were recently conferred Padma Shri, Padma Bhushan, and Padma Vibhushan awards for their respective contributions to the nation, many Bollywood biggies too made it to the list.

Bollywood celebrities like Kangana Ranaut, Karan Johar, Adnan Sami and Ekta Kapoor who were recently conferred with Padma Shri award for their outstanding contribution in the field of performing arts.

Delighted about Kangana being honoured,her fans shared a video in which she is seen thanking the government for having been the recipient of such a prestigious award.

In the video, the actress said, “I’m humbled and I’m honoured. I am grateful to the Indian government, my fans and friends. I thank my country for this recognition and I dedicate this to every woman who dares to dream. To every daughter... to every mother... and to the dreams of women who will shape the future of our country.”

It's a moment of extreme pride for #KanganaRanaut, her team and everyone who has been working tirelessly towards receiving this prestigious accolade, #PadmaShri. Kangana whole heartedly thanks the Government of India, all the well-wishers and fans for the immense love and support. She sends her deepest regards straight from Chennai where she is shooting for #Thalaivi. Jai Hind. ðÂÂ®ðÂÂ³ðÂÂÂ

Filmmaker Karan Johar too expressed his happiness for having recieved the award. Taking to his Twitter handle, he shared a heartfelt poat with his fans. “It’s not very often that I’m at a loss for words, but this is one such occasion. The Padma Shri... such an honour to receive one of the highest civilian awards in the country. (I am) Overwhelmed by so many emotions right now. (I am) Humbled, elated and also thankful for the opportunity to live my dream every day, to create and to entertain. I know my father would be proud and I wish he was here to share this moment with me,”

Expressing immense happiness, Ekta Kapoor too took her Twitter handle to thank the government and her fans for being conferred Padma Shree. She said "overwhlmed" and "emotional".

“Overwhlemed and emotional. My foray into the industry started when I was just 17. I constantly heard I was too young, too raw and it was too soon to make things happen. Through the years, I have realised it is never too soon to live out your dreams and being too young is probably the best thing. Today, as I am conferred with the 4th highest civilian honour, Padmshri, I’m humbled. I hope to continue breaking boundaries, to continue giving young talent a chance and to strive to give back to the country all the love that’s come my way. The timing couldn’t be more perfect as the news comes 2 days before my son’s first birthday. Grateful and thankful,” she wrote.

Singer Adnan Sami also did not shy away from expressing his happiness over the honour, and said, “The greatest moment for any Artiste is to be appreciated & recognised by his/her government. I am overwhelmed with infinite gratitude for being honoured with the ‘Padma Shri’ by the Government of India."

"It has been a 34 years musical journey..‘Bohot Shukriya’!!" he added.

The greatest moment for any Artiste is to be appreciated & recognised by his/her government. I am overwhelmed with infinite gratitude for being honoured with the ‘Padma Shri’ by the Government of India.
It has been a 34 years musical journey..
‘Bohot Shukriya’!!ð#PadmaAwards