On the occasion of Christmas, Farhan shared a cute picture with Shibani wishing his fans a Merry Christmas from the Mad-Hatters. 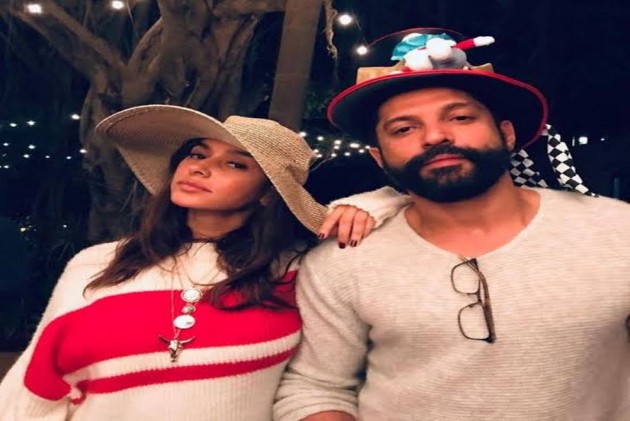 Farhan Akhtar recently wrapped up the schedule of Rakeysh Omprakash Mehra's Toofan. The actor was really prepping hard for the movie. In spite of being injured, the actor did not stop shooting. Farhan is quite active on social media. He has been posting photos with his ladylove Shibani Dandekar since the two revealed their relationship in public. They have been posting cute pictures with each other and sometimes even comment on each other's posts giving some major couple goals. On the occasion of Christmas, Farhan shared a cute picture with Shibani.

In the photo shared, Farhan is donning a grey sweatshirt with a cute Christmas hat, on the other hand, Shibani is donning a red and white sweater with a cool summer hat. Giving an intense look while posing for the camera, Farhan captioned the picture as, "Merry Christmas from the Mad-Hatters .. #seasonsgreetings." Farhan Toofan co-star Mrunal Thakur commented, "Awww you two Merry Christmas." Harshvardhan Rane commented with a heart. Farhan even shared a cute picture of his pet dog on his Instagram story. Putting a Christmas band on his forehead, Farhan wrote, "Maine Kaha Merry Christmas."

Talking about Toofa, directed by Rakeysh Omprakash Mehra, the film is produced by Farhan Akhtar, Ritesh Sidhwani, Mehra, P. S. Bharathi and Rajiv Tandon. The film also stars Paresh Rawal and Isha Talwar. Toofan revolves around a boxer, played by Akhtar, who does hard work for winning a boxing match. Paresh Rawal plays the role of Akhtar's coach. The movie is all set to hit the theaters on 2nd October 2020.