Fashion And Hip Hop – A Bond Made For Life

You cannot talk of hip hop and not talk about the fashion associated with it. The style statement of the rappers is distinct. Here’s charting a bit about the when’s and why’s behind this unique sartorial choice. 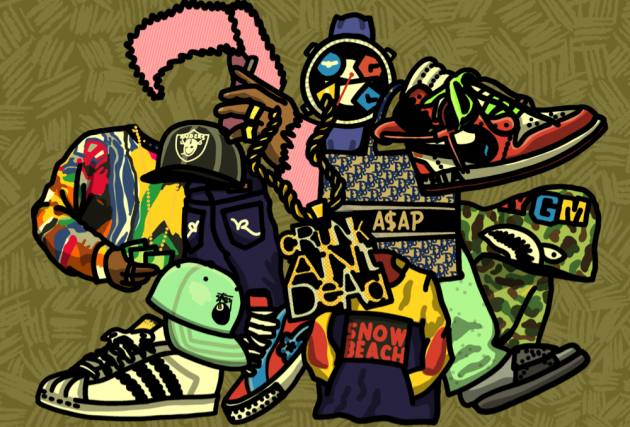 Hip Hop is probably the only musical genre, where the choice of clothes or fashion dictates the kind of music, one creates. It also reflects the part of their society, their culture, and all that, which has helped them become who they are.

“It all comes from a place of being a fan of the culture. The culture is more than just the music. It's everything - starting from the slang to the fashion to the way you carry yourself to your dancing,” says Shah Rule, who is known for his eccentric fashion choices.

“The clothing is something that I have always been super interested in. I have always been into caps and therefore I have this cap merchandise as well of my own. It does come from always watching hip hop videos and being fascinated with the jewellery as well also. I have to say that I am a Sindhi. So, I was always naturally around a lot of shiny things especially seeing my Nani and my mum always wearing gold. I feel that the combination of me wanting to be a rapper and me being a Sindhi just joined together and give me a shiny personality,” he adds.

Fashion has always been used as a tool by rappers to express their identity and the issues they faced. “The reversed cap, we are used to seeing now as a style statement now is actually a baseball cap which these baseball players used to wear. Now, the rappers are also being sponsored by the same Adidas, Reebok and Nike who are also sponsoring the sports team, they would get the same clothes that the baseball players would get. But they were treated differently, so the rappers started giving a different treatment by wearing it reversed. So, that’s how the whole culture of baseball caps and sneakers started coming in. It’s only recently that these brands started making outfits specific to rappers,” adds D’Evil.

Orissa based rapper Dule Rocker too understands the importance of looking a certain way for his music videos. “I apply kajal under my eyes because it was something our mothers did when were kids just before we used to sleep. It was done to not let anything bad enter our eyes when we are asleep. Now, I use it to show my heritage and my culture to other people. It is something that I am really proud of, and it helps me add more authenticity to my music overall as well,” he says.

Kerala based rapper Fejo understands the importance, but also adds that rappers should be careful of not mindlessly aping the West and go after bling or other fancy clothing items. “You have a Mercedes car in the background, and you are wearing flashy clothes with the bling and all. But then you are rapping about the hardships you faced, or that you are poor. No one is going to believe you or take you seriously,” he adds.

Deep Kalsi recalls aping his favourite rappers from the west when it came to fashion choices. “I didn’t know anything back when I was starting. So, I used to look at how the rappers in the West dressed up during the music videos and I started also dressing up like that. Loose t-shirts, baggy jeans, or pants with multiple pockets, and now it has come to a point that I can’t even imagine wearing anything that is body fitting or tight. It just makes me really uncomfortable. So, wearing loose clothes has almost become a lifestyle now,” he adds.

Therefore, it is imperative, to dress like whom you are and not imitate someone else. “At one point, I used to wear jackets because we had no idea of what to do. We were just aping what we were seeing the American rappers do,” says D’Evil, adding that he now just wears in t-shirts and shorts, because Mumbai’s weather doesn’t allow him to wear anything heavier.

“Because I live in Bombay and the city is a toaster oven. If you are wearing a jacket here, you will just melt. If you're from Delhi, wear jackets as much as you want. It will suit your weather. So, that's what I would like to suggest to everyone is that your style should come from a place which defines who you are and your surroundings. It would look really, really stupid if I am roaming around in my jacket. People in Bombay would not take me seriously. So there has to be a reason behind the fashion as well and it is not just that rappers are wearing something just like that,” he adds.

For many, fashion choices also help them keep a lid on their personal identity, something which they are not completely open to sharing in public. “You will mostly find me in solid colours like black, most of the time. The idea is to not give away anything else other than that piece of music. I am very conscious about that, and that’s the reason why I don’t do many press interviews either. If I talk about myself through my clothes or during interviews, then no one will listen to my songs, because they already know about me through my fashion choices. But yes, since rap is more like a lifestyle, it becomes extremely important to focus on these things,” adds the Dehradun-based rapper Karma.