Dabangg 3, in short, is strictly for those whose sense and sensibility is not offended by mindless masala entertainment -- for those who can just sit back and enjoy 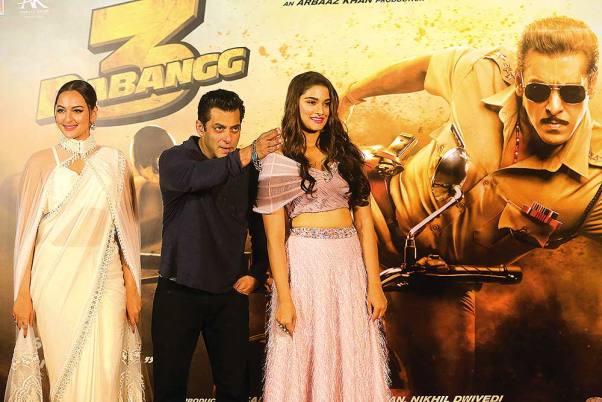 So you thought Bollywood is going through a big churn, with new-age film-makers and stars leaving their footprint with realistic cinema? Wait, our Bhai will have none of it! Who says the baggage of the past cannot be carried forward with swag and swagger. Whether a movie, with all its trite tropes, looks dated or not, he has the torso to pull it off with unmistakable elan. If a fan base of millions worth a minimum of Rs 200 crore is willing to consume old wine in an old bottle, why should our Bhai dismantle his flourishing winery for the sake of quality cinema?

Actually, you don’t need to get into a time machine to go back to the commercial cinema of 1970s and 1980s. All you need to do instead is saunter into a nearby multiplex and watch Dabangg 3. Bhai’s third and latest instalment has everything which most of us (Bhai as well) grew up watching in our formative years.

Despite Being An Ode To Formula Films, What Makes Salman Khan’s 'Dabangg' Series Tick

If you are still in that retro mode you will jump in delight to see this film, especially its climax where our heroine, tied to a rope at a godforsaken hideout of the villain, is waiting patiently for her saviour to rescue her. Oh, how thrilling is the high-octane action sequences between two bare bodied hulks on different sides of law!

Bhai plays Chulbul Pandey, a comical cop with a serious intent to protect law in his own way, one more time in Dabanng 3, which has come seven years after its previous instalment. But nothing appears to have changed in his universe. Bhai’s looks, abs, his wife and brother all look the same. Some freshness is, of course, provided by an episode of his sweet little romance of the past with a young girl, which ends on a tragic note. The rest is an all too familiar narrative woven around the good old theme of vendetta, which had begun to spawn yawns in single-screen theatres long before the multiplexes arrived.

The problem while watching Dabangg 3 will arise only if you -- like any hard-nosed film critic worth his stars -- go looking for nous and nuances in a film like this. Remember, a Bhai film is what a Bhai film does. It caters only to his admirers who are too loyal to find anything repetitive in his films. They love to see him doing the same thing again and again. Even though they have watched Bhai tear off his shirts and flaunt his abs multiple times, they still clamour for more. Forget gripping story line, cohesive narrative, taut script or great performance, just give them Bhai doing what he does best onscreen. Nothing else matters.

Dabangg 3 lives up to their expectations. It is an out and out Bhai movie. Bhai boley toh Salman Khan, the reigning monarch of Bollywood who refuses to change with the times. And why should he? Barely a week ahead of his 55th birthday, he still looks in fine fettle out to please his fans, whether he has to dance or romance with girls younger than him by three decades or so. His chemistry with Sonakshi Sinha, who plays his wife Rajjo, is as crackling as ever and he does not look ill at ease romancing a 21-year-old Sai Manjrekar who makes a promising debut.

Southern superstar Kichcha Sudeep is quite menacing as a worthy antagonist to Chulbul Pandey. Director Prabhu Deva has done his best to make the most of the script, written by none other than Bhai himself, at his disposal.

Dabangg 3, in short, is strictly for those whose sense and sensibility is not offended by mindless masala entertainment -- for those who can just sit back and enjoy. Others can enter at their own peril.