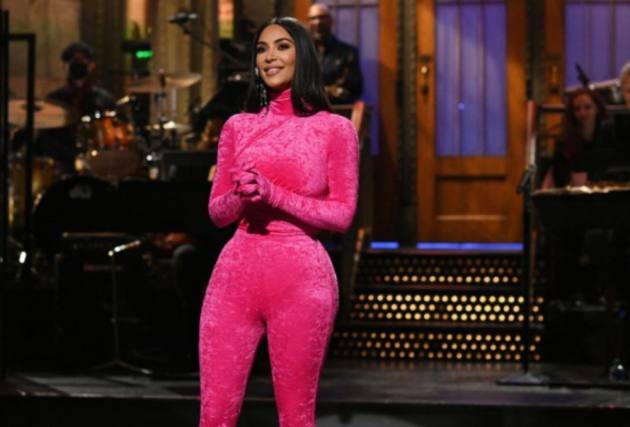 Reality TV star became a darling on social media following her debut appearance on the popular TV show ‘Saturday Night Live’. Internet users lauded the 40-year-old, after she poked fun at her family, her estranged husband and the popular reality show ‘Keeping Up With The Kardashians’.

Kardashian also managed to feature in a star-filled sketch that had special cameos from the likes of John Cena, Chace Crawford, Chris Rock among others.

From jokes about her stardom, to her estranged husband Kanye West and the entire Kardashian family, here are five top moments from Kardashian's debut performance.

Roasting Kanye West in her monologue

Kim managed to take a massive dig at estranged husband Kanye West as she joked about their divorce. While calling him the "best rapper of all time", Kardashian listed out several positives of West, only to end with a dig that said, "When I divorce him you have to know it came down to one thing: his personality."

During a sketch that was titled "The People’s Kourt", Kim not only pulled off a great impression of her sister Kourtney Kardashian but also managed to mock her PDA-filled romance with Blink 182 drummer Travis Barker. In the act, Kim as Kourtney was seen packing on the PDA with Mikey Day, who impersonated Travis Barker. The act also had Pete Davidson and Chloe Fineman make an appearance as Kourtney and Travis‘ friends Machine Gun Kelly and Megan Fox.

For a hilarious sketch, Kim and SNL cast member Pete Davidson turned into Aladdin and Jasmin where they enjoy a magic carpet ride together. While Kardashian's Jasmin insults Aladdin calling him a "lowly street rat" and a person whose only friend is a monkey, Davidson's Aladin expresses his concerns over getting intimate with her. The duo also ended up sharing a kiss during this act, leaving fans to go into a frenzy.

As Kim turned into a Bachelorette lead for a sketch, she managed to hand out "love tokens" to some famous suitors with John Cena, Blake Griffin, Chace Crawford, Jesse Williams Chris Rock and Tyler Cameron appearing in the act. One of the most epic moments from The Dream Guy sketch though was Kim and Amy Schumer's chemistry.

In a part of The People's Kourt sketch, Kris Jenner who also made a cameo in the SNL episode was seen suing her youngest daughters, Kendall and Kylie Jenner. The momager lists out her reason for suing her daughters and says Kylie's pregnancy is costing her money whereas Kendall offers "no drama."