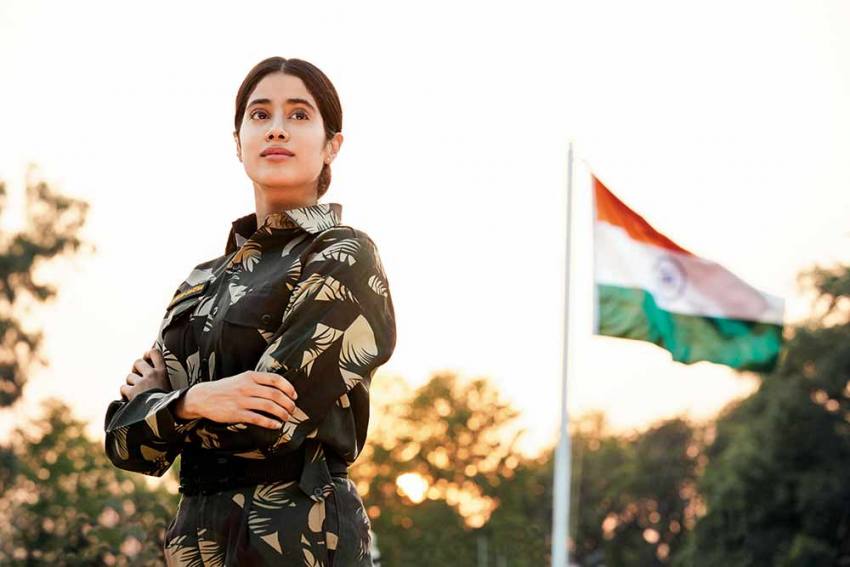 In an exclusive conversation with Outlook, Retd. Squadron Leader Deepa Nailwal who was among the first batch of women officers of the Indian Air Force (IAF) in 1992, says the Jhanvi Kapoor-starrer 'Gunjan Saxena' is factually incorrect in many places. Squadron Leader Nailwal feels the film has projected Indian Air Force in bad light and has taken too many creative liberties. Edited excerpts:

Why do you say the film Gunjan Saxena is factually wrong?

As a first-batch women air force officer, I certainly can see many areas where it is factually incorrect. Even people who are not part of the air force feel a lot of things have been exaggerated beyond belief. For instance, the SSB (Services Selection Board) routine, where they call potential candidates, where the students go through various assessments for five days, that's a very powerful experience. But in the movie, it is completely diluted. So when you see the film, you feel a little cheated. The way it has been projected is not correct at all. I know exactly how it is done because I have been an officer who was posted in SSB for three years and was a part of the selection procedure. In fact, when we announced the short-listed candidates, we used to take a lot of precautions not to make anyone feel small. I have selected batches after batches; the whole process is so beautiful. People who go to SSB, even if they are not selected, they have fond memories of those days. The film has shown this entire process in wrong way.

Opinion | Dear Makers Of 'Gunjan Saxena', You Cannot Peddle Lies In The Name Of Creative Freedom

‘Our Team Collected 5,000 Pages Of Research Notes Before Writing The Film’: Director Of Gunjan Saxena

Do you also feel the entire Indian Air Force is shown in a poor light?

The male officers are shown to be very rude and projecting them in such a manner is extremely irresponsible. My worry is people who are not in services will get a very wrong impression of defence officers. The whole behaviour of the Flight Commander is exaggerated and extremely worrying. We understand that the need was to showcase the achievements of a woman officer, but in the process, they have painted the male officers completely black. That was just not required. The makers of the film could have shown a realistic picture where some male officers were not very open to the idea of female officers joining the forces. But they have projected it in such a way that the entire bunch of male officers was against their women colleagues. There was a small proportion of people who did feel that it was not the right decision to take lady officers in the forces but that was all. I feel the film is going to make the life of the women in the forces more difficult now.

What impact do you think the film will have on Air Force officers?

The film may impact the current camaraderie between female and male officers. They should have been careful about how this was projected. This is not an ordinary movie. It is a movie about a major decision taken by the Indian government and the Indian Air Force to take women officers. IAF was the first service that took this step, we were the first twelve women in the batch of 1992. Of course, there were teething problems; any big change always comes with apprehensions, confusion and anxiety. But the majority of the men welcomed the decision. I wish the makers of the film had shown how initially there were apprehensions and how in a few months, the scenario completely changed. That area of acceptance is missing. You see that happening right at the end of the film in Kargil where you see the air crash taking place, which by the way never happened.

Do you think the filmmakers have taken too many liberties?

The overall feel of the film is good. The filmmakers had the ability to make a great film, but when it comes to authenticity, they stop midway. I am a cinema lover and I believe that cinema should be entertaining, educational and informative. All three can go hand in hand. But here, their focus is too much on the entertainment part and they have introduced stuff which is not real. In fact, if they had made the film as it actually happened, it would have been far more impactful.

Gunjan Saxena was not the first batch of officers in Indian Airforce, how could the makers get that wrong? There was another woman officer in the same Squadron who was not shown at all. Half an hour of research online and they would have known the facts. It's not right to shift the blame on the real Gunjan Saxena, as film making is an elaborate process. I feel cinema has to be responsible because it reaches so many people. If there were two girls, you should have shown two girls. But you don’t want to show the second girl because you want to showcase one character and you start making compromises with the facts which is wrong. The film had great actors, there was no need to take so many liberties. There were a lot of things that they did right, but when it comes to the authenticity too many cinematic liberties were taken. Especially when the film was using a real name then it is a problem, you can’t afford to go wrong.

Does misogyny exist in the armed forces?

Where is it not there? Why should we expect the armed forced to be any different? But the majority of them are not like that and men in the forces are extremely courteous. I really feel bad the way the male officers have been projected in the film. It looks like they have collected incidents from many lady officers' lives and put it all together. There is so much fun and friendship in the forces which was not shown at all. Flying is a serious job. There is an aircraft in your hands which is worth crores and then there are lives in the aircraft. It’s a serious job and that is why the trainers are tough. They are tough on both male and female cadets. There are exams that keep happening even when you reach high seniority. Taking women in the armed forces was a big change and it was difficult for both the male and female officers. What is shown in the film is humiliation, not toughness.