“He has remained grounded until now. His attitude hasn’t changed and I think that took him to places apart from being a great artiste,” said Harnaaz Sandhu while talking about Shah Rukh Khan. 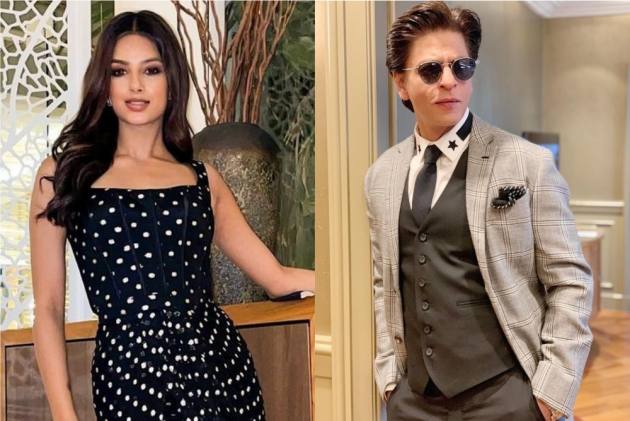 Harnaaz Sandhu, Miss Universe 2021, has stated that working with Shah Rukh Khan would be a dream come true. Sandhu, who has been performing in theatre for five years, has also appeared in Punjabi films. But the beauty queen shares that she won’t think twice if an opportunity to work with SRK presents itself in the future.

In a recent interview with Bollywood Hungama, Sandhu said, “It would be a dream come true for me to work with him and learn so much off-screen. How he takes his characters. How he gets into that zone. How he follows directions. It’s important for us artistes to understand off-screen methods too rather than just being onscreen.”

Sandhu added that Shah Rukh Khan has an impactful personality. “He has remained grounded until now. His attitude hasn’t changed and I think that took him to places apart from being a great artiste,” the 21-year-old said.

Sharing a memory of encountering a Shah Rukh fan, Sandhu said, “He has fans everywhere. I remember when I won, a person at the hotel started singing “Janam Janam”. He said ‘I know the song only because of Shah Rukh Khan’.”

Sandhu's favourite Shah Rukh Khan flicks include 'Jab Tak Hai Jaan,' 'Devdas,' 'Main Hoon Na,' and 'Kal Ho Na Ho.' She also stated that she admires her fellow beauty pageant holders. “I want to choose strong characters and break stereotypes like Priyanka Chopra, Lara Dutta, and Sushmita Sen. People get intimidated and influenced by movies a lot today. So I want to follow my passion and at the same time inspire people through movies.”