Virat Kohli will continue to lead the Indian cricket team in the Test and ODI format of the game. Bollywood actor Anushka Sharma has reacted after her husband, cricketer Virat Kohli announced his decision to step down as India's T20 captain after the T20 World Cup in UAE. 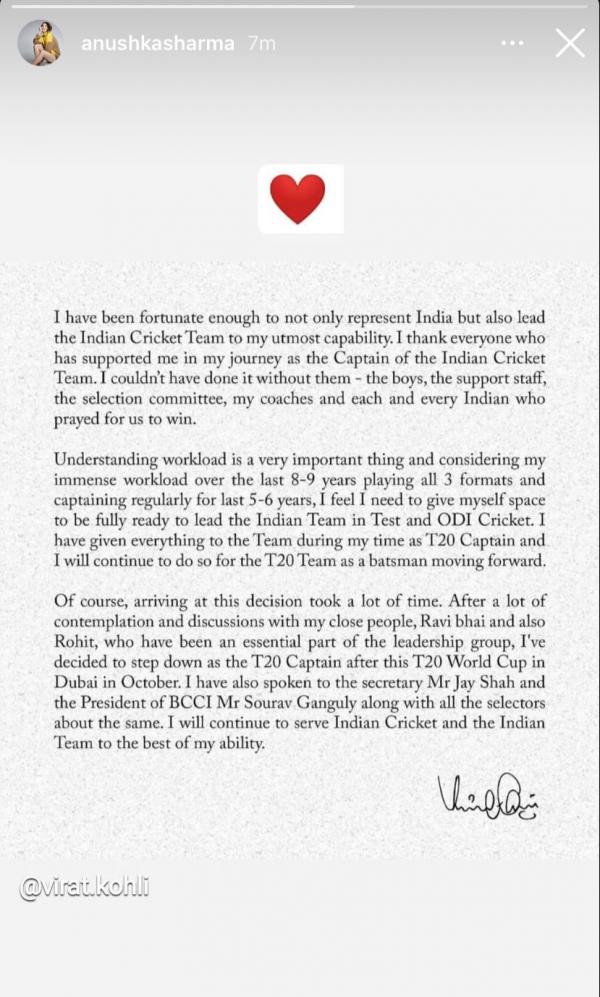 In his official statement, Kohli wrote, “Workload management as the reason to give up T20I captaincy. While reactions to Kohli’s decision continue to pour in, his wife Anushka Sharma took to her official Instagram handle and reshared his statement along with a heart on it. Looks like, Anushka is standing like a solid rock pillar next to her cricketer husband. To note, the star batsman in his statement said that he will continue to lead India in Tests and ODI cricket. The cricketer also added that he took the decision after consulting head coach Ravi Shastri and his teammates, including Rohit Sharma, and even conveyed the call to Board of Control for Cricket in India (BCCI) president Sourav Ganguly and secretary Jay Shah."

In a detailed statement, Virat wrote, "After a lot of contemplation and discussions with my close people, Ravi Bhai and also Rohit, who have been an essential part of the leadership group, I've decided to step down as the T20 Captain after this t20 World Cup in Dubai in October. I have spoken to the secretary Mr Jay Shah and the President of BCCI Mr Sourav Ganguly along with all the selectors about the same. I will continue to serve Indian Cricket and the Indian Team to the best of my ability." He also thanked everyone for the support during his journey as the Captain of the Indian Cricket Team.

Virat also added, "Understanding workload is a very important thing and considering my immense workload over the last 8-9 years playing all 3 formats and captaining regularly for last 5-6 years, I feel I need to give myself space to be fully ready to lead the Indian Team in Test and ODI Cricket. I have given everything to the Team during my time as T20 Captain and I will continue to do so for the T20 Team as a batsman moving forward."

Currently, Anushka Sharma is in Dubai with Virat Kohli, who will compete in the Indian Premier League (IPL) 2021 that resumes on Sunday. Virat Kohli will continue to lead the Indian cricket team in the Test and ODI format of the game.