Telugu superstar Nagarjuna went mighty emotional when superstar Aamir Khan went for a dinner with him. Here’s what happened that eventful night. 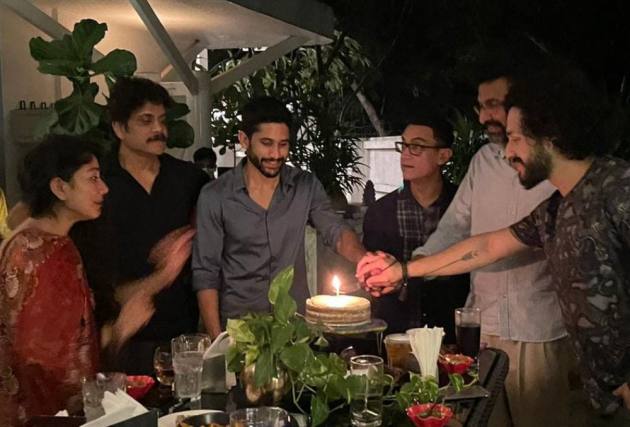 When superstar Aamir Khan went to Hyderabad recently to promote his ‘Laal Singh Chaddha’ co-star actor Naga Chaitanya's upcoming film release, 'Love Story', little did he know that he would end up stumbling upon some trivia about his own film.

Chaitanya's ‘Love Story’ that is releasing on the same date as his grandfather's (Akkineni Nageswara Rao) film ‘Prema Nagar’ had released exactly 50 years ago, was already an emotional and proud moment for the Akkineni family.

To everyone's surprise, there was another quirk of fate that connected Chaitanya with one of his grandfather's films.

At a dinner that Telugu superstar Nagarjuna and his family hosted for Khan after the promotional event, Nagarjuna realised that the character being played by his son in ‘Laal Singh Chaddha’ was called 'Bala Raju'. He was pleasantly surprised and also emotional as that was the name of an iconic character his own father had played in a film of the same name - 'Balaraju' more than 70 years ago!

Everyone cut a cake to mark this special moment for the family, which will also see two releases back-to-back (‘Love Story’ and Nagarjuna’s younger son Akhil Akkineni's ‘Agent’)

On the other hand, Khan’s ‘LSC’ is one of the most-awaited films and is all set to release on Christmas this year. Chaitanya is said to be playing the role of Khan’s best friend in the movie, which is an official adaptation of the Hollywood film ‘Forrest Gump’ starring actor Tom Hanks.