Stardom can be ephemeral but rarely does one come across as heart-breaking an example as that of Rajesh Khanna. 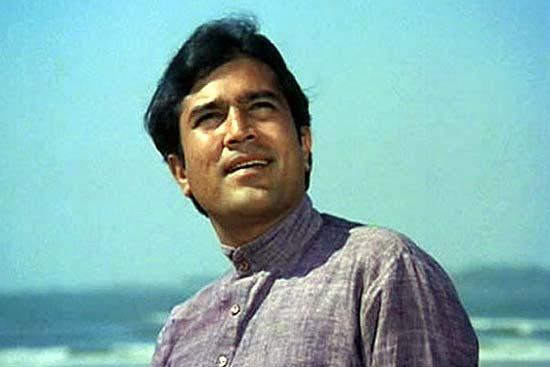 Nine years have passed by since Rajesh Khanna (1942-2012) died a lonely and bitter man after being shunned for years by his fans, who once wrote letters to him in blood professing undying love for him.

On his death anniversary today, a cursory look at the career of the actor, still acknowledged as the first superstar of Hindi cinema, makes one wonder how the same fans proved to be disloyal and fickle enough to switch allegiance to Amitabh Bachchan once he stormed the industry. It was unfair, to say the least.

Stardom can be ephemeral but rarely does one come across as heart-breaking an example as that of Khanna, a widely-loved star who was thrown from the pinnacle to the pits in a matter of a few years.

In spite of his undoubted talent and infectious charm that he exuded onscreen, Khanna was blown away by the Bachchan phenomenon. He was neither a pushover nor a fluke, as he had delivered 15 major hits between 1969 and 1971 but he fell by the wayside once Prakash Mehra’s Zanjeer (1973) heralded Bachchan as the new star with his angry young man persona.

Khanna was only 32 then when his fans began to desert him for their newfound love for Bachchan, who subsequently delivered mega hits in quick succession to dethrone him as the numero uno star. He tried his best to resurrect his fortunes but he could not ever replicate his success.

Back then, Bachchan had doubtless left everybody else behind and come to be known as a one-man industry at his peak but no other top star of his generation suffered as much as Khanna because of his phenomenal popularity. And it is not as though his contemporaries were better actors than him. Dharmendra, for example, braved the Bachchan storm with a string of mega-hits and so did other actors such as Jeetendra, Vinod Khanna, Shatrughan Sinha and Rishi Kapoor. Even seniors like Raj Kumar, Sunil Dutt Manoj Kumar and Feroz Khan held their fort in the seventies and early eighties.

In contrast, Khanna found himself down in the dumps, despite trying everything, including doing offbeat films with directors like Basu Bhattacharya (Avishkaar/1974) and Basu Chatterjee (Chakravyuha/1978).

In hindsight, it seems that there were ample reasons behind his downfall: some were beyond his control while others were certainly of his own making. Firstly, the taste of the audience had begun to change and he could not have done anything about it.

Khanna was primarily known for his roles in romantic musicals or family socials but such movies were quickly replaced by action flicks, the dacoit and smuggler dramas during the Bachchan era. Khanna was not considered fit for such movies.

Secondly, unlike other stars, Khanna refused to change with the times and continued to do the same kind of films. By the time he decided to follow the trend of action movies, it was too late. Thirdly, he also continued working with the same set of filmmakers such as Shakti Samanta of Aradhana (1969) fame, who were clearly past their prime.

Also, he failed to strike a rapport with people who could have helped him during his hard times. It is surprising that Khanna did not associate with Salim-Javed who had emerged as the most sought-after writers in the seventies. After all, it was Khanna who had helped them get an opportunity to write the screenplay of Hathi Mere Saathi (1971), a remake of a Tamil hit, in their struggling days.

It is said that the star writers later got miffed with his so-called starry airs, tantrums and attitude. Khanna did Zamana (1985) written by them many years later but it flopped.

Khanna also seemed to have a problem with Bachchan despite the fact that they worked together in two splendid Hrishikesh Mukherjee movies, Anand (1971) and Namak Haram (1974). They did not work together again. Worse, even Mukherhjee stopped working with him.

As far as Bachchan is concerned, he worked with almost all contemporaries in his multi-starrers, which were in vogue those days, but Khanna did not figure in any of them. Whether Bachchan refused to work with him or Khanna declined offers of all films with Bachchan is not known but it is true that Khanna remained wary of the multi-starrers for many years.

It was only in the eighties that he did multi-hero films like Kudrat (1981) Rajput (1982) and Dharam Kanta (1982). While actors such as Shashi Kapoor made the most of the Bachchan era by doing many films with him, Khanna continued to do solo movies.

Also, unlike Bachchan, he was not known as a punctual and disciplined star, He was an inveterate latecomer on the sets and would often keep his co-stars waiting for hours. It dissuaded many producers from signing him. Besides, on a personal level, he was an intensely private man and enjoyed the company of very few people in an industry where networking has always been an additional qualification.

Nonetheless, Khanna always delivered whenever he was given a good role. He gave fine performances in Amar Deep (1979) and Thodi Si Bewafai (1980) and staged a comeback of sorts with back-to-back box office hits like Souten and Avtaar in 1983. He also did a plethora of movies down south in the eighties and also produced movies like Alag Alag (1985), But he took a break to join politics at the insistence of Rajiv Gandhi just after he delivered a hit, Swarg (1990) with director David Dhawan.

On his return to the industry, he did few eminently forgettable movies, and when Rishi Kapoor’s first directorial venture Aa Ab Laut Chalen (1999) flopped, he chose to gradually retreat from the limelight quietly. His twilight years were apparently spent in loneliness but his aura as a star who led his life on his own terms continues to dazzle.