'War', being touted as one of the best action flicks ever from Hindi cinema, is definitely the most combustible movie of the year 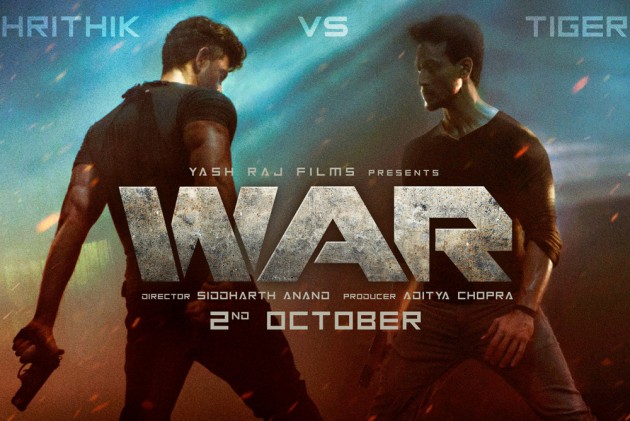 Quite a lot is at stake for Yash Raj Films, one of the top-notch Bollywood banners headed by the reclusive filmmaker Aditya Chopra of Dilwale Dulhania Le Jayenge (1995) fame, when War hits the screen on Gandhi Jayanti, a national holiday, tomorrow.

War, being touted as one of the best action flicks ever from Hindi cinema, is definitely the most combustible movie of the year, thanks to the combination of Hrithik Roshan and Tiger Shorff, who are pitted against each other onscreen for the very first time. The duo is widely acknowledged to be among the best of those stars who excel in dance and action sequences with consummate ease.

It is this quality that makes them hugely popular, especially among the youth who form the majority of the multiplex viewers these days. Their fresh pairing, therefore, has sky-rocketed the expectations over War.

Hrithik Roshan On Tiger Shroff: I Had Told Adi I Won't Do WAR Without Him

Hrithik is already on a high this year after delivering a big hit, Super 30, a biopic on Bihar mathematician Anand Kumar where he was in an altogether different avatar. In that film, he portrayed a poor teacher committed to helping underprivileged students forge ahead in life. But in War, he returns to his familiar terrain – an unalloyed masala entertainer “full of action and emotion”, as they say in Bollywood parlance. Tiger also has a massive fan following, as Baaghi 2's first day collections of more than Rs 25 crore had underlined.

War has already generated enough hype and it is expected not only to open with a massive collection but also hold on to it long after the first weekend -- unlike Yash Raj Films’s Thugs of Hindostan (2018), which ran out of steam after its record-breaking collection of more than Rs 52 crore on the first day of its release on Diwali last year. Trade experts expect that War may offset the losses Yash Raj Films might have incurred on the Aamir Khan-Amitabh Bachchan dud.

War, which features Yash Raj protégé Vaani Kapoor in female lead, has been directed by Siddharth Anand, an Aditya Chopra favourite known for making racy movies in the past such as Bang Bang! (2010), a Hrithik starrer, which was a remake of Tom Cruise-Cameron Diaz’s global hit, Knight and Day (2010).

Nonetheless, his latest film will not have a free run at the box office. It is pitted against the redoubtable Telugu superstar Chiranjeevi’s ambitious multilingual, Sye Raa Narasimha Reddy, based on the life of a great revolutionary who fought against the British in the pre-1857 years, which is also releasing on the same day. One of the costliest period movies ever made, it stars among others Amitabh Bachchan in a guest appearance, which has added to the overall appeal of the movie, especially in the north. Post Baahubali (2015) and its sequel, Baahubali 2 (2017), nobody can take any southern movie lightly now. It has all the right ingredients, including an awesome star cast and stunning visuals, to take the box-office battle into the War camp.

The makers of both these movies hope to make the most of an extended weekend and it will be interesting to watch which one emerges the winner in the box-office war by the end of the coming weekend.