In conversation with Giridhar Jha from Outlook, actress Sanya Malhotra says she is lucky to be working in Bollywood at a time when young actresses are getting exciting characters to play. 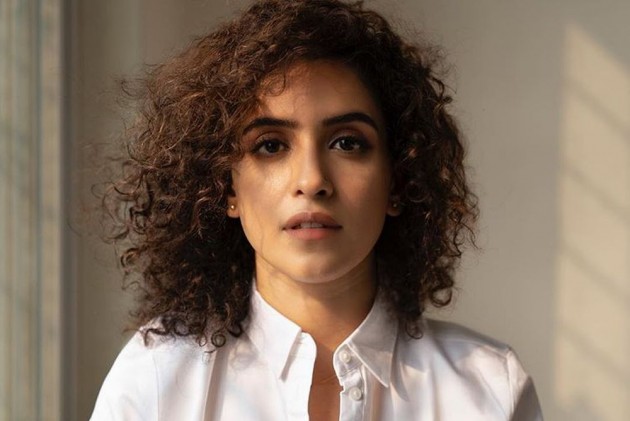 Sanya Malhotra, known as Dangal girl, made her debut in an Aamir Khan blockbuster and went on to a Vishal Bhardwaj movie, Pataakha, which did not click. However, her last release, Badhaai Ho, took the box office by storm because of its unusual content. In conversation with Giridhar Jha, she says she is lucky to be working in Bollywood at a time when young actresses are getting exciting characters to play. Excerpts:

The grand success of Badhaai Ho has taken everybody by surprise. Did you expect it to be such a hit when you had signed the film?

It is quite surprising to get such a response from the audiences. I am really happy and overwhelmed. It is a very joyful time for all of us. When I first heard its script I instantly agreed to do it because I knew that many people would like it. I am still receiving a lot of messages from the people who have watched it six to seven times.

It is great that such films have done exceptionally well at the box office in recent times. The audiences relate to good content and you cannot befool them by dishing out anything in the name of entertainment. They are very intelligent and will not waste money on anything which is not good enough. The major factor behind the success of a movie like Badhaai Ho is that the audiences are now more open to watching such films than ever in the past. I am happy to be part of the industry at a time when people are writing so many good scripts and characters. It is wonderful for both the industry and the audiences.

Some of these films have really strong, pivotal characters for the actresses. The industry rarely considered women-centric movies to be commercially viable earlier?

True. And it shows how things are changing for better in our society and in the industry. Earlier, the audience related to very few women-centric ventures but now, movies like Queen (2014), Kahaani (2015), Tumhari Sullu (2017) and Raazi (2018) become big hits. I think it has in a way empowered the women. Their success gives us some idea about the way society is changing.

Some of these movies have young actresses playing unconventional and 'risky' characters. They are having a whale of a time. Isn't it?

I believe that the box-office success of these movies has heralded this change. As an audience, I had also grown sick of watching the same stereotypical female characters doing nothing except singing and dancing around the trees . In most of the movies, they would get a few scenes to play a damsel-in-distress, who is ultimately rescued by an all-powerful hero. It augured well for the hero’s image but nobody cared for the heroine. I am glad that phase is over now. People now want to watch real characters. When they see the women doing so well in different fields in real life, they want to see such characters in the movies as well. They also want the women characters who take some stand. In Badhaai Ho, when everybody frowns upon the sex life of an elderly couple, my character takes a stand saying it is their life and they can do whatever they want to do. She says that it is their life, they can have sex at that age, and who are the others to judge? As an audience, I like to see the portrayal of strong women in cinema.

You did a rather unconventional role of a village girl in Vishal Bhardwaj’s Pataakha and put in a lot of hard work for it. Its commercial failure must have been rather disappointing for you?

Actually, that is the only character I have played so far which was so different from me. It may not have done well commercially but I don’t regret anything about that film. For an actress like me, it was not a failure as such because of the sheer joy of doing this film. We went to Rausi village in Rajasthan, stayed there for five days at the house of its writer Charan Singh, and did a lot of things to prepare for the role. We would get up at 4:00 a.m. and do all the chores that a village girl is supposed to do. We would plaster cow dung cakes on the on the walls, make chapattis on clay oven, milk the cows and fetch water from a well in an earthen pot. It was all part of an amazing learning experience.

You had also undergone extensive training to prepare for your role in Dangal? How different was it from that experience?

We had gone through a wrestling training for Dangal which helped us learn a lot of techniques. We trained under the national wrestling coach Kripa Shankar Bishnoi. But Pataakha was an altogether different experience for us. It was very emotional from the training we had for Dangal. The wrestling training helped us get into the character but we had eight to nine months to learn it. We also had to get the Haryanvi accent and the body language of a wrestler right. It was more emotional than physical for Pataakha. We had to understand why the characters of the two sisters hated each other. We had to work at various emotional levels.

How was the experience of staying in a village?

The villagers at Rausi worshipped the cows and would tell us the importance of cow dung. The entire village would follow us all through our training. At least 30 to 40 women would join us whenever we would go to fetch water. Vishal ji wanted us to live the characters of village girls and that’s why we stayed in the village. He would discuss each scene with us before shooting and subsequently improvise it, if needed. If you have seen Pataakha, the characters of the two sisters Badki (played by Radhika Madan) and Chhutki are always doing something or the other in every scene.

Did it really help you while shooting for the film?

This training really helped me a lot. For me, it was very important to get into the skin of character because I am not loud like Chhutki in the real life. So I had to get out of my comfort zone before going on the sets. Normally, in a new film, it takes a day or two to understand a character but it was a breeze right from the word goes during the shoots for Pataakha. We were so well prepared that we shot the entire film in 28 days in a beautiful village near Mount Abu.

After playing a Haryanvi and a Rajasthani girl in your first two movies, it must have been a relief to play yourself, a Delhi girl, in Badhaai Ho?

Although I had shot Badhaai Ho before Pataakha, it was released later. But playing a Delhi girl was definitely a relief. In Dangal or Pataakha, my characters did not look like myself.

Dangal was a big break in an Aamir Khan project. How did you feel when you finally got the role of a young wrestler girl?

I still remember the day we got to know that Fatima Sana Sheikh and I would play Gita Phogat and Babita Phogat respectively. I went back home and then went to a beach in Mumbai along with my mother. Both of us started crying. It was simply unbelievable that I had got the role and the opportunity to work with Aamir Khan. I had never ever imagined that it would change my life. I will always be grateful to Aamir and everybody else associated with the film.

How difficult were struggling days before you made your dream debut?

I shared a 2BHK flat with four people before Dangal happened. I had no idea about the show business when I came here. But I had fallen in love with this beautiful city and was enjoying all the freedom. I got to know about the auditions through one of my acquaintances but I never went for any random audition. I was in contact with only one casting director. I did some ads for about a year before I got the call for Dangal, which changed my life forever.

Bollywood was recently rocked by the #MeToo movement with many girls calling out the industry people for sexually exploiting them? Do you think it will bring about any change?

It would definitely usher in the change and I am glad that this has happened. People are coming out and talking about it now. It takes a lot of courage to do so. I don’t want the #MeToo movement to fizzle out. But sexual harassment should also stop in other places and institutions. We should respect people who have spoken out and protect those who have suffered.

You are a trained dancer yourself and you have even choreographed a song in Secret Superstar (2018). But none of your films so far has showcased your real dancing talent. Don’t you want to a film based on a dancer’s life?

I would literally beg to dance on screen. I am glad I got to dance in Badaahi Ho in a promotional song but yes, I want to play the role of a full-fledged dancer in a film where I would be dancing in front of the camera from the beginning till the end.