In conversation with Outlook's Lachmi Deb Roy, Director Shoojit Sircar talks about the challenges of working together with Amitabh Bachchan and Ayushmann Khurana, and the future of cinema halls in the time of OTT platforms. 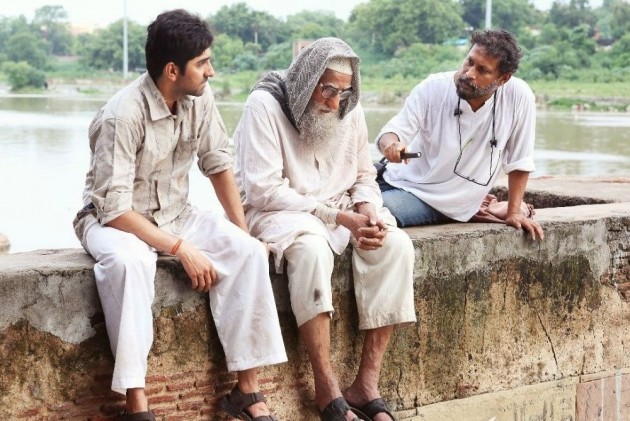 Award-winning director Shoojit Sircar’s new film ‘Gulabo Sitabo’ will soon be out on OTT platform Amazon prime. He speaks to Lachmi Deb Roy about how big a challenge it was to handle both Amitabh Bachchan and Ayushmann Khurrana on the sets and why they chose an OTT release over theatrical release. Excerpts:

Q: ‘Gulabo Sitabo’ is a big film with a big star cast. Why did you choose an OTT platform for its release?

One of the main reasons was the coronavirus lockdown. Had it not been for the lockdown, the film would have released in theatres as we had already announced a release date. For a long time, I had been in discussions with digital platforms like Amazon and Netflix. I was also thinking about other options. When the whole nation went under a lockdown, I thought, why not take the plunge? And here we are. We will get to know what happens after June 12 – release date of the movie on Amazon Prime. But so far it is all good.

Q: How was it like working with Ayushmann Khurrana and Amitabh Bachchan together?

I have worked with Amitabh Bachchan in ‘Pink’ and Piku’. As soon as one film gets over, he is behind me, asking “Which is the next film you are going to do with me?” We already had a plan to work together for ‘Gulabo Sitabo’. He is like a small kid behind you, always wanting a new toy to play with. That is how it is with him. But it is always fun because he is ready to experiment and take up new challenges. And mostly my films don’t have those regular characters that we generally get to see in most other films. The roles are quite challenging and he loves to put himself in those challenging situations. His enthusiasm is always high and he knows how to satisfy the director to the fullest. There is so much to learn from him. He always has a beautiful positive energy on the set, even at this age.

With Ayushman, I am coming back after eight years but he has always kept in touch with me. The last movie we did was ‘Vicky Donor’. It took us a little time to get back into our old groove. He is a lovely person and there is a lot of mutual respect because we almost started our journey together. I would say that with him, it is like a family reunion. The biggest challenge for me was to get both of them in front of the camera and make them perform together. As you know, when Bachchan is on the set, he can sometimes be overpowering in terms of his aura. That took a little time, but once that was done, working together with both of them was great fun.

Q: This time you have chosen Lucknow as the location for your film, any specific reason for it?

Most of my films have been based in Delhi or Kolkata. I am well versed with Delhi because I grew up in that city and Kolkata is where I presently live. The story was rooted in Lucknow because Juhi Chaturvedi, who wrote the script for the film, knew Lucknow very well. For me, it took a little time to understand the nitty-gritties of Lucknow. I had to make a lot of visits because the film didn’t belong to the contemporary side of Lucknow. We wanted to keep the old Lucknow charm. Like all other characters, Lucknow is a very important character in the film. For all my films, location plays an important role because I like to give the authentic look of the place. And for that, one must go there and shoot at the right spots.

Q: The film is about a landlord and his tenant. There are a lot of fights involved, how was it like to handle both the actors in this situation? And can you tell us a bit more about the film?

I won’t say it was difficult to handle, but it took a little time to get into the groove. Both of them had a lot of confidence in me and they completely surrendered in the way I wanted to craft and vision the charters. There were times during the shoot when I had to perform and be like the characters. As you have seen in the trailer, they live in the same haveli and it is the old part of Lucknow in which they move around. I wanted the camera to be present in the middle of the people of Lucknow. The two stars are not the only characters we have in the film; instead, there are many others who became a part of the ‘Gulabo Sitabo’ world.

Q: You have also completed shooting for ‘Sardar Udham Singh'. How are you planning to release it, digital platform or cinema halls?

We have just finished the shoot and nothing has been planned as of now. We are still in the middle of post-production and we need some more time to decide.

Q: How are you making the most of the lockdown situation?

I am in Kolkata and most of the time goes in my housework, cooking and cleaning. It is quite exhausting and I don’t really get much time to do anything else. It’s just housework, that’s it.

Q: Any Lessons learnt from the Lockdown?

I love the lockdown because I live in Kolkata and work in Mumbai. And whenever I am in Kolkata, I live like this only, in a lockdown like state. I am mostly at home and I do my housework, I read and I love watching documentaries. In short, I love staying at home.

Q: We all know that the digital platform is the future of entertainment. What is the scene going to be like post-lockdown? Will people completely lose the charm of going to the cinema hall?

The magical experience of going to the cinema hall will never fade away. Cinema will always be cinema. Having said that, I don’t think the lockdown has accelerated the success of OTT platforms. I think the process had already started much earlier. In the last two or three years, we have seen a lot of audio-visual and documentary series on digital platforms. The course was already there and it was supposed to happen anyway. I have always felt that both the experiences -- watching a web series or a film on a digital platform and going to a cinema hall – will co-exist.

Q: How are films going to be shot post-lockdown, especially the intimate scenes? Are the actors going to use masks?

Q: To keep in touch with the craft, what is your suggestion to new filmmakers as they are not out there in the field anymore?

The most important thing that I tell everyone is that you must read as much as you can because I have seen a lot of youngsters who come to work with me, they have stopped reading and they are only watching. Reading is the most important thing one can do to know about the craft, especially for directors and actors. Again, one needs to be aware of what’s happening around them. If one can on these two areas concentrate, then a lot of personal growth can happen.