‘I Was Intimidated’: Director Abhishek Jain On Making His Bollywood Debut And Working With The Cast

In an exclusive conversation with Outlook, Abhishek Jain talks about his process as a filmmaker, creating movies for OTT platforms and making his Bollywood debut with 'Hum Do Humare Do' 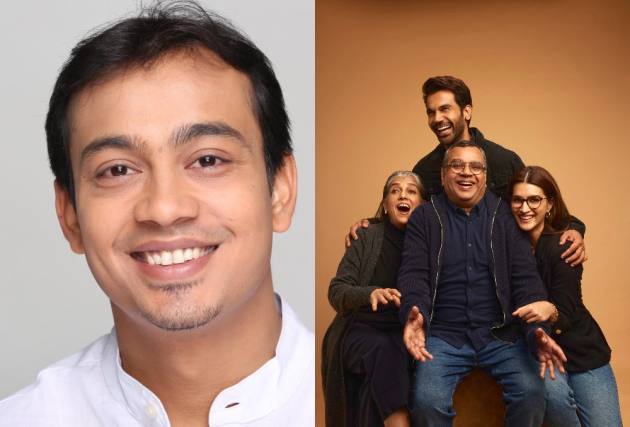 Despite the fact that he is making his debut as a director in Bollywood, there is something about Abhishek Jain, which explains that his upcoming film ‘Hum Do Humare Do’ is not the first time he is directed a feature film. Having directed Gujarati films in the past, Jain, not only understands the technical aspects behind filmmaking, but also understands the importance of “empathy” while telling a story.

That probably explains why his Bollywood debut features the likes of popular actors Rajkummar Rao, Kriti Sanon, Ratna Pathah Shah and Paresh Rawal. In an exclusive conversation with Outlook, Abhishek Jain talks about his process as a filmmaker, creating movies for OTT platforms and making his Bollywood debut. Excerpts:

What inspired you to make 'Hum Do Humare Do'?

So, my inspiration is coming from the fact that I have been raised watching films collectively and ‘Hum Do Hamare Do’, and any other films of mine in the past have naturally told a story which has got family values attached to it. Adding to this background, in the last 18 months, we all have understood the significance of families, thanks to the lockdown. The film focuses on telling the story that families are not necessarily made of relationships of blood, but by affection and empathy. Today we seek family in our friends, neighbours and sometimes strangers too.

Tell us a bit about your filmmaking process, pre-production, casting, shooting and post production?

The process of making films is like living a different life altogether and it does get tiring or stressful at times, but my process has been spiritual where I consider myself just as a medium (the chosen one) to tell a story that the universe has conspired to convey through me. Talking about the nitty-gritty of the entire process, it is a collective and collaborative medium, I adore the way we all become one family and help each other in telling a story with utmost excitement and zeal. My process in all the particulars of filmmaking has been organic, based on my guts, intuitive and impulsive. I do have a plan in place but then I leave it to the eventualities to guide me through at every stage.

How was it working with the likes of Rajkummar Rao, Kriti Sanon and others?

I had never interacted with these actors until I started the narrations, initially I was a little intimidated by their body of work and experience they collectively bring on board, but I am only grateful to them for making it easy for me, making me feel family and collaborating towards the betterment of the film. One common factor between all the actors was that they never cared about the individual as much as they cared about the script and as they say, nothing comes first before the film. They are quite professional actors and inspite of that, right at the beginning of the shooting, we felt like we have been knowing each other since ages, such was the bonding that we all developed. Be it communication on the set, camaraderie off the set and process of approaching each scene at a time was very constructive.

As a filmmaker, how important is it for you to resonate with the story? Is it necessary that every story you tell on screen, you have to be able to relate/empathise with it to be able to create a more believable/relatable film?

If I am not able to resonate with the story, not only will I end up making a shallow film but also stop discovering my own self. The eventual outcome is not only to make a relatable story, but to be able to tell a story that I believe in. Filmmaking, for me, is an inside-out process and not vice versa; thus, if I do not resonate with the story, it is going to be difficult to live with it, not only while making the film, but forever. What I have learned over the years, especially in the film school, is that people tell stories coming from their lives and considering this as such an inherent part, I feel resonance to the story is of utmost importance. Only when I will resonate and equally empathise, is when I will have my point of view and the outcome of it will be a similar reciprocation from the audience.

With a lot of debate around opening of theatres etc, do you think it’s probably time for production houses, to probably reinvent and adapt with the changing times, and start focussing more on creating web content?

Cinema is a relatively new art form and it works hand in hand with technology too. So, over the years there have been umpteen number of technological advances that cinema has adapted itself to. The digital streaming services is one such advancement, but over the years, if you notice, these technological developments have not eliminated any of the earlier mediums or streams, it has only added value to the storytelling medium and that value addition has only helped the storytellers to increase their outreach. I see OTT as one of the other streams and everything shall co-exist, bringing the consumer of the story, in the centre-stage. Audience convenience and choices, makes them even more powerful and in return its challenging the content to become relevant. Cinema halls and OTT platforms will co-exist and make the audience choose their viewing pattern in a more convenient yet democratic way.

And finally, since there are no Friday box office numbers, is there anything that keeps you up at night?

I joke about this with my fellow filmmakers that, like in the childhood we used to get mark sheet from school, it was an anxious moment such was the box office numbers, but with no mark sheet, you only know that you have fared well, if you feel you have fared well, without any delusion attached to it. As a maker, I have mixed feelings, on one hand I want to see the box office report, because that is straight away barometer to gauge the audience's response and on the other hand it helps me not worry about the outcome and tell the stories that I really feel for. In both cases it is fair but I would rather choose a mark sheet to know the progress and shortcomings. With OTT, I am sure there must be a system to share the numbers of viewer engagement, data analytics is so powerful these days, it is easier, I am sure.