In a long note posted on her social media account, Miesha Iyer has asked if Karan Kundrra and Tejasswi Prakash would also be evicted from the 'Bigg Boss 15' house, much like her and Ieshaan Sehgal.

Actors Miesha Iyer and Ieshaan Sehgal, previous 'Bigg Boss 15' competitors, were removed from the competition together earlier this month. Iyer has now asked on her Instagram story if Karan Kundrra and Tejasswi Prakash will be booted from the show for falling in love.

Jay Bhanushali, Karan Kundrra, Tejasswi Prakash, and Vishal Kotian ousted Miesha earlier this month, citing their lack of contribution to the competition as well as the couple's 'love angle.' Sehgal was ousted the next day, just a day after Iyer.

Iyer wondered aloud on Instagram if Kundrra and Prakash, who are forming a close friendship within the house, might be eliminated for the same reason. 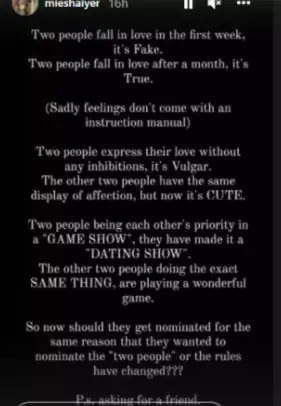 Iyer discussed her friendship with Sehgal after being ousted from the show.

"We're dating," she told India Today in an interview. "And since he has been evicted, we have been inseparable. It has been a month of us dating but we are pretty much together. We went out on a dinner date last night.” "Love comes to you when you are not looking for it. Before I entered Bigg Boss, I was sure I would not get into a relationship or fall in love. Then Ieshaan happened and I was like oh ***t, now what? It was totally unexpected. It was such an intense and strong connection that it was undeniable." the Big Boss contestant added.

Iyer and Sehgal were recently spotted in Goa, and they documented their trip on Instagram.