With shows such as ‘Squid Game’ and ‘Black Mirror’ doing extremely well online, and several Indian shows, which have several dark themes, get popular we find out whether the darkness is organic or forced… 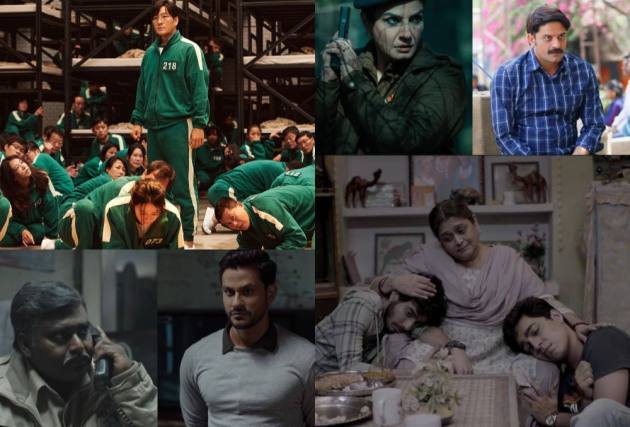 As stories get more realistic and more authentic, tendency to revel in darkness, seems unavoidable and too forced, but whatever be the case, audiences are consuming content with dark elements with a lot of gusto. Netflix’ Squid Game, which is described as ‘Parasite’-meet-‘Hunger Games’- ‘Black Mirror’, was the most watched web series in the history of OTT platform. The series, which is a fierce commentary on the class-divide that exists, not just in Korea, but the rest of the world as well, was watched by over 142-million-member households and amassing 1.65 billion viewing hours during its first four weeks from launch.

“Today, every story can find its audience without limitations on format, language or duration. What matters is that the stories should be unique, the treatment be novel and the narrative compelling,” Spokseperson at Netflix tells us.

Closer To Home, in India as well several titles on OTT, such as 'Tabbar', 'Human', 'Aranyak', 'Paatal Lok', 'Sacred Games' and many others, which might be different because of the contrasting themes and stories, yet there is a universal element of darkness uniting these titles which perhaps eminate from the fact that stories are rooted in realism, and are more bent on exploring the grey shades of the characters.

“I strongly feel that because of the OTT platforms, Indian audience has evolved enough to accept dark, gloomy worlds filled with morally conflicted protagonists. As a public, we yearn for the good person to win, his/her virtue to be rewarded. And every time we turn on a dark show, we're like, 'There's got to be a reason for his/her downfall!”. And that's why we keep watching it, because we think that the good person will eventually win, he/she will be rewarded and everything's going to be great,” says Harman Wadala, who co-wrote 'Tabbar’, which has received rave reviews and was one of the most popular shows, last year.

“Personally, I don’t think there’s any formula to make a good dark show (or any other show/movie). Writers need to have a fresh perspective towards the society, and then carefully package it in a tight entertaining story,” he adds.

OTT platforms, as per one’s own comfort offer wide variety of titles, in various languages, different formats, which has empowered the audience to look for stories which are rich in authenticity and realism, unlike theatrical films, which are still bogged down by the duration and governed by certain market forces.

“There is an increasing preference for stories that reflect viewers’ daily lives more authentically. Authenticity is really the key word here. Audience is looking for real experiences that are true to the story. Our content is as good as the creators we work with, so we are partnering with master content creators and studios to bring some of the best quality content to our audiences,” says Nimisha Pandey, Chief Content Officer, Hindi Originals, ZEE5.

These platforms enable creators to tell stories encompassing a gamut of emotions, where it’s not always perfect and bright. OTT has over the years made it possible to present such stories as opposed to other platforms like cinema with a fixed screentime, or TV which has to conform to its limitations as a family viewing medium. OTT on the other hand, has allowed the creative freedom to narrate the stories and characters in their real form.

“OTT by nature gives us an opportunity to have a fresh approach in terms of storytelling. We are used to 120–150-minute stories that are told through movies and then long format through television. However, OTT enables us to narrate a story in 400-600 minutes with each season. Therefore, the focus is on detailing, authenticity, characters and their well-defined graphs, nuances, and its cultural rootedness,” says Ashish Golwalkar, Head, Content Sony Entertainment Television & Digital Business, Sony Pictures Networks India.

He however refuses to believe that the consumption of all the recent popular titles on OTT is due to the presence of dark elements in it.

“No, we don’t believe that stories always need to have these elements. These are early days of OTT and hence some stories (majority perhaps) told so far might have certain dark/grey shade but as this space evolves, we will see more variety,” he adds.

One of the biggest reasons in the variety of stories on OTT platforms in India, is the growing number of stories coming from the hinterlands, instead of the metros and bigger cities in the country. They continue to grow at a faster rate than metros with audiences having gotten introduced to OTT streaming content during the lockdown and certain entertainment formats like movies in theatres were not available.

“We seek to serve the diverse tastes and preferences of customers in India, creating a content strategy that caters to our multifaceted culture. Our viewers are logging-in not just from top-tier cities, but from tier 2 and 3 cities as well. And, our endeavour has been to explore this rich and diverse storytelling tradition of the country,” says Aparna Purohit, Head of India Originals, Amazon Prime Video.

The change in focus has also meant that that the role of casting director has become crucial in getting the right actors for the story and this period has become a blessing for actors who were not fitting the larger-than-life hero image.

“Our casting decisions are made basis the characters to be portrayed and not for star power. For example, we believed Manoj Bajpayee to be the most suited for the character of Srikant Tiwari in 'The Family Man' series and nobody could have played the role of Kaleen Bhaiya better than Pankaj Tripathi. We push to find and promote new and local talent. Over 50% of our released slate has fresh talent from across the country and this is even higher for our slate in production at close to 70%.” she adds.

So, while, every story has a different emotional trope that connects with a certain audience segment, stories that are relatable and draw from the viewers’ lives themselves, a good story, is one that is authentic, relatable and inspiring coupled with the vision of the creators.

“I believe there was always darkness we didn’t have enough screen time to show it. Now you can do justice to the nuance of darkness. With the medium, one has the freedom to showcase uncomfortable themes in a story in an engaging yet responsible manner.''

''These stories are getting watched and they are living up to the performance pressure. The audience is looking forward to such stories, since they can access other stories on different mediums. Stories that break the mould of what heroes should be like and are flawed, are easier to connect because they are more real and more entertaining to watch as well.” says Pandey.